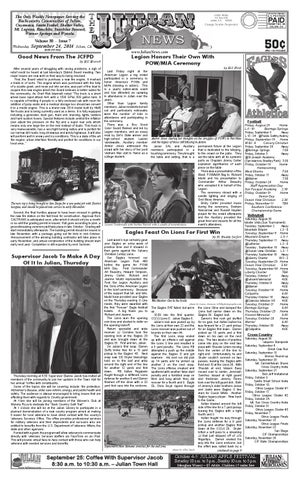 Good News From The JCFPD

After several years of struggling with vexing problems, a sigh of relief could be heard at last Monday's District Board meeting. Two major issues are now well on their way to being resolved. First, the Board voted to purchase a new fire engine. It involved a trade-in of sorts. The engine which was purchased with the help of a sizable grant, and never put into service, was part of the deal to acquire this new engine which the Board believes is better suited for the community. As Chief Rick Marinelli noted "The truck is a short wheel base rapid attack 4x4, with a 1500 GPM, 500 gallon tank. It is capable of holding 4 people in a fully enclosed cab with room for addition of jump seats and a medical storage box should we convert it to a medic engine. This is a brand new 2014 model built by HME fire trucks and is being currently used as a demo. It is fully equipped including a generator, deck gun, foam unit, shelving, lights, ladders and hard suction hoses. Special features include central tire inflation (can adjust tire pressure on the fly) and a super rear axle which means only one large tire on the rear instead of duals. This truck is very maneuverable, has a very tight turning radius and is perfect for our narrow dirt roads, long driveways and windy highways. It will also will perform well in snowy and icy conditions. This is a state of the art fire engine, urban interface friendly and perfect for conditions in our local area. "

The new rig is being brought to San Diego for a new paint job with District insignia, and should be placed into service in early November. Second, the final hurdles appear to have been crossed in getting the new fire station on the fast track for construction. Approval from CALTRANS is anticipated soon, after which it should only be a month or so until the grading permit is issued. If all goes according to plan, a groundbreaking ceremony will take place in late October. Grading will start immediately afterwards. The building permit should be issued in late November, with a package going out for bids in mid-October. Announcement of the winning building contractor will take place in early November, and actual construction of the building should start early next year. Completion is still expected by next Summer.

Supervisor Jacob To Make A Day Of It In Julian, Thursday

Thursday morning at 8:30 Supervisor Dianne Jacob has invited all members of the community to join her upstairs in the Town Hall for her annual “coffee with constituents. Some of the topics she will be covering include: fire protection, Alzheimer’s disease, elder care reform, energy, and public health and safety. The audience is always encouraged to bring issues that are affecting them with regards to County government. At 11am she will be joining members of the Women’s Club at Wynola Pizza to dedicate the “Back Country Quilt Trail” At 1 o’clock she will be at the Julian Library to participate in a planned demonstration of a new county program aimed at making it easier for rural veterans to have direct contact with the county’s Veterans Services Office. The office provides professional services for military veterans and their dependents and survivors who are entitled to benefits from the U.S. Department of Veterans Affairs, the state and other agencies. Funded with a grant, the program will allow veterans to communicate directly with Veterans Services staffers via FaceTime on an iPad. This will provide virtual face-to-face contact with those who can help veterans with needed services and benefits.

Legion Honors Their Own With POW/MIA Ceremony

Last Friday night at the American Legion a big crowd participated in a ceremony to honor America’s POWs and MIAs (missing in action). This is a yearly nation-wide event and has attracted an upswing in attendance in Julian over the years. Other than Legion family members, Julian residents turned out and particularly noticeable were the number of kids in attendance and participating in the ceremony. There was a Boy Scout Color Guard flanked and led by Legion members, and an essay read by Girl’s State winner and high-school student Lauren Vandewalle, Auxiliary member Amber Jones addressed the crowd with her story of her post Vietnam War visit to Hanoi as a college student.

Amber Jones sharing her thoughts on the struggles of POW’s in Viet Nam and the legacy of those still Missing in Action Junior SAL and Auxiliary permanent fixture at the Legion members participated in a that is dedicated to the Missing, touching ceremony. They brought to the crowd on the patio. They the table and setting, that is a set the table with all its symbolic parts as Chaplain Jimmy Carter explained significance of each piece on the table There was a presentation of the Black POW/MIA flag to Richard Mudd and his presentation to Commander Arthur Beaudry who accepted it in behalf of the Legion. The ceremony closed with a candle lighting and singing of God Bless America. Emily Carter provided music during the ceremony, Graham Nancarrow and Russell Hayden played for the crowd afterwards and the Auxiliary provided the great food and deserts for all the event’s attendees. Lauren Vandewalle with brother Patrick with a candle of remembrance

Eagles Feast On Lions For First Win Last week’s bye certainly gave your Eagles an extra week of practice time and it showed in their game against the Calvary Christian (Vista) Lions. Our Eagles honored our American Legion Post 468 before the game for POW/ MIA Day. Post Commander Art Beaudry, Howard Simpson, Jimmy Carter, Richard and Jeanne Mudd represented the Post, the Legion Auxiliary and the Sons of the American Legion in the brief ceremony. Because of the support that Mr. and Mrs. Mudd have provided your Eagles on the Thursday evening O-Line meals, they were awarded with the first “Forever” Eagle football tickets. A big thank you to Richard and Jeanne. The Lions won the opening coin toss and elected to defer on the opening kickoff. Return specialist and wide receiver JJ Corrales took the opening kick at the Eagles 20 and was brought down at the Eagles 35. First and ten, Julian. On Julian’s first snap, Darren Duffy broke free for a 13 yard pickup to the Eagles’ 45. Next snap saw QB Skyler Marushige hold on to the ball and whip around the right end of the line for another 12 yards and first down. RB Kellen Regalado fought through a stiffened Lions defense for another 8 and Darren finished off the drive with a 32 yard foot race into the endzone.

Win Number One in the books

The Eagles PAT failed, but we’re up. 10:59 into the first quarter, CC(V) Lions 0. Julian Eagles 6. Julian’s kick was picked up by the Lions at their own 22 and the Lions receiver was pushed out of bounds on their own 44. The first Lions snap ended up with an offside's call against the Lions O line and resulted in a 5 yard penalty. The Lions RB attempted a push up the middle against the Eagles D and got nowhere. His next run did pick up 14 yards and he picked up another 3 on the next snap. The Lions offense creaked and sputtered with another false start penalty and a fumbled snap on third and long which they did recover for a fourth and 9. Eagle DL Chris Boyd ripped through

the Lions Oline and dumped the Lions ball carrier down on the Eagles 39. Eagles’ ball. Darren’s first rush got stuffed for no gain, but Kellen bulled his way forward for a 21 yard pickup for an Eagles first down. Darren picked up 10 yards and a first down on his own on the next play. The two weeks of practice came into play on the next two plays with Shuuluk Linton moving from the center of the line to right end. Unfortunately, he and Skyler couldn’t connect on two passes, leaving the Eagles with third and 10 at the Lions 30. With Shuuluk at end, Mason Baay moved over to center, Jeremiah Sanchez stayed at right guard and freshman Jeremy Flores took over the left guard slot. Both of Jeremy’s older brothers Jesse and Justin were Eagles O line stars for Coach White. Another Eagles legacy player. Now back to the Game. Kellen blasted around the left side of the line for a 7 yard pickup leaving the Eagles with a tight fourth and 3. Kellen fought his way through the Lions defense for a 9 yard pickup and another Eagles first down at the CC(V) 20. Skyler lofted a soft pass to a streaking JJ that just skipped off of JJ’s fingertips. Darren snaked his way into the Lions endzone, but the effort was called back by a continued on page 9