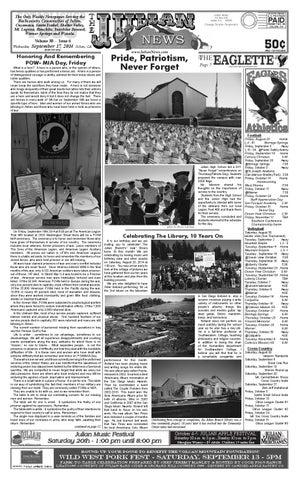 What is a hero? A hero is a person who, in the opinion of others, has heroic qualities or has performed a heroic act. A hero is a person of distinguished courage or ability, admired for their brave deeds and noble qualities. There are heroes who walk among us. For many of them we will never know the sacrifices they have made. A hero is not someone who brags eloquently of their great deeds but rather lets their actions speak for themselves. Most of the time they do not realize that they are a hero and would deny it but it does not change the fact. There are heroes in every walk of life but on September 19th we honor a specific type of hero. Men and women of our armed forces who are Missing in Action and those who have been held or held as prisoners of war.

On Friday, September 19th 2014 at 6:00 pm at The American Legion Post 468 located at 2503 Washington Street there will be a POW/ MIA ceremony. The ceremony is to honor and remember those who have given of themselves in service of our country. The ceremony includes local veterans, former prisoners of war, junior members of The Sons of the American Legion, and American Legion Auxiliary members. All across our nation in VFW’s and American Legions there is a table set aside, to honor and remember the members of our armed forces, who were held prisoner or are still missing. All wars have claimed prisoners of war and every conflict includes those who are never found. Since America entered WWI in the final months of the war, only 4,120 American soldiers were taken prisoner; out of those, 147 died. In World War II, it was brutal to be a Prisoner of war. American service men were mistreated, tortured and even killed. Of the 93,941 American POWs held in Europe during the war, only one percent died in captivity; most of them from combat wounds. Of the 25,600 American POWs held in the Pacific during the war, 10,650 or nearly 45 percent died, most of starvation and disease, since they were worked incessantly and given little food, clothing, shelter or medical treatment. In the Korean War, POWs were subjected to psychological warfare where they were forced to endure indoctrination efforts. Of the 7,000 Americans captured only 3,800 returned alive. In the Vietnam War, most of our service people captured, suffered intense mental and physical abuse. One hundred fourteen of our service people died in captivity, 651 were returned and many are still Missing in Action. The current number of personnel missing from operations in Iraq and the Persian Gulf is five. Life is unfair - sometimes to our advantage, sometimes to our disadvantage. We will all experience disappointments and crushing events somewhere along the way, setbacks for which there is no “reason,” no one to blame… What separates people, is not the presence or absence of difficulty, but how they deal with the inevitable difficulties of life. It is these men and women who have dealt with extreme difficulty that we remember and honor on POW/MIA Day. Those who have served, and those currently serving in the uniformed services of the United States, are ever mindful that the sweetness of enduring peace has always been tainted by the bitterness of personal sacrifice. We are compelled to never forget that while we enjoy our daily pleasures, there are others who have endured and may still be enduring the agonies of pain, deprivation and imprisonment. There is a small table in a place of honor. It is set for one. This table is our way of symbolizing the fact that, members of our military are missing from our midst. They are commonly called POWs or MIA. They are unable to be with us, and so we remember them. The table is set, to show our everlasting concern for our missing men and women. Remember. The table set for one is small. It symbolizes the frailty of one prisoner against his oppressors. Remember. The tablecloth is white. It symbolizes the purity of their intentions to respond to their country's call to arms. Remember. The single rose displayed in a vase reminds us of the families and loved ones of our comrades in arms, who keep faith, awaiting their return. Remember. continued on page 12

Julian High School led a 9/11 “Never Forget” remembrance on Thursday(Patriots Day). Students prepared the campus with over 3000 flags. Mr. Munson shared his thoughts on the importance of service to the country. Students from the High School and the Junior High had the opportunity to interact with some of the veterans from our local Legion Post 468 and thank them for their service. The ceremony concluded and students returned to the schedule for the day.

Celebrating The Library, 10 Years On

It is our birthday and we are inviting you to celebrate! The Julian Branch’s” new” library turns 10 this month! We are celebrating by having music and birthday cake and other snacks on Saturday, August 20, 2014 at 1:00 pm. You may arrive early to look at the collage of pictures we have gathered from our ten years at this location and also from the building process. We are also delighted to have Peter Bolland performing for us the 2nd Music on the Mountain

performance for this month. Bolland has been playing music and writing songs his entire life. His solo album was called Frame, released in 2002. It earned a Best Americana Album nomination at the San Diego Music Awards. Then be coordinated a band called The Coyote Problem from 2002-2010. This band won the Best Americana Album prize for both of albums, Wire in 2005 and California in 2007 at the San Diego Music Awards. Boland left that band to focus on his solo work. His new album Two Pines was released a couple of months ago. He just learned last week that Two Pines was nominated for best Americana Solo Album

in San Diego Bolland is also a session musician playing a wide variety of instruments on other people's albums, things like acoustic and electric guitar, lap steel guitar, Dobro, mandolin, banjo, and harmonica. Bolland does not perform as much publicly during the school year as he also has a day job. He is a full-time professor at Southwestern College, teaching philosophy and religion courses, in addition to being the chair of the Humanities department for Southwestern College. I believe you will find that he is a remarkable songwriter and

Celebrating from concept to completion, the Julian Branch Library was a true community project, 10 years later it has evolved into the Community Center many had envisioned