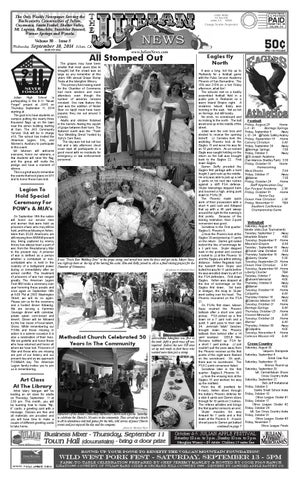 Julian High School is participating in the 9-11 “Never Forget” project at JUHS on Thursday September 11, 2014 starting at . The goal is to have students on campus putting the nearly three thousand flags up on the lawn near the annex building starting at 5am. The JHS Community Service Club will be in charge of it. The school has invited the American Legion, SAL, and Women’s Auxiliary to participate in this event. Mr. Munson will welcome everyone, honor our veterans, a few students will raise the flag, and the group will recite the pledge and have a moment of silence. This is a great way to remember the events that took place on 9/11 and to honor those lives lost.

The grapes may have been smaller that most years (due to draught) but the crowd was as large as any remember at this years 18th annual Grape Stomp Festa at the Menghini Winery. The primary fund raising event for the Chamber of Commerce had more vendors and more attendees even though the number of wineries remains constant. One new feature this year was the addition of Nickel Beer on tap(it must have been popular, they ran out around 3 o’clock). Adults and children frolicked in the barrels, feeling the squish of grape between their toes. The featured event was the “Trash Your Wedding Dress” hosted by KyXy’s Sam Bass. The day was hot but not too hot and a late afternoon cloud cover kept all participants in a good mood with no incidents for emergency or law enforcement personnel.

Legion To Hold Special Ceremony For POW’s & MIA’s On September 19th the nation will honor our service men and women that were held as prisoners of war, who may still be held, and those Missing in Action. More then 83,00 Americans are still missing from WWII till present day. Being captured by enemy forces has always been a part of war, from the Revolutionary War to the present day. A prisoner of war is defined as a person whether a combatant or noncombatant who is held in the custody of a belligerent power during or immediately after an armed conflict. The treatment of prisoners of war has ranged greatly. The American Legion Post 468 holds a ceremony ever year honoring these people and once again on September 19th at 6:00 PM at 2503 Washington Street, we will do so again. Please join us for the ceremony and a hosted dinner following. We are serving a Kammen Sausage dinner with coleslaw, potato salad, corn-bread and desert. Dinner will be followed by the live music of local talent, Grass. While remembering our POWs and those missing in action is a solemn occasion it is also a celebration of their lives. We are grateful and honor those who have returned and honor all whom we have lost. Prisoners of War and those who are missing are part of our history and our present day and as we approach POW/MIA day The American Legion family invites you to join us in remembering.

It was “Trash Your Wedding Dree” at the grape stomp, and turned into stain the dress and get sticky, Mayor Stacy, was right up there at the top of the having fun scale, Kim and Kelly joined in, all as a fund raising project for the Chamber of Commerce. all photos by Michael Hart

(above)Mike Menghini was first in the tank. (left) a good rinse off was required. (below) the new VIP area set up and ready to feed those who wanted more than just a stomp.

Art Class At The Library

Artist Mary Morgan will be leading an art class for adults on Thursday, September 11 at 2:30 pm. This month, you will be learning how to make “flipit” cards, a greeting card with a message. Classes are free and all materials are provided and you will have time to make a couple of different greeting cards to take home.

Memebers of the Julian Community Methodist Church held a picnic Saturday to celebrate the Church’s 50 years in the community. They served up a lunch to all in attendance and had games for the kids, told stories of paast Church events and just enjoyed the day and the company. photo by Michael Hart

It was a long, hot trip up to Redlands for a football game with the Pubic Service Academy Phoenix of San Bernardino. The 15N and 215N on a hot Friday afternoon, what fun! The schools met on a hastily assembled football field in a public park in Redlands on a warm Inland Empire night. A snowless Mount Baldy was looming in the east. Not as hot as Borrego, but still toasty. No clock, no scoreboard and no kicking to the north. The ball would end up in the middle of the street. Julian won the coin toss and elected to receive the opening kickoff. JJ Corrales took the wobbling Phoenix kick at the Eagles 15 and wove his way for an 18 yard return. An un-named Eagle was caught holding on the return so the ball was brought back to the Eagles 22. First down Eagles. Darren Duffy provided the Eagles first yardage with a hard fought 3 yard rush up the middle. He only was able to pick up a net 2 yards on his next two rushes against a stiff PSA defense. Skyler Marushige stepped back and boomed a high, arcing punt down to PSA’s 28. The Phoenix made quick work of their possession with a short 4 yard rush and followed that up with a 48 yard sweep around the right for the evening’s first points. Because of the kicking restriction, their 2-point conversion was good. Sometime in the First quarter: Eagles 0, Phoenix 8. JJ took the Phoenix kick at the Eagles’ 20 and picked up 11 yards on the return. Darren got nailed behind the line of scrimmage for a 3 yard loss. Skyler stepped back in the pocket and zoomed a rocket to JJ at the Phoenix 19 and the Eagles are within striking distance. Kellen Regalado took the handoff from Skyler and bulled his way for 11 yards before his was wrestled down by all 8 of the PSA defenders. First down Eagles. Kellen was stopped at the line of scrimmage on the Eagles first down. Set back in shotgun, the snap to Skyler went sailing over his head. The Phoenix recovered on the PSA 21. On PSA’s first down, Mason Baay crushed the Phoenix tailback after a short one yard pickup. PSA picked up a first down on a 7 yard rush and a quick 5 yard pass to their own 34. Jeremiah “Miah” Sanchez brought down the Phoenix tailback from behind after a 14 yard scamper. DE/LB Nino Romano bottled up PSA for a short 1 yard pickup. JJ just couldn’t pull the pass away from the Phoenix receiver as the first points of the night were flashed on the scoreboard. Oh yeah, there was no scoreboard. The PSA 2 point conversion failed. Sometime later in the first quarter: Eagles 0, Phoenix 14. JJ took the ensuing kick at the Eagles 15 and worked his way up the midfield. From the 40 (midfield for 8-man), Kellen slices through the buttery Phoenix defense for a slick 9 yards and Darren slices through for 10 yards on 2 rushes. The referee whistles and brings the first quarter comes to an end. Skyler muscles his way forward for 7 yards and a first down at the Phoenix 8. A quick shovel pass to Darren got batted continued on page 7