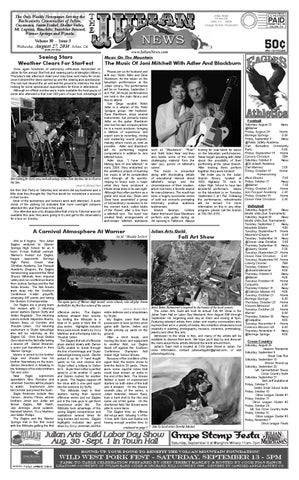 Seeing Stars Weather Clears For StarFest Once again hundreds of astronomy enthusiast descended on Julian for the annual StarFest and viewing party at Menghini Winery. Thursday’s late afternoon down pour may have sent many for cover, once it cleared the skies opened up and the viewing was spectacular. The rain had cleared the air and wet the ground to minimize the dust making for some spectacular opportunities for those in attendance. Although no official number were made available the best guess of some who attended is that over 300 pairs of eyes took advantage of

Not waiting for dark some took advantage of the clear daytime sky to observe the Sun.

the free Star Party on Saturday and vendors did say business was a little slow they thought the StarFest would be considered a success in their books. Most of the workshops and lectures were well attended. A quick check of the parking lot indicated that more overnight campers attended this year than have in the past. One attendee was only disappointed that a trip to Palomar was not available this year, they were going to try and get to the observatory for a tour on Sunday.

The Music Of Joni Mitchell With Adler And Blackburn Please join us for husband and wife duo, Robin Adler and Dave Blackburn, for the Music on the Mountain performance at the Julian Library. The performance will be on Tuesday, September 2 at 6 PM. All music performances are held in the main library and free to attend. San Diego vocalist Robin Adler is a veteran of the Peter Sprague group. Her husband, Dave Blackburn, plays several instruments, but primarily backs Adler on the guitar. Blackburn also has his own company where he is a music producer, bringing a lifetime of experience and expert ears to recording, mixing and mastering sound projects, making others music as vivid as possible. Adler and Blackburn will be performing original compositions in addition to Joni Mitchell tunes. Adler says, “I have been lifelong fans of Joni Mitchell.” In early 2006, they embarked on the ambitious project of learning her music in all its complexities and through all its epochs. Hoping to honor such a major artist they have produced a tribute show deep in its own right. Although they often perform as a guitar and vocal duo, Robin and Dave have assembled a group of extraordinary musicians to be the concert band, called Mutts of the Planet, after a line from a Mitchell lyric. The band has created fresh arrangements of well-known Mitchell standards

such as “Woodstock”, “River” and “Both Sides Now” and they also tackle some of the most challenging material from the later jazz period of Mitchell’s career. The music is presented along with illuminating details of educational interest about Mitchell’s songs and the circumstances of their creation, which has been a favorite aspect for many listeners. The result has been a hugely successful series of sold out concerts prompting extremely positive audience testimonials. Branch librarian, Colleen Baker first heard Dave Blackburn perform solo guitar during an Art opening in Fallbrook. Always

The opem spces of Warner High hosted seven schools, who all play 8-man football for the first live action of the season.

entire defense and a smackdown by Skyler. My Eagles used their final possession to tune up their short game with Darren, Kellen and Skyler picking up yards on the ground. After a short break, and moving the team and equipment to another field, our Eagles faced off against the Southern Conference Champion Noli Indian High School Braves. Because of the condition of the upper field, the teams chose to limit the field to 20 yards. There were some squirrel holes that could have broken an ankle in the end of the field. The Braves fielded a team of experienced starters on both sides of the ball and it showed. On the Braves’ seventh play of the series, a Julian defender, Mason Baay, took a hard shot to the ribs and came out of the game. On the shortened field, the Braves were able to score twice. The Eagles time on offense did not go well. Missing ¼ of the O-line, with Chris and Bubba not having enough practice time to continued on page 7

looking for new talent for Music on the Mountain performances, Baker began speaking with Adler about the possibility of their performing at the Julian Branch. After hearing them perform together, they were booked! We invite you to the Julian Branch library, located at 1850 Highway 78, next to Julian High School to hear two wonderful performers. Music on the Mountain is on Tuesday, September 2, at 1 PM. Following the performance, refreshments will be served. For more information on this or any other program, please call the branch at 760-765-0370.

offensive series. The Eagles defense showed their resolve by limiting the Wildcats to a total of 10 yards in their first 10 play series. Highlights included three pass knock downs by Ozzy Martinez and a thumping sack by Shuuluk Linton. The Eagles first set of offensive plays started slowly with Darren Duffy unable to break through the line of scrimmage and Skyler Marushige tossing a pick. Darren picked it up for 11 hard fought yards on his next chance and Skyler lofted a lollipop to Kellen for 8. Skyler then lofted a perfect spiral to JJ for another 11 yards and Darren rushed for another 9 yards. The Eagles capped off the drive with a one-yard squirt into the endzone by Duffy. The Wildcats kept in their starters during their second offensive series and our Eagles put in the new guys to get them experience under fire. The Wildcats took advantage of the young Eagles inexperience and capitalized several times for long bombs and scores. Eagles highlights included two good stops by Ozzy, Jeremiah and the

www.JulianNews.com Music On The Mountain

A Carnival Atmosphere At Warner And so it begins. Your Julian Eagles ventured to Warner Springs High School for an 8 team, 8-man football carnival. Warner’s hosted our Eagles, league opponents Borrego High Rams, Ocean View Christian Academy, San Pasqual Academy Dragons, the Eagles Homecoming opponent the West Shores Wildcats from Imperial Valley and non conference teams from Joshua Springs and the Noli Indian Braves. The Noli Braves went deep into the Southern Conference 8-Man playoffs, amassing 447 points and taking the Division II championship. Our Eagles are a young team this season with 2 returning senior starters Darren Duffy and Kellen Regalado. The returning juniors include Alejandra Abarca, Mason Baay, JJ Corrales and Shuuluk Linton. Our returning sophomore is Skyler Marushige who will be returning as the Eagles QB. Chris Boyd, Bubba Duro return to the field after taking a season off. Daniel Streamer, a junior just transferred in from Warner Springs. Mason is joined by his brother Gage and Shuuluk has his brother Nyemetaay on the team. Dennis Beresford is following in the footsteps of his older brothers Tah and John. New Eagle sophomore speedsters Nino Romano and Jeremiah Sanchez will be players to watch. Sophomore John McCormick just joined the team. Eagle freshmen include Alex Carson, Jeremy Flores, whose brothers Jesse and Justin are former Eagles, Will Hatch, Jojo Jennings, Jesse Ludwick, Marshall Marriot, Ozzy Martinez and Eddie Phillips. The Eagles and the Warner Springs met in the first round with the Wildcats getting the first

Artist Bettie Rickansrud is inspired by the beauty of the local scenery. The Julian Arts Guild will host its annual Fall Art Show in the Julian Town Hall on Labor Day Weekend, from August 30th through September 1st, beginning each day at 10am and closing at 6pm. Featuring talented artists from Julian and nearby communities who express their art in a variety of media, this exhibition showcases local creativity in painting, photography, mosaics, ceramics, printmaking, jewelry and other fine arts. Admission to the show is free, and many of the artists will be available to discuss their work. We hope you'll stop by and discover the many ways these artists interpret the world around them. Julian's Town Hall is located at 2129 Main Street in Julian. For more information, contact julianartsguild@gmail.com, or visit julianartsguild.org.