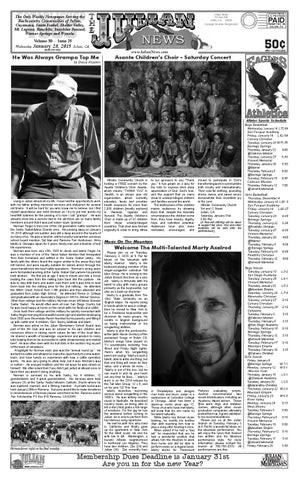 He Was Always Grampa Top Me

Living in Julian almost all my life, I have had the opportunity to work with my father writing memorial services and obituaries for several old timers. It will be hard for you who know me to believe, but I find myself speechless and mind blocked as I try to put into words my heartfelt sadness for the passing of a man I call “grampa”. He was actually more like a second dad to me yet there are so many family members around that it was just easier sayin “grampa”. Norman Feigel is truly one of the old generation cattle ranchers in the Santa Ysabel/Mesa Grande area. His passing away on January 18, 2015 although not sudden, was still a deep wound in the hearts of so many of us. He was a rancher, retired county road worker, previous school board member, Del Mar and Ramona Fair Auctioneer, Army Medic in Okinawa Japan for 3 years, family man and a teacher of real life experiences. Norman was born July 12th, 1935 to Jacob and Maria Feigel, he was a member of one of the Swiss Italian families that immigrated from their homeland and settled in the Santa Ysabel Valley. His family with the others found the region similar to the areas they had left behind, and were equally suitable for dairies which through the years transitioned into beef cattle operations. Norman’s young years were formulated working at the Santa Ysabel Dairy where his parents both worked. His first job at age 5 was to mount and ride a horse leading the cows from the milking barn back into the pasture. He was to stay with them and watch over them until it was time to lead them back into the milking area for the 2nd milking. He attended the Witch Creek School from 1-8th grades and then attended and graduated from Julian High School. He attended Pierce Jr. College and graduated with an Associate’s Degree in 1953 in Animal Science. Other than college and the military Norman never left Mesa Grande/ Santa Ysabel. He would often work all over San Diego County, but he was most happy at home on the ranch with his family and cattle. Once back from college and the military he quickly connected with Kathy Angel marrying this beautiful country girl and started developing their 2000 acre Bloomdale Ranch founded by his parents, and filling it up with cattle and 4 children, Dori, Becky, Mathew and Mark. Norman was active on the Julian Elementary School Board, was part of the 4H Club and was an advisor to his own children and numerous others in raising ranch calves for two of the local fairs. He shared a wealth of knowledge, experience and wisdom to many kids helping them to be successful in cattle showmanship and market beef. He was often seen with his bull stick in the auction ring as part of the team of volunteers. A highlight for Norman each year was the “annual round up”. He worked his cattle and allowed so many the opportunity to come watch, learn, and have hands on experience with how a cattle operation works. He was very giving to allow help, but it was Norman’s way or nothin~ He enjoyed tradition and the old ways he was raised on himself. We often joked that if you didn’t get yelled at atleast once or twice then you weren’t doing anything. Norman is survived by his wife Kathy, his 4 children, 12 grandchildren and 4 great grandchildren. His services were held January 24, at the Santa Ysabel Mission Catholic Church where he was baptized, married, and a lifelong member. A private burial was held January 26th in Ramona. If anyone would like to make donations in remembrance of Norman please send them to the Ramona Junior Fair Scholarship PO Box 618 Ramona, CA 92065.

Norman(lower right) at the final roundup

Hillside Community Church is hosting a FREE concert by the Asante Children’s Choir. Asante, which means “THANK YOU” in Swahili, is an eleven year old organization, which currently educates, feeds and provides health insurance for more than 2,000 children [mostly orphans] in Rwanda, Uganda and Burundi. The Asante Children’s Choir is made up of 22 children from these underprivileged countries. That choir was formed originally in order to bring Africa

to our sponsors to say “Thank you.” It has grown as a way for the kids to express their deep appreciation of God, God’s love, and the support that so many show to underprivileged children and families around the world. The testimonies of the children inspire audiences by showing them that, despite the desolate circumstances the children come from, they have beauty, dignity, hope and unlimited potential. Audiences have also been motivated, encouraged, and

moved to participate in God’s transforming work in communities both locally and internationally. Their colorful clothing, pounding drums, dance, and sweet voices demonstrate their incredible joy in the Lord. Hillside Community Church 3rd and C Street Julian, CA Saturday, January 31st 5:00 PM [A free-will offering will be taken to support the choir. CDs and other materials will be sold after the performance.]

Welcome The Multi-Talented Marty Axelrod Please join us on Tuesday, February 3, 2015 at 6 PM for Music on the Mountain with Marty Axelrod. Marty is the keyboard-playing member of the singer-songwriter collective Tall Men Group. He is coming to the Julian Branch this time as a solo act. Marty is fortunate with his talent to play with many groups primarily as the keyboardist, but also as a back-up drummer. Marty is a graduate from The Ohio State University as an English Major. He reports being in bands while he was in college, then he moved to New York to be a Freelance keyboardist and drummer for many groups. He credits is English background as being instrumental in his songwriting abilities. Marty is also the producer/cowriter (with Nicole Gordon) of the acclaimed Songs of Shiloh CD. Marty’s songs have played on TV soundtracks including True Blood and Friday Night Lights. Here’s what his songwriting peers are saying: “Marty is such a talent, able to write one thing, but that one thing will mean its face value, and a whole lot more…”; “Marty is out of the box, but he can reach in and rip your heart out any time he likes…”. Marty’s work is on the 2014 release by the Tall Men Group, 12 x 6, and on his solo CD This Year. Marty describes becoming serious about songwriting in the 1990’s. He was writing country music in Nashville. He described country music as being able to tell a story that grabs a full range of emotions. For the gig he has the weekend before coming to Julian, he is only to perform from his hilarious song repertoire. He met his wife Kim, who lived in California and finally gave up his apartment in New York for the West coast. He and his wife live in Mt. Washington, a bucolic hillside neighborhood in northeast Los Angeles. They have two children, Zoe (24) and Julian (19). Zoe currently lives

in Philadelphia and designs river trails and tours. Julian is a sophomore at Colombia College in Chicago. Julian has been a stand-up comic since age 12. Those of us who have met Marty, will know that his son came by his talent naturally. While Marty has formal music training, he credits his brother Alan with teaching him how to play a song after hearing it once. When asked if he had a “day job” he responded that yes he had a wonderful position that allows him the freedom to work from home and still be able to perform music on a regular basis. Marty works for Paramount

Pictures evaluating scripts. Axelrod recommended two recent blockbusters, including an Academy Award winner. These films were Argo and Imitation Games, although other movie production companies ultimately picked them up, it gives validation to his recommendations. Please join us at the Julian Branch on Tuesday, February 3 at 6 PM for a wonderful Music on the Mountain performance. You will enjoy the lyrics that Axelrod has written and his fabulous performance style. For more information, please contact the branch at 760-765-0370. All performances are free.

Membership Dues Deadline is January 31st Are you in for the new Year?