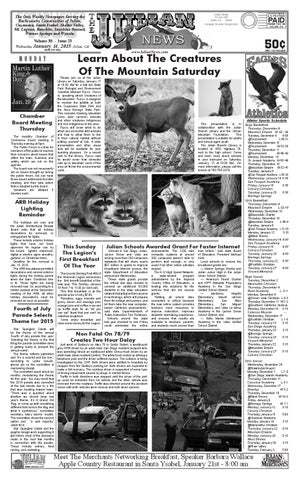 Learn About The Creatures Of The Mountain Saturday

Chamber Board Meeting Thursday The monthly Chamber of Commerce board meeting is Thursday evening at 6pm. The Public Forum is a time for members of the public to express their concerns about issues that affect the town, business and safety, which are not on the agenda. The board can not necessarily act on issues brought up during the public forum, but can have those issues addressed at a later meeting, and then take action that is adopted by the board. Speakers are allowed 3 minutes each.

This presentation is in collaboration with the Julian Branch Library and the Volcan Mountain Foundation. This presentation is suitable for adults and school-aged youth. The Julian Branch Library is located at 1850 Highway 78, next to the high school. Come and learn more about animals in your backyard on Saturday, January 17, at 10:30 AM. For more information, please call the branch at 760-765-0370.

ARB Holiday Lighting Reminder The holidays are over and the Julian Architectural Review Board asks that all holiday decorations be removed, or extinguished for lights. These include exterior holiday lights that have not been approved for regular use by the board: lighted, motorized, digital or electric signs, wreaths, garland, or Christmas trees, Deadline for the removal is Jan. 15, 2015. The ARB has always permitted decorations and colored exterior lights during the holiday period when the town Christmas tree is lit. Those lights are being removed now. So, according to a motion passed at the December meeting of the ARB, all other holiday decorations must be removed as soon as possible.

This Sunday The Legion’s First Breakfast Of The Year The Lincoln Deming Post 468 of the American Legion announces the first benefit breakfast of the new year. This Sunday, January 18 from 7 to 11:30 (or sold out). This first breakfast is at the special price of only $7.00. Pancakes, eggs, biscuits and gravy, bacon and sausage plus orange juice and coffee is served up buffet style for an “all you can eat” feast that just can’t be matched anywhere. Come enjoy breakfast and raise some money for the Legion.

Fourth of July Parade Selects Theme for 2015 Star Spangled Salute will be the theme of the annual Fourth of July parade this year. Selecting the theme is the first thing the parade committee does in getting ready to present the annual event. The theme reflects patriotism and “it’s a colorful and fun one,” according to Leslie Crouch, whose job on the committee is overseeing design. The committee spent about six months considering the theme for this year. You may recall that the 2014 parade was cancelled at the last minute due to a fire that was heading toward town. “There was a question about whether we should keep last year’s theme, It’s A Grand Old Flag, or come up with something different that honors the flag and what it symbolizes,” committee secretary Mary Morris recalls. The committee chose the second option and “a vast majority” voted for it. Star Spangled Salute and the graphic design work supporting it will inform most of the decisions made in the next few months in connection with the parade. These include entries, fund raising, and marketing.

Schools in San Diego, Julian, Lemon Grove and Vista are among more than 200 campuses statewide that will share nearly $27 million in grants to improve broadband Internet access, the state Department of Education announced Wednesday. “These state grants provide the critical last step needed to connect an additional 63,000 students to the state education network that will give them access to technology, which will prepare them for college and careers, and let them take the new computerbased California assessments,” said state Superintendent of Public Instruction Tom Torlakson. Schools around the state last year checked to see if they could administer the online

Just west of Dudley's on Hwy 78 in Santa Ysabel, a westbound grey HHR driven by an adult male San Diego resident (suspect who was speeding) struck an eastbound white Chevy truck driven by an adult male Julian resident (victim). The white truck ended up striking a telephone pole and the driver suffered injuries. The collision is being investigated by the CHP. Both drivers were airlifted to hospitals by chopper from the Dudley's parking lot. Both drivers are expected to make a full recovery. The reckless driver is suspected of some type of driving impairment caused by drugs or mental illness. Traffic in both directions was stopped until the driver of the pick up could be extracted from his vehicle and the other vehicle was removed from the roadway. Traffic was directed around the accident scene until both vehicles were remove and both lanes opened.

assessments. The CDE said computer systems at around 300 campuses weren’t able to perform well enough, or only could if all other online activities ceased. The K-12 High Speed Network, a state-funded program administered by the Imperial County Office of Education, is looking into solutions for the schools that did not receive grants. “Getting all school sites connected is critical because the new online system provides teachers more resources to improve instruction, improves students’ test-taking experience, and ensures that results are available to teachers, parents, and students much sooner than

Please join us at the Julian Library on Saturday, January 17 at 10:30 AM for a talk led State Park Biologist and Environment Scientist, Michael Puzzo. Puzzo is speaking about Creatures of the Mountain. Puzzo is assigned to monitor the wildlife at both the Cuyamaca State Park and the Anza Borrego State Park. This includes tracking Mountain Lions, deer, raccoon, bobcats and other creatures indigenous and non-indigenous to the area. Puzzo will cover what to do when you encounter wild animals and how to allow them to live in their natural habitat without putting yourself at risk. A slide presentation and other visual aids will be available for your learning pleasure. On a recent visit to the library, Puzzo said he would cover how domestic cats up to Mountain Lions of the area all fit into the environmental cycle.