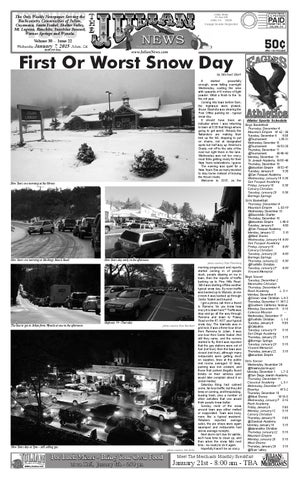 It started peacefully enough, snow falling overnight Wednesday, coating the area with upwards of 9 inches of light powder. What a finish to the to the old year. Coming into town before 6am, the highways were plowed, Bruce Stachota was clearing the Post Office parking lot - typical snow day. It should have been an indicator when I was returning to town at 8:30 that things where going to get weird. Already the flatlanders are making their trek up the hill, stopping to put on chains, not at designated spots but half way up America’s Grade, not off to the side of the road but right there in the lane. Wednesday was not too crazy, most folks getting ready for their New Years celebrations, I guess The evening was quiet for a New Years Eve as many decided to stay home instead of braving the frozen roads. Welcome to 2015, as the

morning progressed and reports started coming in of people stuck, people slipping on ice in town, then the reports of traffic backing up to Pine Hills Road. Still it was starting off like another typical snow day. By noon traffic was backed up to Wynola, at one o’clock it was backed up through Santa Ysabel and beyond. I got a phone call from a friend in Ramona “do you know how crazy it is down here?” Traffic was stop-and-go all the way through Ramona and down to Poway Road on the 67. NOT your typical snow day. The townsite was in grid lock, it was a three hour drive from Ramona to Julian. It was one hour from Santa Ysabel. And still they came, and the rumors started to fly, first it was reported that the gas stations were out of fuel (not true), then the town was closed (not true), although many restaurants were getting short on supplies, lines at the public rest rooms averaged 10 deep, parking was non existent, and those that parked illegally found tickets on their vehicles (and would later complain about it on social media). Saturday thing had calmed some, far less traffic, but they did keep on coming, and trespassing, leaving trash, plus a number of other activities that one would think people knew better. Sunday, most of the snow around town was either melted or evaporated. Town was busy, more like a typical weekend. Retailers reported average sales, the pie shops were again swamped and restaurants had above average receipts. Next storm isn’t due for awhile, we’ll have time to clean up, and then when the snow falls next time - be ready to do it again. Hopefully it won’t be as crazy.