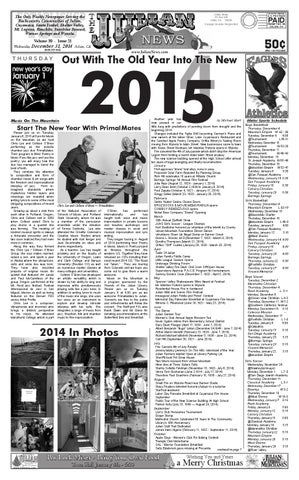 Out With The Old Year Into The New

Start The New Year With PrimalMates

Please join us on Tuesday, January 6, 2015 at 6 pm for Music on the Mountain as we host Chris Lee and Colleen O'Brien performing as the eclectic chamber jazz duo PrimalMates. Their program is titled Poetry in Music If you like jazz and you like poetry, you will enjoy how this duo has managed to blend the best of both. They combine the attention to composition and form of chamber music & art songs with the freedom and improvisational interplay of jazz. From reimagined standards where mysterious hidden layers and meanings are revealed when writing lyrics to some of the most intriguing compositions of recent years. Growing up about a mile from each other in Portland, Oregon, Chris and Colleen met in 1980 when Colleen asked Chris to play drums in a quartet she was forming. The meeting of kindred musical spirits is always a fortunate encounter and the two soon realized they had even more in common. Along the way they formed the Chris Lee / Colleen O'Brien Group, the soul mates married, raised a son, and spent a year in Alaska where the vibraphone, cello and voice duo was born. They have also recorded projects of original music for quintet that featured Art Lande and Paul McCandless of the group Oregon, performed at the Mt. Hood jazz festival, Festival Internacional de Jazz in San Miguel, Mexico as well as being featured on the Denver PBS series Artist Profile. Chris Lee is a composer, vibraphonist and drummer who brings a distinct perspective to his music. He attended Marylhurst College, which is part

Chris Lee and Colleen O'Brien — PrimalMates of the National Association of Schools of Music, and Portland State University, where he was a member of the percussion ensemble under the direction of Tomas Svoboda. Lee also attended the Ornette Coleman’s Creative Music Studios where he studied with Karl Berger and Jack DeJohnette on vibes and drums respectively. As a teacher, Lee has taught privately and on the faculty of the University of Oregon, Lewis and Clark College, and Naropa University (Boulder CO) as well as numerous master classes at many colleges and universities. Colleen O’Brien has developed an artistic versatility, which is shown by her ability to sing and improvise while simultaneously playing cello like a jazz bass. In addition to writing lyrics to much of the music she sings, she uses her voice as an instrument to explore and develop intricate interplay with her cello. She integrates a range of music from jazz, Brazilian, folk and chamber music to free improvisation.

O’Brien has performed internationally and has taught both voice and music improvisation in private lessons and teaches workshops and master classes in vocal and musical improvisation and lyric writing. They began touring in August of 2014 performing their Poetry in Music, Music in Poetry project at libraries throughout the western US. Together they have released six CD’s including their most recent 2014 CD, “The Road not Taken.” They are touring from Colorado and we hope you come out to give them a warm welcome. Music on the Mountain is a program sponsored by the Friends of the Julian Library. Please join us on Tuesday January 6 at 6:00 pm as we welcome PrimalMates to Julian. Concerts are free to the public and refreshments will follow the concert. The Staff and FOL also thank Dawn and Ed Glass for donating accommodations at the Butterfield Bed and Breakfast.

Wishing You and Yours