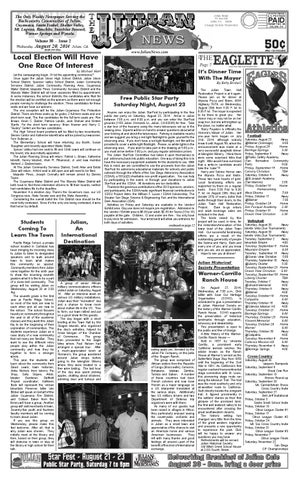 It’s Dinner Time With The Mayor

Let the campaigning begin. Or let the appointing commence? Once again the Julian Union High School District, Julian Union School District, Spencer Valley School District, Julian Community Services District, Julian Community Planning Area, Cuyamaca Water District, Majestic Pines Community Services District and the Wynola Water District will all have vacancies filled by appointment. In some instances, the school districts, the candidates who filed for the election will be certified as the winners as there were not enough people running to challenge the election. Three candidates for three seats and we have our winners. The one exception will be the Julian-Cuyamaca Fire Protection District. There are three seats up for grabs, 2 full term seats and one short term seat. The five candidates for the full term seats are: Ron Brown, Kevin C. Dubler, Patricia Landis, Jack Shelver and Kirsten Starlin. For the short term vacancy: Brian Kramer and Harry C. “Buddy” Seifert are the two candidates. The High School board positions will be filled by two incumbents; Dennis Cantor and Katherine Moretti who will be joined by newcomer, Tom Skibinski Jr. The Elementary School will have returning Joy Booth, Susan Slaughter and recently appointed Wade Wylie. Specer Valley had one seat to fill and Cristi Lewis will continue on the board, she was initially appointed. The Julian Planning Group will return: Patrick L. Brown, Katherine Moretti, Kenny Mushet, Alvin R. Rikansrud, Jr. and new member Herbert J. Dackermann. At The Julian Community Services District, Scott Arter and Bobbi Zane will return. A third seat is still open and will need to be filed. Majestic Pines, Joseph Connally will remain joined by Dennis Taylor. The Cuyamaca Water District and The Wynola Water District will both have to find three interested citizens to fill their boards, neither had candidates file by the deadline. November 4 is election day. There’s the Governors race, our US Congress race, State Senate race and the State Assembly. Considering the overall ballot the Fire District race should be the most hotly contested. Since it’s the only one being contested, it wins that honor by default.

Students Coming To Learn The Town Pacific Ridge School, a private school located in Carlsbad has been bringing its incoming class to Julian to listen to designated speakers and to walk around town to learn what makes this community so special. Community members from Julian come together for the sixth year to show the incoming seventh graders what it is like to be a part of a close-knit community. This group will be visiting Julian on Wednesday, August 20 at 3:30 PM. The seventh grade is the first year at Pacific Ridge School, so most of the kids are new to each other and all are new to the school. The school focuses heavily on community throughout the year in all of the academic classes and they want this Julian trip to be the beginning of their exploration of communities. The students experience Julian as a case study of a new community that not many are familiar. They want to see the different roles people play within the Julian community and how they tie together to form a stronger whole. This year, the students will learn about the community from David Lewis, town historian; Anita Nichols from Mom’s Pie Shop, Sally Snipes, Artist, Master Gardener, Daffodil Project coordinator; Kathleen Beck will represent the Volcan Mountain Preserve; Mike Van Bibber will speak on behalf of the Julian Cuyamaca Fire District, and Colleen Baker from the library will have a group. Another group will visit merchants in town, Seventy-five youth and fourteen faculty members will be coming to learn about Julian. If you see this group on Wednesday, please make this feel welcome. After all, that is why Julian was chosen. They initially meet at the library and then, based on their group, they will disburse in town or stay at the library or high school for their talk.

Local Election Will Have One Race Of Interest

Free Public Star Party Saturday Night, August 23 Anyone can enjoy the Julian StarFest by participating in the free public star party on Saturday, August 23, 2014. Arrive in Julian between 7:00 p.m. and 9:00 p.m. and you can enter the StarFest grounds (1150 Julian Orchards Ln, Julian, CA 92036) for free. Take a star tour of the heavens using the many telescopes set up in the viewing area. Experts will be on hand to answer questions about what your looking at and about the telescopes. Parking is available nearby and we suggest you bring a red light flashlight to guide yourself to the observing area. If you don't have a red light flashlight, red film will be provided to cover a white light flashlight. Please, no white lights in the observing area. If you wish to take part in the drawing at 5:00 p.m., you must arrive before 5:00 p.m. and pay regular admission prices. The Julian StarFest Committee has taken it upon themselves to put astronomy back into public education. One way of doing this is to have the necessary equipment available for the students to use. With this in mind, we are committed to use the proceeds from the Julian StarFest for astronomy educational materials for schools and public outreach through the efforts of the San Diego Astronomy Association (SDAA), a 501(c)(3) charitable non-profit organization. You can help by participating in the event, or through your donations to Julian StarFest and the SDAA. All donations are tax deductible. Thanks to the generous contributions of the 2013 sponsors, vendors, and participants, the SDAA made significant financial contributions to SDSU Project Astro, the William F. Lucas / SDAA Scholorship, The Greater San Diego Science & Engineering Fair, and the International Dark Association (IDA). Activities on Friday and Saturday are available in the Vendor/ Exhibit area. Day use does not require pre-registration. Admission to the Vendor / Exhibit area is $5.00 per adult, $2.50 for Teens (13 to 18) payable at the gate. Children, 12 and under are free. You only have to pay once for admission. Your wrist band will allow you entrance for both days of activities. continued on page 12

The Julian Town Hall Restoration Project is at it again. Please join us for dinner at Wynola Pizza and Bistro, 4355 Highway 78/79, on Wednesday, August 20th from 5:30 P. M. to 8:30 P. M. The mayor is expected to be there to greet you. Her Honor may or may not be on her soap box, but she will brighten up the place, no matter what. Stacy Peyakov is officially the Honorary Mayor of Julian. Her one-year term began on July 31st, 2014, although nobody knew it until August 7th, when the announcement was made at a very successful spaghetti dinner at Menghini Winery. I think there were some surprised folks that night. Who would have surmised that a write-in candidate would take the “cake”?! Harry and Sebina Horner own the Wynola Pizza and Bistro. These two have hearts of gold. Local fundraising efforts are supported by them on a regular basis. From 5:30 P.M. to 8:30 P. M. on August 20th, they will donate 25% of every dollar that walks through their doors, to the Julian Town Hall Restoration Project. Even to-go orders and adult beverage sales are included in the deal. The funds raised by this project will be used, in time, for the restoration/renovation of the lower level of the Julian Town Hall. Our successful fundraising efforts are a result of the outstanding generosity of people like Sebina and Harry. Each and every one of you, and you know who you are, are so appreciated. Hope to see you at dinner!

A group of senior African military communications officers visited Julian on Saturday, August 16. After an intensive week on various US military installations, Julian was their “recreation” day and a chance to know more about civilian life in the US. True to form, our town rallied and put on a good show for the guests. The day began with a short briefing at the Town Hall by Kiki Skagen Munshi, who organized the day’s activities, helped by Krisie Morgan of the Chamber of Commerce. The group then proceeded to the Eagle Mine where Paul Nelson had arranged a special tour. After a much-appreciated lunch at Romano’s, the group wandered around Julian shops before going to the Menghini Winery where they were treated to a free wine tasting. The last hour of the day was spent picking apples, chatting about chickens, admiring deer and turkeys and

eating apple pie, donated by the Julian Pie Company, on the patio of the Skagen Ranch. The group was comprised of African visitors from the Republic of Congo (Brazzaville), Comoros, Botswana, Malawi, Zambia, Tunisia and Gabon. A number of these countries had been French colonies and now have French as a major language so a US interpreter translated at the various stops. Additionally two US military drivers and two Department of Defense trip organizers were with them. As many of our guests had been raised in villages in Africa, they particularly enjoyed seeing the countryside, orchards and animals. They were interested in Julian as a small town and appreciative of the chance to visit an American home and various American businesses. They left with many thanks and good feelings all around—part of the benefit of this kind of international exchange.

On August 27, 2014, Wednesday, at 7:00 p.m., Dick Miller with Save Our Heritage Organisation (SOHO), is scheduled to give a presentation at Julian Historical Society on the history of the Warner-Carrillo Ranch House. SOHO supports the preservation of historical landmarks through education, advocacy and stewardship. This presentation is open to the public and free of charge. A little History of the WarnerCarrillo Ranch House — Built in 1857 by Vincenta Carrillo, a prominent early Californio woman rancher, the adobe known as the Ranch House at Warner's served as the Butterfield Stage Stop from 1858 until the beginning of the Civil War in 1861. As California's first regular overland transcontinental stage connection with St. Louis, this pioneering stage route ran along the Missouri Trail. The trail was the most southerly and only all-weather route to California. Built directly beside the emigrant trail, it figured prominently in the settlers' diaries as their first glimpse of the promised land, the first well watered valley to be encountered after crossing the great southwestern deserts. The historic setting has changed very little from the time of the great western migration and presents a rare opportunity to experience the past. Dick will be happy to answer any questions you may have. Refreshments will be served. Julian Historical Society Old Witch Creek School House at 2133 Fourth Street.