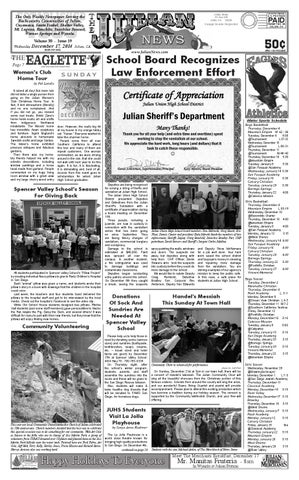 It rained all day! But mere rain did not deter a single person from going on the Julian Woman’s Club Christmas Home Tour. In fact, it lent atmosphere (literally) and no one complained. And if you did not go, you missed some real treats. Bobbi Zane’s home holds exotic art and crafts from indigenous Northwest inhabitants. The Woods’ home has incredible Asian sculptures and furniture. Ingrid Englund’s home abounds in homemade Swedish crafts and large Santas. The Meier’s home exhibited precious antiques and fabulous gardens. Then there was my home. My friends helped me with my eclectic decorations, including window paintings and a horse head made from garland. People commented on my huge living room window with a great view and my large cherry wood entry

door. However, the really big hit at my house is my orange tabby cat “Kaiser.” Everyone wanted to take this charmer home. People come from all over Southern California to attend this tour and many of them are repeat customers. One woman commented, as we were driving around in the rain, that she could not wait until next year to do this again. It is fun, it is fascinating, it is stimulating and, best of all, income from this event goes to scholarships for select Julian High School graduates.

All students participated in Spencer Valley School’s “Pillow Project” by creating individual fleecy pillows to give to Rady Children’s Hospital in San Diego. Each “animal” pillow was given a name, and students wrote their pillow’s story in a book with drawings that the children in the hospital could color. Last week, the teachers and four students hand delivered the pillows to the hospital staff and got to be interviewed by the local media. Check out the hospital’s Facebook to see the video clip. While Old School House students designed bee pillows, Ritchie Hall students (and some staff members) gave personalities to Nacho the Rat, Maple the Pig, Daisy the Duck, and several others! It was difficult for many to part with their new friends, but they know that the pillows will enjoy finding new homes.

Deputies are being recognized for solving a string of thefts and vandalism at Julian High School. The Julian Union High School District presented Deputies and Detectives from the Julian Sheriff's Substation with a certificate of appreciation during a board meeting on December 11th. Three people, including a juvenile, are now in custody in connection with the vandalism series that has been going on since September. They are facing felony charges of vandalism, commercial burglary and conspiracy. Damage to the school is estimated at $40,000. Paint was sprayed all over the campus. In another incident, a fire extinguisher was used to damage buildings and contaminate classrooms. Deputies began conducting extra patrols around the school. On December 6th they caught a break, seeing the suspects

Donations Of Sock And Sundries Are Needed At Spencer Valley School Please help us to help those in need by donating socks (various sizes) and sundries (toothpaste, toothbrushes, soaps, creams, etc. – travel sized and hotel items are good) by December 17th at Spencer Valley School: 4414 Hwy 78 - 760-765-0336. On Thursday night, after the school’s winter program, students, parents, and staff assemble the sundries into the socks and these will be given to the San Diego Rescue Mission. Also, students will make & bake healthy dog biscuits that will be donated to PAWS San Diego, for homeless dogs.

This year our local Community United Methodist Church of Julian celebrated its 50th anniversary. Church members decided that the best way to celebrate this special occasion was to do something for our community. With Art Cole as liaison to the folks who are in charge of Jess Martin Park, a group of volunteers from CUMCJ donated over 50 plants and planted them on the Jess Martin Park hillside near the water tank. Pictured here are Fred Fabre, Art Cole, Jeff Holt, Terry Kelly, Shirley Jones, Tricia Elisara and Richard Burns. Harvey Arntson also was working hard.

and Deputy Steve McNamara for a job well done. Your hard work saved the school district and taxpayers money in cleaning and repairing more damage from the vandalism. You are shining examples of our agency's mission to keep the public safe. In this case, a safe place for students at Julian High School.

Community Choir in rehearsal for performance.

On Sunday, December 21st at 7pm in our town hall, there will be a concert of Handel's Messiah. The Julian Community Choir will sing all the beautiful choruses from the Christmas portion of this famous oratorio. Soloists from around the county will sing the arias, and our wonderful Evans String Quartet and pianist will provide accompaniment. Please plan to attend this exciting production which has become a tradition during our holiday season. The concert is supported by the Community Methodist Church, and your free-will offering.

Students with the star, Michael Arden, of The Hunchback of Notre Dame

Happy Holidays To Everyone