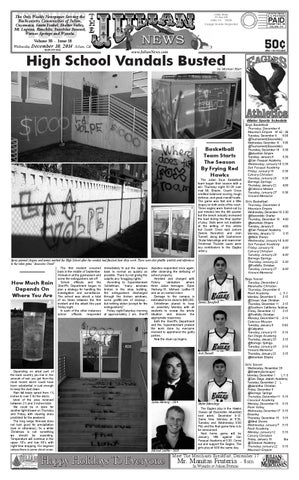 Basketball Team Starts The Season By Frying Red Hawks The Julian Boys Basketball team began their season with a win Thursday night 62-36 over rival Mt. Empire. Coach Cross credited balanced scoring, tough defense, and great overall hustle. The game was fast and a little sloppy on both ends of the court. Three eagles were fouled-out by just minutes into the 4th quarter but the bench actually increased the lead during the final quarter of play. Stats were not available at the writing of this article but Coach Cross said Juniors Dennis Beresford, and Josh Tunnell, along with Sophomore Skylar Marushige and newcomer Freshman Thunder Lopez were key contributors to the Eagles victory. Spray painted slogans and taunts marked the High School after the vandals had finished their dirty work. There were also phallic symbols and references to the video game “Assassins Creed” The first incident occurred immediately to put the campus deputies responded once again, back in the middle of September. back to normal as quickly as after observing the defacing of A break-in at the gymnasium and possible. There by not giving the school property. some fire extinguishers set off. culprits any “bragging rights.” Arrested and charged with School officials and the According to Superintendant Felony Vandalism where Sheriff’s Department began to Schlottman, “many windows three Julian teenages: Dylan plan a strategy for handling the broken in the shop building, Hartung-18, Michael Ludtke-19 investigation and surveillance. fire extinguishers discharged and an un-named minor. The school was struck a total through the broken windows, Damage to the campus is of six times between the first some grafitti..lots of cleanup... estimated to be close to $40,000. incident and the attack this past but nothing stolen (except for fire Schlottman planed to have Friday night. extinguishers)” an assembly Monday with all In each of the other instances Friday night/Saturday morning students to review the whole school officials responded at approximately 2 am, Sheriff situation and discuss the appropriate responses. Both the Sheriff’s Department and the Superintendant praised the work done by everyone involved to apprehend the guilty parties. Now the clean up begins.

How Much Rain Depends On Where You Are

Depending on what part of the back country you live in, the amount of rain you got from the most recent storm could have been substantial or just enough to keep the dust down. Rain fall totals varied from 1½ inches to over 5 for the storm. Most of the area received between 2¼ and 3 inches total. We could be in store for another light shower on Thursday and Friday, with clearing skies predicted for the weekend. The long range forecast does not look good for precipitation (rain or otherwise), So a white Christmas is not something we should be expecting. Temperature will continue in the upper 50’s and low 60’s with night time dropping 10+ degrees unless there is some cloud cover.

Happy Holidays To Everyone

Skylar Marushige The Eagles play in the Hawks Classic (at Escondido Adventist) next week, December 8-13. Game time Monday at 6:30, Tuesday and Wednesday 8:00 PM, and the final game time is to be announced. Next home game will be January 14th against San Pasqual Academy at 5:30. Come out and support the Eagles, The girls play at 4:00 the same day.