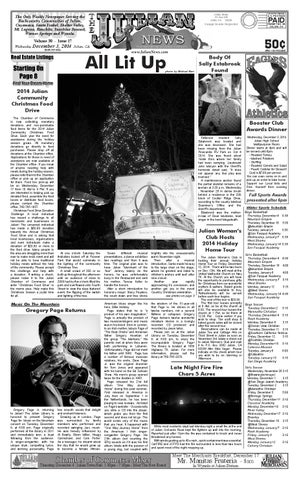 2014 Julian Community Christmas Food Drive The Chamber of Commerce is now collecting monetary donations and non-perishable food items for the 2014 Julian Community Christmas Food Drive. Each year the need for assistance during the holiday season grows. All monetary donations go directly to food purchases. Please drop off all donations at the Chamber office. Applications for those in need of assistance are now available at the Chamber office. If you know of anyone needing help with meals during the holiday season, please refer them to the Chamber office or pick up an application for them. Food box pick-up will be on Wednesday, December 17 from 10 AM to 4 PM. If you are interested in helping pick up donated food, assemble the food boxes or distribute food boxes, please contact the Chamber office, 760-765-1857. Christmas Food Drive Donation Challenge A local individual has issued a challenge to all merchants and businesses in Julian! The unnamed individual has made a $50.00 donation towards the Annual Christmas Food Drive and is asking that local businesses, organizations and even individuals make a donation of $20.00 or more to the food drive. Many people in the area are struggling more than ever to make ends meet and will not be able to have traditional holiday meals without the help of the community. Please accept this challenge and help with a donation. If writing a check, please make it to the Julian Chamber of Commerce and write "Christmas Food Drive" in the memo area. Help make this Christmas Season a joyful time for all.

Booster Club Awards Dinner Fallbrook resident Sally Estabrook was located and she was deceased. She had been missing from the Julian Pinezanita RV Park on Oct 4 2014. She was found about ½mile from where her family had been camping. Lieutenant John Maryon with the Sheriff’s homicide detail said, “It does not appear any foul play was involved.” A maintenance worker found the partial skeletal remains of a woman at 3:20 p.m. Wednesday , November 26 in dense brush behind a residence in the 200 block of Coulter Ridge Drive, according to the county Medical Examiner’s Office and the sheriff’s department. Estabrook was the motherin-law of Dave Mustaine, lead singer in the band Megadeath.

At one o’clock Saturday the festivities kicked off at Pioneer Park that would culminate in the lighting of the community Christmas Tree. A small crowd of 200 or so built up throughout the afternoon until an audience of close to 2000 had by five o’clock filled the park and overflowed onto Fourth Street to view the days featured event, the flipping of the switch and lighting of the tree.

Gregory Page is returning to Julian! The Julian Library is honored to present Gregory Page for Music on the Mountain concert on Tuesday, December 9, at 6:00 pm. Page originally performed at the library in 2011 and immediately won a loyal following from the audience. A singer-songwriter, with his unique style, compelling lyrics, and winning personality, Page

has smooth vocals that delight and enchant listeners. Growing up in London, Page was surrounded by family members who performed and recorded swinging Jazz music. He was heavily influenced by Al Bowlly, Glenn Miller, Hoagy Carmichael, and Cole Porter. As a teenager, he dreamt about the day that he would grow up to become a female African-

Seven different musical presentations, a dance exhibition two readings and then it was time. The original plan was to have Julian “Merchant of the Year” Jeremy Manly do the honors, he was unfortunately busy in the Restaurant and sent his mother, Teresa Keller to handle the honors. After a short introduction by honorary mayor Stacy Peyakov, the count down and tree shone

brightly into the unseasonably warm November night. Then after a musical introduction, Santa made his way to the large chair on the stage, where he greeted and listed to children’s wishes until well after nine o’clock. Another year rapidly approaching it’s conclusion, and another get you in the mood Country Christmas celebration. see photos on page 3

American blues singer like his hero, Billie Holiday. Page states that he is “a product of his own imagination.” Page is actually the product of two musician/singers and music was in his blood. Born in London, to an Irish mother, Moyra Page of “The Beat-Chicks” and Armenian father Gregory Hovelian of the group “The Martians.” His parents met at when they were both performing in Lebanon. Unfortunately, Page did not meet his father until 1999. Page has a number of famous musician relatives, his uncle, Dave Page Jr. was the original drummer for Tom Jones and appeared with his band on the Ed Sullivan Show. His mom’s group opened twice for the Beatles in 1965. Page released his 21st full album “One Way Journey Home” during this past summer. First released in America in July, then on September 1 in the Netherlands, he has been playing to rave reviews. As listed on Page’s website - Occasionally you slide a CD into the player, which grabs you from the first second and does not let go. The world exists only of the music that you hear. It happened with “One Way Journey Home” from the American / Irish singersongwriter Gregory Page. His 21th album (not counting the EPs) sounds as if it was his first album. Made with the passion of a young dog, but coupled with

the wisdom of the 51-year-old that Page is. He shines in all twelve numbers, not a second flattens or collapses. Gregory Page delivers twelve wonderful miniature stories in a lovingly recorded CD produced and recorded by Jason Mraz. Please join us at the Julian Library on Tuesday, December 9, at 6:00 pm, to enjoy the incomparable Gregory Page! The library is located at 1850 Highway 78, Julian. For more information, please call the library at 760-765-0370.

Julian Woman’s Club Hosts 2014 Holiday Home Tour The Julian Woman’s Club is hosting their annual Holiday Home Tour on Friday, December 12, 2014. There will be two tours on Dec. 12th. We will meet at the United Methodist Church on Hwy 78. At the Church you will have the opportunity to purchase gifts for Christmas from our wonderful crafters & quilters. Baked goods will also be available to buy. Refreshments will be served before each tour begins. The cost of this tour is $20.00. The first tour leaves promptly at 9 AM, so be at the church at 8:30. The second tour leaves the church at 1 PM, so be there at 12:30 PM. Come earlier if you wish to shop. The craft shop & baked goods sales will be closed after the second tour. Reservations can be made at Julian Tea and Cottage Arts on Third Street in Julian as soon as November 3rd. Make a check out to Julian Woman’s Club and mail it to P.O. Box 2062 Julian, CA 92036 Attn: Edie Seger. Please indicate on the check which tour you wish to be on: Morning or Afternoon.

While most residents slept last Monday night a small fire at the end of Julian Orchards Road kept fire fighters up well into the morning. Reported just after 11pm the fire was contained to brush and never threatened any homes. With winds gusting up to 40+ mph, quick containment was essential. CalFIRE and JCFPD had the fire surrounded in less than two hours and spent most of the night mopping up.

Wednesday, December 3, 2014 Julian High School Multipurpose Room Dinner starts at 4pm and will be served until 6pm. • Roasted Turkey • Mashed Potatoes • Stuffing • Roasted Carrots and Salad • Peach Cobbler for Dessert! Cost is $7.00 per person. You can even come on in and pick up an order to take home. Support our Local kids and Free Yourself from cooking dinner.