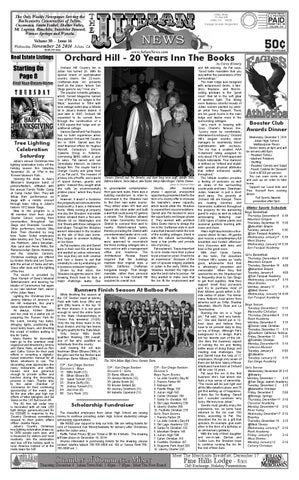 Tree Lighting Celebration Saturday Julian's annual Christmas tree lighting celebration kicks off the holiday season this Saturday November 29, at 1PM in the Pioneer Museum Park. Opening the show is Avery Ellisman's bluegrass band of pickers/fiddlers, affiliated with the annual Family Fiddle Camp at Camp Cedar Glen. They will follow their performance on stage with a mobile concert through town, riding in Julian's historic 1912 Mack Stage. New to the program is a 40 member choir from Julian Charter School, coming from communities throughout San Diego and Riverside Counties. Other performers include Way Back Then (founded by long time Taylor Guitar employees Mike Mosley and Tony Tulenko], Joe Rathburn, Jake's Mountain, Alan Land and Annie Rettic, the Ramona/Julian Dance Academy, and the Victorian Carolers. Christmas readings are offered by Kirsten Starlin and Les Turner, with the arrival of Santa and Mrs Claus after dusk and the lighting of the tree. The sound is provided by Dave Klumph of Dave's Musical Entertainment, and wearing his Master of Ceremonies hat again is our own Michael Hart, owner of the Julian News. Lighting the Christmas tree is Jeremy Manley of Jeremy's on the Hill restaurant, this year's Julian Merchant of the Year. As always, Kirsten Starlin and her crew do a stellar job of preparing the Pioneer Park for the event, moving hay bales, stringing lights, positioning life sized teddy bears, and directing the crowd of kiddies waiting in line for Santa. Many thanks for decorating town go to the volunteer crew organized and directed by Johnny and Diane Hake, as well as Ron and Cathy Ozbun for their past efforts in compiling a digitallybased instruction manual for all future volunteers to use. The decorating crew appreciates the many restaurants and coffee houses kind and generous enough to provide coffee and lunches during the decorating process in town. Thanks also to the Julian Chamber of Commerce for their continuing sponsorship of the event, and for the year after year high rise efforts of Mike Menghini and Ed Glass on the 135 foot boom lift. The 80 foot tall cedar tree is decorated with all new LED light strings, generously paid for by SDG&E in response to the Country Christmas committee's request to their public affairs officer, Juanita Hayes. Julian's Country Christmas tree lighting celebration draws up to 2000 people each year, and is treasured by visitors and local residents. Join the celebration and kick off the holiday spirit in rural America instead of at the malls down the hill!

Orchard Hill Country Inn in Julian has turned 20. With its special brand of sophisticated country charm, the 22-room, Craftsman-style inn presents itself as the place “where San Diego goes to say ‘I love you.’” The popular romantic getaway, which Sunset Magazine named “one of the top six lodges in the West,” launched in 1994 with nine cottage suites atop a hillside lot in Julian’s historic district. A year later in 1995, Orchard Hill expanded to its current form through the construction of a 6,500-square-foot lodge and an additional cottage. Owners Darrell and Pat Straube had no hotel experience when they started Orchard Hill Country Inn in 1994. Darrell was the chief financial officer for Hughes Aircraft Company’s Ground Systems Group in Fullerton, overseeing $900 million a year in sales. Pat owned and ran Serendipity Interiors, an interior design firm. The couple lived in Orange County and grew tired of, as Pat put it, “the invasion of privacy, lots of traffic, and a world of speed bumps, guards and gates.” Instead they sought what she calls “an environmentally pristine place,” which they found in Julian. However, it wasn’t a business they originally set out to build in the backcountry; it was a retirement home. While looking at property one day, the Straubes’ real estate broker showed them a four-acre hillside lot on Washington and 2nd Streets with three cottages in bad shape. Though the Straubes weren’t interested in the location as the site of their own home, they began to envision building an inn there. As Pat explains, she and Darrell were in their mid-50s at the time and wanted an active retirement. She says they are both creative and had a desire to put that creativity to use by embarking on a business endeavor together. Driven by that vision, the Straubes bought the land in 1991 knowing they’d have to face a major challenge: water. Due

to groundwater contamination from gas tank leaks, there was a building moratorium. In order to circumvent it, the Straubes had to find their own water source. They drilled down 475 feet and tapped into clean water and built a well that could pump 62 gallons a minute. The Straubes allowed the Julian Community Services District to connect their well to nearby District-owned tanks, thereby providing the District with uncontaminated water at no cost. In April 1992, phase I plans were approved to reconstruct the three existing cottages into a nine-unit inn with a management office and residence. The Architectural Review Board required that the buildings maintain their original style, a 1930s California Craftsman bungalow design. That design mandate, rather than personal preference, is how Orchard Hill acquired its overall look.

Shortly after receiving phase I approval, unexpected opportunity presented itself in the form of a county offer to increase the townsite’s sewer capacity, which would allow the Straubes to expand their accommodations. Darrell and Pat decided to seize the opportunity and began phase II. They worked with architect Erika Goetz-Harris to design the inn in the Craftsman style in such a way that it would match the look of the existing cottages, blend in with the natural surroundings, keep a low profile and provide lots of privacy. Pat explained, “It was important to us to create more than a place to put a head on a bed. It had to be an experience.” Because of the lack of upscale lodging available in Julian in the early 1990s, the Straubes decided the high-end was the best niche to pursue. Yet they wanted to make sure that the inn fit the environment well

While finishing the season at the CIF Section meet at Morley Field with both boys (5th) and girls (6th) teams in the top 10 for their division, it is not good enough to send the entire team to the State Championships in Fresno this weekend (11/29). Only the top three team in the boys division and top two teams for girls qualify for the State Meet. Only Senior Wills Booth qualified, finishing 13th overall, one of five who qualified as individuals from the county. Just missing the cut was freshman Ethan Ellisara (16th), in the girls race the top finisher was freshman Esme Killiane (20th). CIF - San Diego Section Division 5 - Boys 13 Wills Booth (12) 16 Ethan Elisara (9) 29 Isaiah Tunnell (12) 35 Shane Duffy (10) 76 Joshua Tunnell (11) 84 Jed Kron (9) 86 Cory Flack (10)

and felt relaxing. As Pat says, “Good taste mandates that you stay within the parameters of the surroundings.” The main lodge was designed with wraparound decks, a twostory fireplace, and floor-toceiling windows in the “great room” that let in the soft glow of western light. The dining room features colorful murals of Julian scenes painted by pleinair artist Tony Trasport. There are ten guest rooms in the main lodge and twelve more in the surrounding cottages. Very much in keeping with Coco Chanel’s famous line, “Luxury must be comfortable, otherwise it is not luxury,” Orchard Hill’s elegant country décor manages to seamlessly blend sophistication with coziness. The inn has a coveted AAA 4-diamond rating assigned to only about 5% of AAA-approved hotels nationwide. Four diamond is defined as “refined and stylish with upscale physical attributes that reflect enhanced quality throughout.” The hillside location provides a feeling of seclusion as well as views of the surrounding countryside and town. Downtown Julian, however, is just a short stroll away. The grounds at Orchard Hill are tranquil. There are reading benches and hammocks scattered throughout the property for the wandering guest to enjoy as well as natural landscaping featuring over 2,000 types of native plants and seasonal gardens teeming with roses and irises. A two-night stay includes a fourcourse dinner for two. All guests also receive a complimentary full breakfast and hosted afternoon hors d’oeuvres with wine and beer in the great room. With chef Calvin Canine at the helm, Pat describes Orchard Hill’s cuisine as “really good, wholesome food that is attractively presented and memorable.” When they first opened the inn, the Straubes had to frequently drive to San Diego to get food supplies. Now they support small food purveyors and try to purchase most of their kitchen goods within a 60mile radius of Julian. The dinner menu features local wines from wineries such as Orfila, Shadow Mountain, Woof’n Rose and La Serenissima. Running the inn is a “huge job,” Pat said, “and very handson.” She and Darrell put in 12hour days and believe they have to be present daily to stay on top of things. Although Pat’s background is in design, that’s not her favorite part of the job. She likes the business aspect of running the inn and finding better ways of doing things and meeting new challenges. She and Darrell have the help of 17 employees, though only seven of them are full-time. Many of those employees have been at Orchard Hill for over 10 years. Pat says the inn is the first business she’s had where she feels a true sense of ownership. “The music will be just right and all the little details in place, and I’ll get this welling up of happiness. It feels like I’m floating. Darrell and I consider ourselves very lucky. We truly love Julian.” Guests must greatly enjoy the experience, too, as some have returned to the inn over 100 times, according to Pat. She describes the inn as a gift that spouses, for example, give each other in the form of a birthday or an anniversary getaway. With the help of their daughter and son-in-law, Darrian and Collins Lum, the Straubes hope to continue running the inn for the rest of their lives.

Booster Club Awards Dinner Wednesday, December 3, 2014 Julian High School Multipurpose Room Dinner starts at 4pm and will be served until 6pm. • Roasted Turkey • Mashed Potatoes • Stuffing • Roasted Carrots and Salad • Peach Cobbler for Dessert! Cost is $7.00 per person. You can even come on in and pick up an order to take home. Support our Local kids and Free Yourself from cooking dinner. Fall Sports Awards presented after 6pm