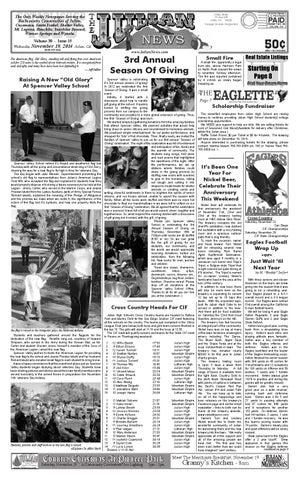 Spencer Valley School retired it’s frayed and weathered flag last Thursday with all the pomp and circumstance deserving of Old Glory, clearing the way for a new flag to fly high in time for Veterans Day. The day began with Julie Weaver, Superintendent presenting the school’s old flag to representatives from Julian’s American Legion Post 468, who accepted the flag and explained to students how they would properly dispose of it during a future ceremony to be held at the Legion. Jimmy Carter, who served in the Marine Corps, and Jeanie Priester-Mudd from the Ladies Auxiliary, (wife of Army Special Forces Richard Mudd), explained the meaning of the Pledge of Allegiance and the promise we make when we recite it, the significance of the colors of the flag and it’s symbols, and how one properly folds the flag.

The American flag, Old Glory, standing tall and flying free over American soil for 228 years is the symbol of our beloved country. It is recognized from near and afar, and many lives have been lost defending it. — Jeff Miller

Spencer Valley is celebrating it's 3rd annual season of giving! In 2012 we celebrated the first Season of Giving. It was a small event. Initially, it started with a discussion about how to handle gift giving at the school. It quickly turned to shifting the giving process from our campus to the community and possibly to a more global extension of giving. Thus, the first “Season of Giving” was born. We started simply by gathering donations from the amazing families that attend Spencer Valley. We planned activities that would help bring cheer to senior citizens and nourishment to homeless animals. We practiced simple entertainment, for our winter performance, and shopped for “lots” of hot chocolate. Then, finally ready, we invited the families of Spencer Valley to join us for our first annual “Season of Giving” celebration. The night of the celebration was full of excitement and anticipation of fun, family and the warmth of community. The students sang songs, told jokes and read poems that highlighted the sweetness of the night. After the performances, we set up stations where families could share in the giving process by stuffing new socks with sundries to give to the homeless, rolling out dough and cutting it into shapes to create treats for shelter animals or creating cards and writing cheerful sentiments in them to brighten the spirits of senior citizens, and our troops abroad, unable to spend the season with family. When all the socks were stuffed and there was no more hot chocolate to float our marshmallows in we were left to reflect on our first “Season of Giving” celebration. We all agreed that the celebration was a success! It was full of all you would expect; cheer, laughter and togetherness. So, what inspired the evening started with a discussion of gift giving but it ended, with the gift, of giving. Please join Spencer Valley School in celebrating the 3rd Annual Season of Giving on Thursday, December 18th at 7:00pm until socks are all stuffed (8:00 or so) So we can grow the the gift of giving for our students, our community, and the world, we would appreciate receiving donations, before our celebration, from the following list: New socks for men, women and children Travel size soaps, shampoos, conditioner, lotion, q-tips, deodorant, razors, kleenex etc., Dog treats/toys, dog food, collars, leashes, Cheerios cereal, Please drop off all donations at the Spencer Valley School Office. Thanks to all for all you do! See you at the celebration :)

the flag is raised as the trumpeter plays the National Anthem. Students and teachers gathered around the flagpole for the dedication of the new flag. Reveille rang out, courtesy of Howard Simpson, who served in the Army during the Korean War, as Mr. Carter and student Shooter Jones, himself a member of the Sons of the American Legion, raised the new flag. Spencer Valley wishes to thank the American Legion for providing the new flag to the school and Jeanie Priester-Mudd and her husband Richard Mudd who donated small flags to each student to bring home. It was a happy coincidence that this event took place just as Spencer Valley students began studying about Veterans Day. Students have been sharing pictures and stories about their own family members who served honorably in the armed forces in preparation the November 11th Veterans Day holiday.

Students, parents and staff look on as the new flag is raised. all photos by Albie Stark

Julian High Schools Cross Country teams are headed to Balboa Park and Morley Field for the San Diego Section CIF meet featuring all the schools on the county. The teams just competed in the Citrus League Final (see below) both boys and girls team runners finished in the top 15. The girls will start at 11:10 and the boys at 12:50. The CIF meet will qualify runners and teams for the State CIF meet in Fresno on Thanksgiving weekend. 1 2 3 4 5 6 7 8 9 10 11 12 13 14 15

A small fire, apparently a legal burn pile, above Harrison Park on North Peak caused fire crews to scramble Sunday afternoon. The fire was reported contained by 4 o’clock as crews began mopping up.

It’s Been One Year For Nickel Beer, Celebrate Their Anniversary This Weekend Nickel Beer will celebrate its first anniversary the weekend of November 21st, 22nd and 23rd at the brewery tasting room at 1485 Hollow Glen Road. The brewery occupies the old sheriff’s substation, now dubbed the sudstation with a cozy tasting room and a spacious outdoor patio that is dog friendly. To mark the occasion, owner and head brewer Tom Nickel will be releasing several new beers including Rum Barrel Aged Kupfernickl Barleywine, which was aged 6 months in a Jamaican rum barrel and Tripp’s Tripel, a Belgian-style Tripel that is light colored but quite strong at 9% alcohol. The Tripel is named for co-owner Lindsey Nickel’s family who lived in the area at the turn of the century. In addition to new beer, there will also be more beer as the brewery is expanding its current 12 tap set up to 16 taps this week. With the expanded taps, look for Julian Hard Cider to be served in addition to the beer. And there will be food available on Saturday the 22nd from local favorites Jeremy’s on the Hill. The brewery has fast become an integral part of the community. Nickel beer was on tap at many of the town functions at Menghini winery including The Dance, The Blues Bash, Apple Days and the Grape Festa and at the local Octoberfests in town. The brewery has donated nearly $2000 in its first year to Julian charity groups. The brewery tasting room is open 5 days a week from Thursday to Monday. A full range of beers is available from the light Back Country Gold to the pitch black Stonewall Stout with plenty of options in between like Devil’s Copper Red Rye Ale, Volcan IPA and Julian Pale Ale. You can keep up to date on all of the happenings and beer releases on the brewery’s Facebook page and via the email newsletter – links to both can be found at the brewery website, www.nickelbeerco.com. Owners Tom and Lindsey Nickel would like to thank the wonderful community of Julian for welcoming them and the new brewery into the town. “We really appreciate all of the support and all of the amazing people we have met. The first year has been even better than we could have imagined” said Lindsey.

Eagles Football Wrap Up -orJust Wait ‘til Next Year

With three seniors and eleven freshmen on the team, we knew going into the season that it was going to be a rebuilding year. Your Eagles played to a 4-5-1 overall record and a 3-3 league record. Our Eagles were ranked 51st overall among the California 8-man football teams. We will be losing 4 year Eagle Kellen Regalado, 3 year Eagle Darren Duffy and 2 year Eagle Drew Bullock. Kellen had a good year, coming back from a devastating knee injury. Kellen’s work ethic and playing attitude were fantastic. Kellen was a key member of both the Eagles offense and defense. Kellen was in the Eagles backfield and the leader of the Eagles linebacking corps. Kellen finished his senior season with 390 yards on 45 carries for 3 touchdowns and 12 receptions for 136 yards on offense and 59 tackles, 7 sacks and 1 fumble recovered. Kellen always gave 110% in practice and during the games will be greatly missed. Darren also had a very good year as a wide receiver, running back and defensive back. Darren was 3 for 5 and 27 yards in passing attempts had 67 rushes for 448 yards and 9 receptions for another 152 yards. On defense, Darren had 64 tackles, 2 sacks, 1 pick and 1 fumble recovery. He was the team’s scoring leader with 74 points. Darren’s steady play and quiet efficiency will be sorely missed. Drew came back to the Eagles after a 2 year layoff. Drew appeared in four games this season on the Eagles defense continued on page 9