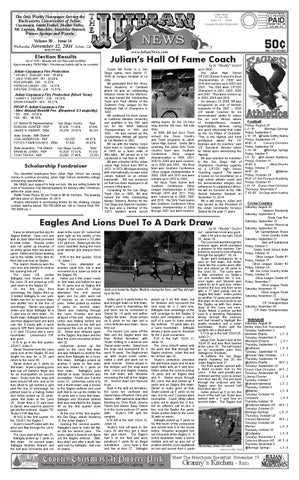 Julian’s Hall Of Fame Coach Coach Bill Porter is a San Diego native, born March 17, 1939 at Scripps Hospital in La Jolla. Bill graduated from the ArmyNavy Academy in Carlsbad where he was an outstanding distance runner for the Warriors. He was named the Outstanding Track and Field Athlete of the Southern Prep League by the Breitbard Hall of Champions in 1958. Bill continued his track career at California Western University and qualified in the 880 yard run for the NAIA National Championships in 1961 and 1962. He was named as the Outstanding Athlete (all sports) at Cal Western in 1962. Bill ran with the Marine Corps track team in Quantico, Virginia in 1963 as a team mate of Billy Mills. Bill served as a 1st Lieutenant in Viet Nam in 1965. Bill was a teacher at the Julian Junior High School from 1967 to 1972. In 1973, Bill began working with internationally renown artist James Hubbell as an artisan blacksmith. Bill has produced art that has been displayed in all corners of the world. Competing for the San Diego Track Club in 1980, Bill was named the AAU Outstanding Master Distance Runner for the San Diego and Imperial Counties. He was also a member of the SDTC Masters world record

up in 2008. The Julian High School CIFSDS Division 5 record is Boys Championships in 2009 and 2010 and runners-up in 2002 and 2003. The Girls were CIFSDS Champions in 2001, 2002, 2006 and 2007. They were runners-up in 2003, 2004 and 2010. On January 14, 2008, Bill was recognized as one of thirteen recipients of the 2007 – 2008 CIF Model Coaches for his demonstrated ability to imbue the six core ethical values of trustworthiness, respect, responsibility, fairness, caring and good citizenship that make up the Six Pillars of Character. “This is the highest and most prestigious award the CIF bestows upon its coaches,” said CIF Executive Director Marie M. Ishida upon announcing the Awards. Bill was selected for induction to the San Diego Hall of Champions Coaching Legends as a CIFSDS High School Coaching Legend. The award is based on his excellence as a high school athletic coach and his demonstrated integrity and adherence to established ethics. He will be honored at the 16th Annual Induction Banquet on November 12, 2014. Bill is still living in Julian and has served as the President of the Julian Community Services District for the past 11 years.

Eagles And Lions Duel To A Dark Draw It was an almost perfect day for Eagles football. Clear, cool and with an East Wind that promised to blow colder. Shuuluk Linton was not suited up because of an ankle sprain from last week’s game. Kellen and Darren walking out to the middle of the field for their last coin toss as Eagles. The Jewish Academy won the coin toss and elected to receive the opening kick off. The Lions QB, Jordan Battaglia, took Skyler’s kick at the Lions’ 20 and picked up a 60 yard return to the Eagles 20. On the first play from scrimmage, the Eagles fired up D limited Battaglia to one yard. Kellen met him on second down and stuffed him at the line of scrimmage. Darren one-upped Kellen and stuck Battaglia for a 2 yard loss on third down. On fourth down, Battaglia faked a run and then stepped back and went over the D backs with a quick pass to WR Rami Lieberman for a 21 yard TD pass and a Lions touchdown. Lieberman’s PAT was good. 9:18 to go in the first quarter, SDJA 7, Julian 0. Daniel Streamer took the Lions squib kick at the Eagles 30 and fought his way for a 25 yard return to the Lions’ 45. Daniel picked up 5 yards on first down. Skyler’s opening pass was just off Darren’s finger tips for an incompletion on second down. Skyler took the snap and went around left end. Just as he was about to get tackled a yard past the line of scrimmage, he pitched back to a trailing Kellen and Kellen picked up 20 yards. Julian first down at the Lions 20. Skyler fired a 15 yard laser to Daniel, who used his speed to get into the endzone. Eagles TD. Skyler’s PAT flew true. At 8:02 in the first quarter, it’s the SDJA 7, the Eagles 7. Skyler’s kickoff sailed with the wind and flew through the Lions’ endzone. The Lions start at their own 20. Battaglia picked up 7 yards on first down. On second down, Battaglia fumbled forward and the ball was recovered and run

down to the Lions’ 39. Lieberman went right up the middle of the Eagles’ D and scored a TD after a 61 yard run. Daniel got into the Lions’ backfield during the extra point attempt and stopped them cold. 6:58 in the first quarter, SDJA 13, Julian 7. The Lions attempted an onsides squib kick, but it was recovered by a Julian up back at the Eagles’ 44. Kellen put it into power mode on first down and bulled his way for 13 yards and an Eagles first down at the Lions 43. Skyler attempted the end around again and his pitch went out of bounds as an incomplete pass. Kellen picked up another 5 yards on second down. Daniel was motoring through the Lions D-backs and was stripped of the ball. Nyemetaay Linton was trailing behind and alertly pounced on the ball and recovered the rock at the Lions 20. Daniel was stripped again on the Eagles’ first down and this time the Lions recovered at their own 20. Lieberman picked up five yards on the Lions first down and was followed by another five yards from Battaglia for a Lions’ first down. Battaglia picked up another 5 yards on first down but was limited to 2 yards on third down. Battaglia’s pass attempt to Isaac Shoshani was incomplete. Fourth and 3 at the Lions’ 37. Lieberman came in to kick a fourth down, saw a crease in the Eagles defense and used both feet to run up the middle for 10 yards and a Lions first down. Battaglia and Shoshani nibbled their way downfield to the Eagles 40 as the first quarter clock expired. At the end of the first quarter, the San Diego Jewish Academy 13, the Julian Eagles 7. Opening the second quarter, Battaglia’s pass to Kahn fell flat, as did his second pass. The Lions called a timeout out figure out the Eagles defense. Well, they didn’t and after a weak, two yard rush by Battaglia. Ball over on downs.

Early on it looked the Eagles Would be chasing the Lions, and They did right up to the last. Kellen got in 4 yards before he was brought down on first down. Skyler’s pass to Nyemetaay fell just short, but he connected to Daniel for 14 yards and anther Eagles fist down. Skyler picked up 8 yards on his own and a Lions defender was down. Injury time out. The injured Lion came off the field and the Eagles went into their Rocket formation, with Skyler shifting to a wideout and Daniel under center. Daniel took the snap and scampered for a quick 16 yards. The Eagles lined up, with Skyler under center, called a shift and went out to wide receiver. Daniel stayed in the shotgun and the snap went wild. Lions and Eagles chasing the ball down, with Streamer recovering the ball at the Eagles 43. Second down and Ramona to go. Back in the split out formation, the Lions are confused and Daniel takes off behind Chris and Mason. With awesome downfield blocking by Chris Boyd, Jeremy Flores and Mason Baay, Daniel is in the Lions endzone 57 yards later. Skyler’s PAT split the uprights. 8:19 left in the half, SDJA 13, Julian 14. Skyler’s kick off went to the Lions 20 and they got a short two yard return. The Eagle’s had 9 on the field and were penalized 5 yards for an illegal substitution. Lions have a first and five at their 27. Battaglia

picked up 3 on first down, but he fumbled and recovered the next snap for a 2 yard loss. Battaglia took advantage of the soft coverage by the Eagles D backs and completed a crème puff of a pass to Kahn behind the defense. 74 yards later, it’s a Lions touchdown. Battaglia shoots a quick pass to Shoshani for the 2 point conversion. 6:32 in the half, SDJA 21, Julian 14. The Lions kickoff sailed with the wind and flew through the Eagles endzone, Julian first and ten at their own 20. Skyler’s protection shredded like wet tissue paper and he was taken down with an 8 yard loss. Kellen outran the Lions to pickup 14 yards and an Eagles third and 4. Daniel snuck through the Lions’ den and picked up 8 yards and an Eagles first down. Daniel is really good at that. Skyler picked up 6 yards on his own, but his next 2 passes were incomplete. Coach White called a time out to steady the O line, but an offside's call on the O line, cost the Eagles five yards. Skyler punted down to the Lions’ 30 with no return. Battaglia picked up 5 yards on his first touch of the possession and almost took it to the house before Streamer wrangled him out of bounds at the Eagles’ 9. A rookie linebacker made a rookie mistake and set up way out of position and the Lions capitalized on him and scored from 9 yards

out. Lieberman’s kick was good. With 2:56 left in the half, SDJA 28, Julian 14. The Lions kick went through the endzone again, which prompted a question to this reporter, Can points be scored by kick off going through the uprights? Uh, no. Skyler went backwards for a yard on first down, but Kellen made like the coyotes were after him and picked up 48 yards to the Lions 33. The Lions were a little perturbed by Kellen’s run and shredded the O line, once again, and Steamer was nailed for an 8 yard loss. Kellen covered the loss and then some with a 17 yard pickup and an Eagles first down. Kellen picked up another 14 yards and another first down on his next touch to set the Eagles up with four downs deep in the Lions red zone. Skyler flicked a picture perfect pass to a streaking Nyemetaay slicing through the endzone and had himself a highlight film quality reception and a Julian touchdown. Skyler split the uprights into a stout wind. 0:11 to go in the half, SDJA 28, Julian 21. Mayer took Skyler’s kick at the SDJA 25 and was flock tackled at the Lions’ 35. The half ended on an incomplete pass from Battaglia to Shoshani. At halftime, the San Diego Jewish Academy has 28, the Julian Eagles have 21. The third quarter opened with a failed on-sides kick by the Lions. A five yard penalty was enforced and the Lions re-kicked from their own 40. The kick went through the endzone and the Eagles open the second half from their own 20. Kellen picked up 8 on his first touch of the half, but Skyler was sacked with a 5 yard loss on second down. The Eagles lost