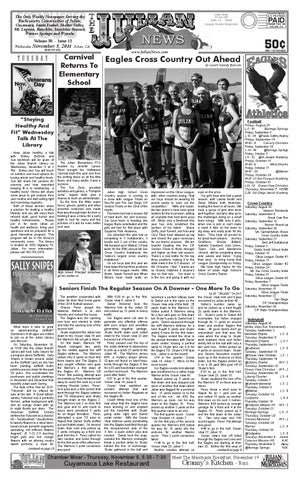 “Staying Healthy And Fit” Wednesday Talk At The Library Keep Julian Healthy, a talk with Shirley DuErmit and Sue McIntosh will be given at the Julian Branch Library on Wednesday, November 5 at 2 PM. Shirley and Sue will touch on nutrition and local options for buying whole and healthy foods. Sue will share her passion for exercise and how important keeping fit is to maintaining a healthy body! Shirley will share some ways to get unstuck from your routine and start eating right and exercising regularly. Both of these women share a passion for leading a healthy lifestyle and you will enjoy their relaxed style, good humor and healthy refreshments. Please join in for some ideas on health and wellness, bring your questions and be prepared for a good interactive program. This program will be in the library’s community room. The library is located at 1850 Highway 78, Julian. For more information, please call 760-765-0370.

The Julian Elementary PTO headed by Jennifer Larson Reed brought the Halloween Carnival back this year and from the smiling faces on all the little faces, and many adults, it was a success. The Fun Zone, provided activities and games, a “Pumpkin Jump”, supper slide, plus a chance to dunk an administrator. By the time the littler super heros, ghouls, goblins and other assorted costumed kids made their way through town for trick or treating it was a menu for a early night to bed for many and the promise of it will be even better next year.

High School Principal Schlottman got his zombie on.

Julian High School Cross Country season is coming to a close with League Finals on Nov.7th and The San Diego CIF Section Finals on the 22nd of the month. The team has had a season full of hard work, fun and success. Our boys team is heading into league finals undefeated and the girls are tied for first place with Guajome Park Academy. Our schedule this year had us competing in 5 invitational’s, 3 locally and 2 out of the county. We traveled up to Walnut, CA last week for the 66th annual Mt Sac Cross Country Invitational, the “nation’s largest cross country invitational.” On our boys side this year we have taken the top three positions in all three league meets, Wills Booth, Isaiah Tunnell and Ethan Elisara have made quite an

impression on the Citrus League, with other coaches joking, “that our boys should be wearing 60 pound packs to even out the competition.” Wills and Isaiah, the two senior’s have been great leaders for the boys team, setting an example that hard work pays off, Ethan only a freshman this year has only scratched the surface of his talent. Shane Duffy, Josh Tunnell, Jed Kron and Cory Flack have stepped up big and closed the gaps necessary for our team’s success. We are hopeful heading into the CIF Section Finals to finish stronger and higher up than last season. There’s a real battle for the top three positions making it to the state meet in the D-5 division, of the 24 teams I feel 7 teams are so closely matched it anyone’s day on that day. Our team is in the mix, and going in with our

eyes on the prize. Our girls have also had a great season, with Lakota Booth and Esme Killiane both freshman, leading the team in all races. We have a group of girls who work well together, and who step up to the challenges being on a small team brings. With only 9 girls, when one is sick or can’t make a meet it falls on the team to dig deep and really push for the team. They have all proved to be great team players. Journey Smothers, Brooke Ballard, Isabella Copeland, Livia Limon, Taylor Cole and Mackenzie Vincent will be competing along side Lakota and Esme trying their best to bring home that League Championship on Friday. We have high hopes for the future of Julian High School’s Cross Country Teams.

What does it take to grow an award-winning daffodil? Gardeners of all ages are invited to join us at the Julian Library and find out! On Saturday, November 18, at 10:00 AM, the Julian Branch Library will host Sally Snipes for a program about Daffodils. Sally Snipes is known around Julian as the Daffodil Lady as she has been planting daffodil bulbs publicly around Julian for the past 24 years. She coordinates the purchases and public plantings in November and December that beautify Julian each Spring. The Bulb of the Year for 2015, “Falconet”, will be offered for sale at the talk. A Grant Mitsch variety, Falconet has a perfectly formed, yellow background with and an orange crown with up to eight florets per stem. The American Daffodil Society defines the Falconet as a division 08 – Tazetta which "Usually three to twenty flowers to a stout stem; leaves broad; perianth segments spreading, not reflexed; flowers fragrant". (8 Y-O) 3-5 dazzling bright gold and rich orange flowers with an alluring musky sweet perfume; a must for continued on page 13

The weather cooperated with Julian for their final home game of the 2014 football season. Chance Perez played the National Anthem a la Jimi Hendrix and rocked the house. The Eagles won the opening coin toss and elected to defer and take the opening kick of the second half. Skyler squibbed the Julian kick down to the Ocean View 35 and the Warriors did not get a return. On first down, Warriors RB Naputi managed two yards up the middle against the stiff Eagles defense. The Warriors netted only 9 yards on their first three downs and The Eagles D was caught offsides and gave the Warriors a first down at the Eagles 43. Warriors QB Perez’ first passing attempt was incomplete as Perez threw the ball away to avoid the sack by a bull rushing Shuuluk Linton. Perez’ next pass was a dink screen that went through the Eagles safeties and TE Mascareno was finally brought down at the Eagles 2. The Warriors lost 2 on their first and goal and to add insult to injury, were penalized 5 yards for an illegal formation. Perez attempted a sure TD pass to Naputi that Darren Duffy sniffed put and batted down. On second down, their rush only picked up 5 yards, bringing up a third and goal from the 4. Perez called his own number and broke through for the first score of the afternoon. The Warriors 2 point conversion was good.

With 6:39 to go in the first, Ocean View 8, Julian 0. Daniel Streamer took the Warriors kick at the Julian 28 and picked up 13 yards in heavy traffic. Our Eagles were not able to generate any effective offense with poor snaps and penalties generating negative yardage. Skyler fourth down punt sailed down to the Ocean View 22 and bounced out of bounds. Perez passed over the top of the Julian defense to Mascareno to pick up a quick 23 yards to the Julian 45. The Warriors Jersey #36, a mystery player whose ID was not found on MaxPreps, broke through the Eagles D line for a 55 yard touchdown scamper on their next touch. The Warriors point after failed. 4:37 to go in the first quarter, Ocean View 14, Julian 0. Ocean View squibbed an onsides attempt that was recovered by Kellen Regalado at the Eagles 40. Coach White tried one of the new plays that the Eagles have been working on and emptied put the backfield with Skyler going wide right and Daniel under center. With the Ocean View defense easily penetrating into the Eagles backfield through the inexperienced side of the O line, a quick action play was needed. Daniel took the snap, avoided the Warriors onslaught, threw a perfect strike to Skyler behind the line of scrimmage. Skyler gathered in the ball and

launched a perfect lollipop back to Daniel out in the open on the Ocean View side of the field. 28 yards down to the Warriors 32. Kellen pulled 8 Warriors along for a four yard gain on first down but Skyler’s pass to Daniel lost 2 yards. Daniel squeezed through the stiff Warriors defense for a hard fought 6 yards and Skyler added 4 more for the first down. The Eagles ended the drive in the spread formation with Daniel under center, tossing a perfect spiral to Skyler who ran it in for the Eagles TD. Skyler’s PAT was true. Julian is on the board! 1:54 in the quarter, Ocean View 14, Julian 7. We’re on the score board. Our Eagles onside kick attempt was smothered by a rather large Warrior at the Ocean View 43. Naputi picked up 5 yards on first down and was stopped just short of another first down when Julian was flagged for a personal foul. 15 yards tacked on to the end of the run. Mr. #36, the Warriors up back, ran his way down to the Eagles 18. Perez picked up another 2 yards as the first quarter came to an end. The first quarter score: Ocean View Christian 14, Julian 7. On the first play of the second quarter the Warriors #36 bulled his way for 16 yards into the endzone for another Warrior score. Their 2 point conversion failed. 11:46 to go in the first half, Ocean View 20, Julian 7. Another onsides attempt on

the Ocean View kick and it was recovered by Julian at their 45. Kellen’s number came up and he picked up a hard fought 20 yards down to the Warriors’ 35. Skyler’s pass to Daniel fell incomplete, but Kellen charged through for 11 yards on second down and another Eagles first down. All good deeds don’t go unpunished and that was the case when the snap to Skyler went nowhere close and Kellen alertly fell on the ball with only a two yard loss. Kellen picked up 4 yards on second down. Skyler and Dennis Beresford couldn’t hook up in the endzone on third down, but the Eagles picked up 3 on a 38 yard field goal off of Skyler’s foot. 9:33 to go in the first half, Ocean View 20, Julian 10. Skyler squibbed the kick off to the Warriors’ 47 on there was no return. Perez threw a short pass to Naputi for an 1 yard pick up and netted 15 yards an another first down on his next 3 rushes. Warriors’ #36 picked up enough yardage for a third and 4 at the Eagles 16. Perez picked up 6 and the first down at the Julian 10. Two runs later and 336 scored again. Perez’ Pat attempt was good. 4:46 to go in the half, Ocean View 27, Julian 10. Ocean View’s kick off rolled through the Eagles end zone and the Eagles are starting at their own 20. Before the first snap of continued on page 3