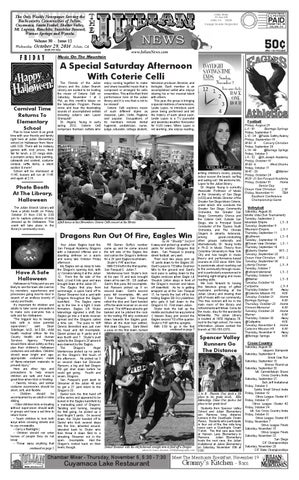 Plan to have lunch & an great time with your friends and family right here at Julian Elementary school on Halloween from Noon until 3:00. There will be midway games with cool prizes, food fair for lunch, a 22' mega slide, a pumpkin jumpy, face painting, cakewalk and contest, costume contest, raffle items, a silent auction & more! School will be dismissed at 11:45, busses will run at 11:45 and again at 2:15.

The Friends of the Julian Library and the Julian Branch Library are excited to be hosting the music of Coterie Celli on Saturday, November 1 at 2 PM, as this month’s Music on the Mountain Program. Please come and hear the fascinating sounds of accomplished cellists including Julian’s own Laurel Granquist! Dr. Angela Yeung in early spring 2012, Coterie Celli comprises fourteen cellists who

enjoy coming together to make and share beautiful music that is composed or arranged for cello ensembles. This will be their third performance here at the Julian library and it is one that is not to be missed! Coterie Celli explores music of such different styles as classical, Latin, Celtic, Ragtime and popular. Occupations of its members include dental hygienist, pediatrician, nurse, judge, educator, college student,

television producer, librarian, and biologist. Each member is an accomplished cellist who enjoys sharing his or her musical talent with others. This year, the group is bringing a special mistress of ceremonies, Leslie Lopez, to introduce each piece being performed and tell the history of each about each. Leslie Lopez is a TV journalist and weekday weather forecaster for KUSI news. When Lopez is not working, she enjoys reading,

Photo Booth At The Library, Halloween The Julian Branch Library will have a photo booth on Friday, October 31 from 2:30 to 3:30 pm to capture pictures of kids dressed up for Halloween. This event will take place in the library’s community room.

Have A Safe Halloween

Halloween is Friday and you are likely to see the town site overrun by monsters, superheroes and princesses going door-to-door in search of an endless bounty of candy and treats. It's important for children and adults to take some precautions to make sure everyone has a safe and fun Halloween. “The biggest key to keeping kids safe is close parental supervision,” said Dean Sidelinger, M.D., M.S.Ed., child health medical officer for the County Health and Human Services Agency. “Parents should think about safety as they plan their children’s Halloween costumes and activities. Children should wear bright and ageappropriate costumes made of flame-retardant materials to prevent injury.” Here are other tips and precautions to help ensure children are safe and have a great time when trick or treating: • Swords, knives, and similar costume accessories should be short, soft, and flexible • Children should be accompanied by an adult or older sibling • Older children trick-or-treating without supervision should walk in groups and have a set time to return home • Teach children to look both ways when crossing streets and to use crosswalks • Carry a flashlight ( • Children should not enter homes of people they do not know • Throw away anything that continued on page 5

Your Julian Eagles beat the San Pasqual Academy Dragons with a balanced offense and a daunting defense on a warm and sunny late October Friday afternoon. My Eagles set up deep to take the Dragon’s opening kick, with JJ Corrales taking it at the Julian 12. From the far side of the field, JJ put it into gear and was brought down at the Julian 35. The Eagles first play from scrimmage, a quick hand off to Daniel Streamer lost a yard with Dragons throughout the Eagles backfield. The Eagles came up to the line in a tight 3 back formation, Eagles QB Skyler Marushige signaled a shift; the Eagles go into a 4 wide receiver spread and the Dragons called a time out. The pass to WR Dennis Beresford was just over his head and fell incomplete. Daniel picked up 4 yards and it was fourth and 7. Skyler’s punt sailed to the Dragon’s 25 where it was downed by the Eagles. The Dragon’s Angel Monterossa picked up no yards on the Dragon’s first touch of the afternoon. He picked up 3 on second down but Donovan Ransom, a big and fast Dragon RB got shut down before he could get going. Fourth and seven, Dragons. San Pasqual’s punt went to Streamer at the Julian 40 and he got a 27 yard return to the Dragon’s 33. Daniel took the first hand off of the series and appeared to be buried in the Eagles backfield by a marauding pack of Dragons. Twisting and turning, keeping his feet going, he picked up a hard fought 5 yards. On second down, the Skyler handed off to Daniel who took several steps into the line, wheeled around, lateraled back to Skyler who then threw it down field to a streaking Streamer out in the open. Incomplete. Had the Dragon’s rocked back on their heels, though.

RB Darren Duffy’s number came up and he came around the left side of the Eagles line and outran the Dragon’s defense for a 28 yard Eagles touchdown. Skyler’s PAT was true. With 5:54 left in the first quarter, San Pasqual 0. Julian 7. Monterossa took Skyler’s kick at his own 15 and was brought down at his own 38. QB Jasthan Gant’s first pass fell incomplete, but Ransom picked up 5 on second down. Gant’s second pass fell incomplete, 4th and 5 San Pasqual. San Pasqual rolled the dice and Gant handed off to the wide receiver on an end around. The WR was about to get tackled and he pitched the rock to the trailing RB who continued down towards the Eagles goal. When all the dust had settled, first down Dragons. Gant faked a pass on the first down, tucked

it away and picked up another 10 yards for another Dragons first down. San Pasqual is playing street football, very well. Their next two plays pick up 15 yards down to the Eagles 36. Gant’s pass to TE Mike Goehner falls to the ground and Gant’s next pass is sailing down to the Eagles endzone when Eagle LB Shuuluk Linton steps in front of the Dragon’s receiver and takes off downfield. As he is getting wrapped up at the San Pasqual 17, he hands the ball off to the trailing Eagles DB Ozzy Martinez who gets it ball down to the Dragon’s 10. First down Julian. Skyler took the ball up the middle and bulled his way behind C Mason Baay and scored the Eagles second TD of the quarter. Skyler’s PAT split the uprights. With 3:59 to go in the first continued on page 7

writing children’s books, playing indoor soccer, the beach, surfing and eating out! We welcome Ms. Lopez to the Julian library. Dr. Angela Yeung is currently Associate Professor of Music at the University of San Diego (USD) and Artistic Director of the Greater San Diego Music Coterie, under which she conducts the Greater San Diego Community Orchestra, the Greater San Diego Community Chorus and the Coterie Celli. Outside San Diego, she is Principal Guest Conductor of the Tijuana Youth Orchestra, and The Chorale Singers in Jakarta, Indonesia, among guest-conducting other groups nationally and internationally. Dr. Yeung holds a Ph.D. in Music Theory from Columbia University in New York City and has taught in music theory and performance-based courses at USD since 1994. She is passionate about reaching out to the community through music, and is particularly experienced in teaching sight-singing and music reading skills. We look forward to having this fabulous group of gifted musicians performing at the Julian Library and sharing their gift of music with our community. This free concert will be in the main room of the library and refreshments will follow. Come for the music, stay for the wonderful fellowship. The Julian Library is located at 1850 Highway 78, next to the high school. For more information, please contact the branch at 780-765-0370.