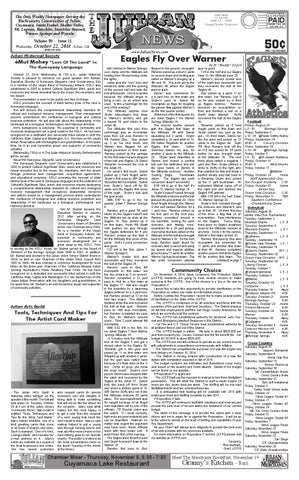 “Love Of The Land” In The Kumeyaay Language

Tools, Techniques And Tips For The Artist Card Maker

The Julian Art’s Guild is featuring Mary Morgan as the speaker of the month. The talk will take place on Tuesday, October 28 at 6 pm at the Julian Library Community Room. Mary’s talk is entitled “Tools, Techniques and Tips for the Artist Card Maker.” Mary makes beautiful, one of a kind greeting cards that come in all kinds of shapes and sizes. Each is stamped, “One of a Kind, Lovingly Made” and includes her e-mail address on it. Mary’s cards are available at a couple of the local businesses and online. She has repeat customers

who request cards for special occasions and she delights in being able to make something that will not be like the others for the occasion. Mary says what makes her the most happy, is to get a note from the recipient of a card, saying how much the card meant to them. Mary’s card making helped to put a young lady through nursing school and now, all of the money made on her card making goes to her favorite charity. The public is invited to all Art Guild presentations herld on the fourth Tuesday of the month at the library.

Eagles Fly Over Warner Mid October in Warner Springs; cool, damp and the Wildcats are hosting their Homecoming under the lights. Julian won the “coin” toss and elected to defer until the opening of the second half and take the kick at that point. Coin is in quotes because the officials forgot to bring a coin, so an eraser was used. Is this a harbinger for the rest of the evening? The Wildcats returner took Skyler Marushige’s kick deep in Warner’s territory and got a decent 50 yard return to the Julian 40. The Wildcats first play from scrimmage was an incomplete pass from QB Jose Ramirez to RB Frankie Diaz. Diaz picked up 3 on his next touch and Warner was flagged for an illegal procedure on third down. Ramirez picked up the yardage for the first down but was stripped of the ball and Eagles LB Daniel Streamer recovered the rock at the Julian 30. On Julian’s first touch, Daniel picked up 2 hard fought yards. Skyler’s first pass to WR Dennis Beresford fell incomplete. Daniel took Skyler’s hand off for 68 yards and the Eagles first score of the night. Skyler’s kick split the goal posts. With 8:47 to go in the 1st quarter, Julian 7, Warner Springs 0. Ramirez got a great 68 yard return on the Eagles kickoff and the Wildcats set up shop at the Eagles 16. Diaz picked up 6 on first down, Frosh RB Wyatt Holt pushed his way through the Eagles defenders for 6 and Ramirez picked up the final 8 for the Wildcats first score of the game. Holt’s 2 point conversion was good. 7:37 left in the first, Julian 7, Warner Springs 8. Warner’s onside kick was successful and they recovered the ball at the Eagles 36. Ramirez’ pass to Diaz fell incomplete on first down, but the duo picked up 5 on second. Ramirez completed a 12 yard pass to Holt for a first down at the Eagles 17. Holt was caught in the backfield by a swarming Eagles defense for a 3 yard loss, but Ramirez picked up 12 on his next two snaps. The Wildcats fumbled at the five and recovered the ball at that spot. Ramirez pass to Holt was incomplete, but Ramirez completed his pass to Diaz for Warner’s second score. Their 2 point attempt fell incomplete. With 5:02 left in the first, it’s my Julian Eagles 7, their Warner Springs Wildcats 14. JJ Corrales took the Wildcats kick at the Eagles 5 and got a decent return to the Eagles 39. Streamer got it into gear and picked up 11 on first down and followed up with another 3 yards, but the gain was called back because of a false start on the O line. Come on guys, you know the snap count! Skyler’s next pass to Dennis was dropped after the catch and recovered by the Eagles at the Julian 37. Daniel took the hand off form Skyler and arced a wobbly spiral to Sr. WR Darren Duffy who ran it into the Wildcats endzone 63 yards away. The accomplishment was for naught because of an illegal man downfield call by one of the officials. TE Shuuluk Linton was the culprit. If I recall correctly, tight ends are pass recipients and can be downfield. However, no matter how cogent the argument may have been, these officials stuck with their blown call. It wasn’t their first of the evening. The Eagles were forced to punt and Skyler boomed it down to the Warner 25. Ramirez first pass to Diaz

flopped to the ground, uncaught. Ramirez picked up a short 2 yards on second down and holding was called on Warner’s bringing up a 4th and 19. The punt got to the Wildcats’ 40, where the Eagles went to work. Darren was hammered for a 4 yard loss on first down and Skyler’s pass to Daniel fell incomplete as flags for roughing the passer flew against Warner’s as the first quarter ended. At the end of the first quarter it’s our Julian Eagles 7, the Warner Springs Wildcats 14. The second quarter opened with the Eagles first down at the Wildcats’ 49 with Daniel squeaking out 2 yards. Skyler completed a 10 yard pitch to Sr. RB Kellen Regalado for another Eagles first down. Kellen Sherman tanked his way for another 4 yards to the Wildcats 33. Skyler went downfield to Dennis and looped a perfect ball over the defenders and into the open hands of Dennis in the Wildcats endzone. Another Soaring Eagle. Touchdown Julian. The Eagles two point conversion wasn’t successful. 9:56 left to go in the half, it’s Julian 13, Warner Springs 14 Skyler’s kickoff roared through the Wildcats endzone and the ball was put into play at their 20. Chris Boyd fought through the Warner O line and sacked Ramirez for a 1 yard loss. Ramirez picked up his lost yard on the next play. Ramirez scrambled around in his backfield, looking for open receivers and finding none, scrambled for a 24 yard pickup. A personal foul was called on the Wildcats and the ball was brought back to Warner’s 29. On the next snap, Ramirez again found his receivers well covered and using his speed and evasive abilities wove his way 71 yards for another Warner Springs touchdown. The two point conversion attempt

was no good. 7:34 in the half and our Eagles have 13, the Wildcats have 20. Warner’s second onside kick of the night was successful and they recovered the ball at the Eagles 43. Diaz picked up a quick 11 on first down, but Ramirez lost 9 as he was sacked by a fired up Eagles defense. Ramirez launched an incompletion on third and fumbled a ball on a fourth down attempt. Duffy recovered the ball at the Eagles 10. Streamer picked up 8 hard fought yards on first down and Skyler picked one yard up the gut. On third down, Daniel ran like the wind and picked up 27 yards to the Eagles 49. Soph RB Nino Romano took off like an F18 and soared for 34 yards before he was brought down at the Wildcats’ 16. The next three plays netted a negative 1 yard and then Skyler pitched a strike to Duffy on the right, who then planted his feet and threw a perfect double play ball back to a streaking Skyler who picked up the 17 yard touchdown. An unblocked Wildcat came off of the right end and blocked the Eagles PAT attempt. With 1:36 left in the half, Julian 19, Warner Springs 20. Skyler’s kick rocketed through the endzone and Warner’s sets up at their 20. On their first play of the drive, a flag flew on an incompletion. Pass interference on the Eagles. Funny thing, there were no Eagles anywhere close to the Wildcats receiver at any time. Score 2 for the zebras. Warner’s first down at their 35. Ramirez first pass to Diaz was incomplete, but connected for 11 yards and another first down at their 46. Ramirez completed another pass to Holt at the Eagles 40 for another first down. The continued on page 7

On November 4, 2014 Julian Cuyamaca Fire Protection District (JCFPD) residents are going to have several choices to make exclusive to the JCFPD. One of the choices is a Yes or No vote on Proposition P. I would like to take this opportunity to provide clarification on the Proposition so voters can make an informative choice. Before I outline the Proposition I would like to make several points of clarification on the State of the JCFPD. - The JCFPD is comprised of an all-volunteer workforce with the exception of the part time Chief and Secretary. The District employs six full time employees to staff the San Diego County Ambulance, for which we currently hold the contract. - The JCFPD has jurisdictional authority for structural, auto, hazmat and Emergency Medical Response in the District. - Cal Fire and U.S. Forest Service have jurisdictional authority for all wildland fires in and out of the District. - The JCFPD budget is stable. We take in about $300,000 per year from property tax, County Contract and the fire benefit fee. Our budget for 2014/15 is about $300,000. - The JCFPD can and will continue to operate on our current income with adjustments in expenditures commensurate with inflation. - The District has completed the purchase of a new fire engine and took delivery on October 19, 2014. - The District is moving forward with construction of a new fire station with completion expected in fall of 2015. The budget numbers are estimates and fluctuations occur every year based on fire severity and Grant awards. Details of our budget can be found on our website. If Proposition P is approved: - The JCFPD will use the increase in revenue to hire three firefighter/ paramedics. This will allow the District to staff a medic engine 24 hours per day, seven days per week. The staffing will be one paid firefighter/medic and two volunteer/reserves. - It is anticipated that funding will be available late 2015 with employees hired and staffing complete by late 2015. If Proposition P fails: - The JCFPD will continue to staff with volunteers and reserves and provide the best level of service within the limitations of our current budget. The intent of this message is to provide the voters with a clear choice and not to argue for or against the Proposition. It will be up to the voters to decide on the level of staffing and capabilities of your Fire Department. As your Chief I will always work diligently to provide the best level of service possible with the resources available. For more information on Proposition P and the JCFPD please visit our website at JCFPD.com. Sincerely, Rick Marinelli, Chief, JCFPD