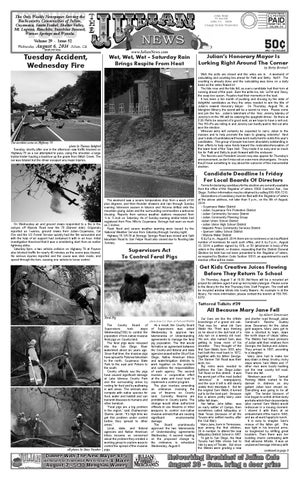 Julian’s Honorary Mayor Is Lurking Right Around The Corner

Well, the polls are closed and the votes are in. A weekend of calculating and counting lies ahead for Patti and Betty. Not!!! The counting is already done and the calculating was done on a daily basis as the votes flowed in! The tide rose and the tide fell, as every candidate had their turn at running ahead of the pack. Even the write-ins, Ms. LePet and Stacy, the soap-box queen, Peyakov had their moments in the lead. It has been a fun month of pushing and shoving by the slate of delightful candidates as they the votes needed to win the title of Julian’s newest Honorary Mayor. On Thursday, August 7th, at Menghini Winery, the secret will be a secret no more. Please come and join the fun. Julian’s Merchant of the Year, Jeremy Manley of Jeremy’s on the Hill, will be catering the spaghetti dinner. Be there at 5:30 PM to be assured of a good seat, as we hope to have a sell-out. The RSVPs are rolling in and Jeremy can hardly wait to find out who won the election. Whoever wins will certainly be expected to carry Julian to the masses and to help promote the town to glowing notoriety! Next year’s slate of candidates will have work really hard to outdo this year’s candidates. This group of people has been absolutely outstanding in their efforts to help raise funds toward the restoration/renovation of the lower level of the Town Hall. They made it so easy and so much fun for Patti and Betty to push forward with the endeavor. The floozies and President Lincoln may also appear for Thursday’s announcement, so don’t miss out on even more shenanigans. I’m sure they’ll have something to say about the outcome of this monumental election.

The accident scene on Highway 78

photo by Thomas Relaford Tuesday, shortly after one in the afternoon saw traffic blocked on Highway 78 as a car attempted to pass, using the shoulder, a large tractor-trailer hauling a backhoe up the grade from Witch Creek. The car was totaled but the driver escaped any major injuries.

Candidate Deadline Is Friday For Local Boards Of Directors

On Wednesday air and ground crews responded to a fire in the canyon off Wynola Road near the 78 (Banner side). Origiunaly reported as 1+acres, ground crews from Julian-Cuyamaca, Cal Fire and the US Forest Service quickly had the fire surounded and with the help of air support had contained it with in an hour. Initial investigation theorized that it was a smoldering start from an earlier lightning strike. Saturday 8pm, a two vehicle collision on Highway 78 at Payson also blocked traffic for nearly 40 minutes as the scene was cleared. No serious injuries reported and the cause was slick roads, and speed through the turn, causing one vehicle to loose control.

The weekend saw a severe temperature drop from a week of 90 plus degrees, and then thunder showers and rain through Sunday evening. Monsoon season in Mexico and Arizona drifted onto the mountain giving Julian and the surrounding communities a welcome dousing. Reports from various weather stations measured from ¼ to ½ inch on Saturday. As of Sunday evening similar totals had registered from Pine Hills to Cuyamaca. Borrego had seen as much as 2 inches. Flash flood and severe weather warning were issued by the National Weather Service from Saturday through Sunday night. Highway 78 SR-78 at Borrego Springs Road was closed and Split Mountain Road to San Felipe Road also closed due to flooding late Sunday.

Get Kids Creative Juices Flowing Before They Return To School On Thursday, August 7 at 10:30 AM there will be a recycled art project for children aged 4 and up led my Mary Morgan. Please come to the library for the first Thursday Kids Craft Program. The craft will be recycled window blinds into lovely flowers. An example is at the library. For more information, please contact the branch at 760-7650370.

all photos by Stacy Peyakov

The County Board of Supervisors took steps Wednesday(7/30) to control the population of non-native invasive feral pigs on County land. The feral pigs were released into the San Diego River watershed about six years ago. Since that time, the invasive pigs have spread to Palomar Mountain to the north, Cuyamaca State Park to the east and Potrero to the south. County officials say the pigs have caused significant damage at Lake Morena County Park and the surrounding areas by rooting for food and by wallowing in wet areas. The animals also compete with native species for food, water and habitat and can transmit diseases to humans and other livestock. “Feral pigs are a big problem in the region,” said Chairwoman Dianne Jacob. “It’s high time we get this problem under control before they spread to other areas.” Local, state, and federal agencies and Native American tribes became so concerned about the problem they created a working group to explore ways to control the spread of the invasive pigs.

photo from CA. Dept. of Fish and Wildlife

As a result, the County Board of Supervisors was asked Wednesday to approve two Memoranda of Understanding agreements to manage the feral pig population. The first would formalize an agreement between the County and federal and state agencies as well as the City of San Diego, Native American tribes and water/irrigation districts to work together on the problem and outlines the responsibilities of each agency. The second involves a cooperative effort at the state and local level to implement a control program. The plan involves amending an ordinance involving the use of firearms on County land. Currently, firearms are prohibited in County parks. The change would allow authorized officials to use firearms or other weapons to control non-native invasive animals that are causing significant environmental damage. The Board unanimously approved the two Memoranda of Understanding agreements Wednesday. A second reading on the proposed change to the ordinance is scheduled Wednesday, August 6.

Our lives are like the infinite branchings of a grand old oak. That may be what old Sam Webb the Third was thinking as he stood in the dull heat of a July sun on a weedy old road. His son, also named Sam, was getting to know more of his ancestor. They thought of the first Sam Webb, born 1853, who had built this road back in 1872, together with his father George. The Banner Toll Road was their work, too. Big rocks were needed to buttress the San Diego-Julian Toll Road on this stretch. It was the worst part of the road (called “atrocious” in newspapers), and the scar it left is still clearly visible from Interstate 8. But for the original Sam Webb, it turned out to be the best part. Because this is where pretty Mary Jane Miller fell down. Her father, John Miller, was an early settler of Campo, then sometimes called Milquatay or New Texas (because of all the Texans who settled nearby, after the Civil War). Mary Jane, born in Tennessee, was among the first children, 29 in number, to attend the new Milquatay District School in 1867. To get to San Diego, the New Texans had little choice but to ride by way of Tecate. But since the Webbs were grading a new

and shorter road through Julian Sandoval’s Rancho Guatay (now Descanso) for the Julian gold wagons, Mary Jane got to ride a shortcut to town, down the north slope of Viejas Valley. The Webbs had been pioneers of Julian with their relatives from Georgia, the Baileys and Julians. They arrived in 1867, according to a daughter. Mary Jane had to make her way down a steep, brushy, rocky slope where Sam Webb and 17 other men were busily hacking out the new county toll road. There she fell. Nineteen-year-old Samuel Fleming Webb rushed to the damsel in distress as any gallant Julian teen should do. Everything was going to be all right. The tender blossom of love began to unfold at that dusty worksite which their descendants (also named Sam Webb) would rediscover in a moving moment. I shared it with them at an embankment of the road in 1998, and we all went happily to lunch. It is easy to imagine Sam’s rescue of the fallen girl. She was light in his bronzed arms, so toughened by shifting great boulders. Then there was her budding charm contrasting with that abrasive hillside. It was an unplanned teenage intimacy with continued on page 3