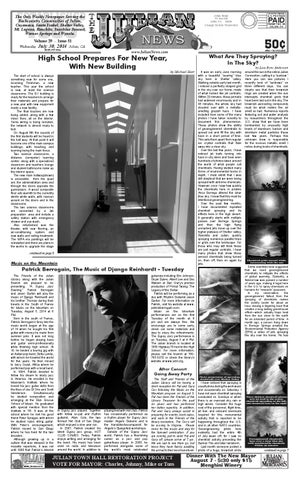 High School Prepares For New Year, With New Building The start of school is always something new for some one, incoming Freshman, a new teacher. This year the school is new, at least the science classrooms. The E-1 building is ready for the teachers to arrange their materials and prepare for a new year with new equipment inside a new facility. The final touches are now being added, along with a few minor fixes, all on the interior. Some wiring is being rerouted, the network is almost ready to test. On August 6th the sounds of the first students will be heard in the hall way. At that point it will become one of the main campus buildings, with teaching and learning being the main focus. Two science classrooms, a distance (computer) learning center, along with a specialized classroom and teachers lounge and student bathrooms make up the interior space. The new main hallway(shown) is accessible from the quad are, the administration area and through the doors opposite the gymnasium. A wood composite floor ads warmth to the currently sterile white walls, with maroon accent on the doors and in the classrooms. The two science classrooms are connected by a lab preparation area and include a safety station with emergency shower and eye wash. Also refurbished was the theater, with new flooring, an air-conditioning system and new walls and ceiling treatment. The WPA era paintings will be reinstalled and there are plans in the works to upgrade the stage

What Are They Spraying? In The Sky?

Music on the Mountain

It was an early June morning with a beautiful “soaring” blue sky here in Shelter Valley. Walking outside early last month, I noticed a perfectly shaped grid in the sky over our home, made of what looked like jet contrails. Within 20 minutes, these jet trails had widened enormously and in 45 minutes, the whole sky had clouded over with a metallicsmelling grayish haze. I have included here some of the many photos I have taken recently to document this phenomenon. These photos show the ability of geoengineered chemtrails to spread out and fill the sky with haze in a short period of time. This sets them apart from regular ice crystal contrails that fade away into a clear sky. Over the last few years, I have noticed jet trails turning into haze in city skies and have seen hundreds of photos taken around the world of what people call chemtrails. Having studied many forms of environmental toxins in depth, I must admit that I was still skeptical that we were being sprayed with airborne chemicals. However, once I saw how quickly the chemtrails here in pristine Anza Borrego altered the clear blue sky, I knew that this must be intentional geoengineering. Over the past few months, I have documented repeated chemtrail spraying and its effects here in the high desert. It generally starts with multiple passes over Borrego Springs and then the high flying unmarked jets move up over the higher plateaus of Shelter Valley, Ranchita and Julian, quickly spraying numerous parallel lines or grids over the landscape. For those who may still think these are just regular contrails, I have many photos that show these aerosol chemtrails being turned on, then off, then on again by jets.

Patrick Berrogain, The Music of Django Reinhardt - Tuesday The Friends of the Julian Library along with the Julian Branch are pleased to be presenting, “A Gypsy Jazz Evening.” Patrick Berrogain and Jason Durbin will play the music of Django Reinhardt and his brother Thomas during their travels in the South of France for Music on the Mountain on Tuesday, August 5, 2014 at 6 PM. Born in the south of France, Patrick Berrogain's foray into the music world began at the age of 14 when he bought his first guitar with money he made from summer jobs. It was not long before he began playing bass and guitar semi-professionally while finishing high school. At 19, he landed a touring gig with an Italian pop band, Delta Landa, with whom he traveled the world for five years. He then moved to Ivory Coast, Africa where he performed pop with a local band. In 1984, Patrick decided to follow his dream to study jazz in America. He enrolled in the Musician's Institute where he honed his jazz guitar skills from the likes of Joe Di'Orio and Scott Henderson. Simultaneously he studied composition and arranging at the Dick Groove School of Music. He graduated with special mention from the Institute in '85. It was at the school where he met his good friend Peter Sprague, with whom he studied nylon string guitar. With Peter's encouragement, Patrick moved to San Diego where he has lived for the two decades. Although growing up in a culture that was steeped in the musette repertoire, it was not until 1998 that Patrick's interest

guitarists including Eric Johnson, Doyle Dykes, Albert Lee and Doc Watson at Dan Crary's premier production of Primal Twang: The Legacy of the Guitar. Patrick will be performing as a duo with Rhythm Guitarist Jason Durbin. For more information on Patrick, visit his website at www. patrickberrogain.com. Music on the Mountain performances are on the first Tuesday of the month at 6 pm and are always free. We encourage you to come early, check out some materials and stay to enjoy the refreshments. The Gypsy Jazz performance is on Tuesday, August 5 at 6 PM. The Julian branch is located at 1850 Highway 78 next to the High School. For more information, please call the branch at 760765-0370 or check the library’s website at www.sdcl.org.

around the sun in the online Julian Connection, calling it a “sunbow.” Here you can see pictures I recently took of “sunbows” on three different days. You can clearly see that their brownish rings are created when the sun intercepts chemtrail grids that have been laid out in the sky. The brownish aerosoling compounds must be what makes the air smell so bad. Numerous reports featuring soil and water analysis by researchers throughout the U.S. show that we have been bombarded by unusually high levels of aluminum, barium and strontium metal particles these last few years. Perhaps this unknown brew is responsible for the noxious metallic smell I notice during bouts of chemtrails.

Some scientists have suggested that we need geoengineered chemtrails to mitigate the effects of global warming. Evidently, a federal law was passed a number of years ago, making it legal here in the U.S. to spray chemicals on humans for “research” purposes. In my observation, the geoengineered fallout from the spraying of chemtrails makes the vicinity cooler for about an hour, leaving a lingering haze that creates a long lasting greenhouse effect—which actually traps heat from the sun close to the earth for an extended period of time. A month ago, a person living down in Borrego Springs emailed the Environmental Protection Agency

(EPA) a video of jets spraying the sky over his home. He has

After Concert Going Away Party

in Gypsy jazz piqued. Together with fellow ex-pat and rhythm guitarist, Alain Cola, the two formed Hot Club of San Diego which enjoyed a nine year run. In 2007, Patrick created his latest Gypsy jazz group, HOT CLUB COMBO. Today, Patrick enjoys writing and arranging for the band. His music has been used on radio and television around the world. In addition to

playing lead with Hot Club, Patrick has occasionally performed as a rhythm player for Gypsy Jazz master Angelo Debarre and is the translator/accompanist for Angelo's Djangofest workshops. Outside of the Gypsy Jazz world, Patrick has a flourishing career as a jazz and pop guitar/bass player. In 2006, he performed alongside some of the world's most celebrated

The Staff and Friends of the Julian Library will be having a short reception for Pat and Gary Cox following the Music on the Mountain program on August 5. Pat has been the Friends of the Library Treasurer for the past six years and has performed her duties superbly. In addition, Pat and Gary always assist in preparing for events, book sales, and work in the Friends of the library bookstore. The Cox’s will be moving to Virginia. Please come for the music and stay for the farewell celebration. If you are coming just to send Pat and Gary off, please arrive at 7 pm. We are sad to see them go, but know they have family awaiting the arrival to their new hometown.

I have noticed that spraying is usually done during the work week and occasionally on Saturday. I have not seen chemtrail spraying conducted on Sundays or when there is an overcast sky, rain or high winds. Consider the huge cost of the personnel, flight time, jet fuel, and onboard chemicals required for this monumental activity that is reported to be happening throughout the U.S. and in all other NATO countries. Geoengineering pilots here evidently had the entire 4th of July week off, for I saw no chemtrail activity preceding the Banner Fire and later rainstorm. Last month someone posted a photo of a huge, brownish circle