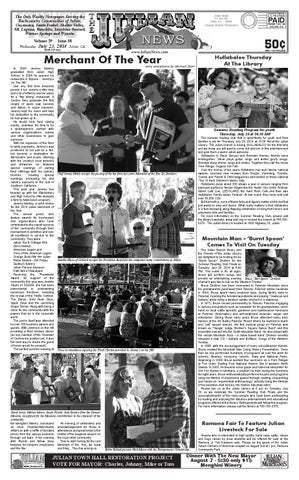 Merchant Of The Year In 2005 Jeremy Manley graduated from Julian High School, in 2008 he opened his restaurant in Wynola - “Jeremy’s On The Hill.” Like any first time business person it too Jeremy a little time and a lot of effort to see his vision for a “fine dining” restaurant. A Cordon Bleu graduate, the first couple of years saw success and failure in equal measure, Jeremy kept his vision and kept his dedication to the community he had grown up in. He would host fund raising events, volunteer his time to be a spokesperson, partner with various organizations, events and other businesses to gain exposure. With the explosion of the farm to table popularity, Jeremy’s was positioned to not just be a fad, but become a destination for flat-landers and locals. Working with the county’s local wineries and breweries he featured special evenings of pairing their offerings with his culinary touches. Creating special evenings, increasing his and Julian’s exposure to the rest of Southern California. This past year Jeremy has teamed up with the Elementary and High School to offer students a farm to table lunch program. Jeremy Manley, a solid choice for the 2014 Julian Merchant of the Year. The annual picnic also feature awards for businesses and organizations who have contributed to the overall success of the community through their involvement in activities and over all excellence in service to the community. They were: Julian Tea & Cottage Arts Don’s Market American Legion and Sons of the American Legion Orange Book/We Are Julian Robin Boland - Girl Friday Dudley’s Bakery Julian Pioneer Museum Patti Bell of Rabobank Receiving the “Presidents Award” for support of the community this year was Juanita Hayes of SDG&E, she has been instrumental in underwriting numerous functions, including the revival of the Fiddle Contest, The Dance, Gold Rush Days, Apple Days and the upcoming Grape Stomp. Along with being a voice for the community with the powers that be in the corporate world. The picnic itself was attended by over 100 business owners and guests. With Jeremy’s on the Hill providing a fried chicken dinner (as one member of the Chamber of Commerce pointed out, it was the best way to insure the guest of honor would be present). The perfect summer evening at

story and photos by Michael Hart

Hullabaloo Thursday At The Library

Summer Reading Program for youth Thursday, July 24 at 10:30 AM

The summer reading club that is specifically for youth and their families is set for Thursday, July 24, 2014 at 10:30 AM at the Julian Library. The Julian branch is having HULLABALOO for the first time and we know you will want to come out and join in this entertainment and give them a warm Julian welcome. Hullabaloo is Steve Denyes and Brendan Kremer, friends since kindergarten. Steve plays guitar, sings and writes goofy songs. Brendan plays drums, sings and smiles. Together they call the music Free-Range, Organic Kid-Folk. Over the course of ten years Hullabaloo has won twelve national awards, received rave reviews from People, Parenting, Parents, Cookie and Parent & Child Magazines and landed on three national “Top 10 Best Children’s Music” lists. Hullabaloo plays about 300 shows a year in venues ranging from backyard parties to fancier stages like the Austin City Limits Festival, World Café Live, LEGOLAND, the Hard Rock Cafe and their own Hullabaloo Family Music Festival. At last count, they have sold just over 30,000 CDs. But the truth is, none of these facts and figures matter a bit to kid that just wants to sing and dance. What really matters is that Hullabaloo is a foot-stomping, wing-flapping celebration of song that honors and entertains kids and families. For more information on the Summer Reading Club, please visit the library’s website, www.sdcl.org or contact the branch at 760-7650370. The Julian library is located at 1850 Highway 78, Julian.

Mountain Man - ‘Burnt Spoon’ Comes To Visit On Tuesday The Julian Branch library and the Friends of the Julian Library are delighted to be hosting Bruce “Burnt Spoon” Druliner for the Summer Reading Club Finale on Tuesday, July 29, 2014 at 6:00 PM. This event is for all ages. Bruce will perform songs and provide an entertaining evening Bruce “Burt Spoon” Druliner of what it was like to live on the Western Frontier. Bruce Druliner has been connected to Palomar Mountain since his grandparents purchased their Rancho Palomar adobe hacienda in 1954. Bruce spent many boyhood days, during family visits to Palomar, roaming the forested woodlands and playing "Cowboys and Indians" while riding a western saddle cinched to a sawhorse. In 1972, Bruce moved permanently to Rancho Palomar engaging in various occupations such as caretaker for his grandparents, ranch hand on local cattle spreads, gardener and maintenance mechanic at Palomar Observatory and self-employed musician, singer and entertainer. During those early years Bruce attended many barn dances at the old Bailey Palomar Resort where he learned to teach and "call" square dances. His first musical group on Palomar was known as "Hangin' Judge Druliner's Square Dance Band" and this ensemble evolved into the Smith Mountain Band. He also played with the Volcan Mountain Boys – a Julian based band. Druliner recently released a new CD – Ballads and Buffalos: Songs of the Western Frontier. In 1986, with the encouragement of many schoolteacher friends, Bruce created the Mountain Man Living History Presentation. Since then he has performed hundreds of programs all over the west for schools, libraries, museums, resorts, State and National Parks. Beginning in 2000 Bruce worked four summers as a Park Ranger at Fort Union Trading Post National Historic Site in western North Dakota. In 2005, he became a tour guide and historical interpreter for Old Fort Benton in Montana, a position he held during the summers for eight years. Bruce enthusiastically performs his jobs and programs using his lifetime of experience gained through reading, researching and hands-on "experiential anthropology" actually living the lifestyle of his buckskin-clad heroes, the historic Mountain Men! Please join us at the Julian Library at 6 pm on Tuesday, July 29, as we celebrate the Summer Reading Club Finale and the accomplishments of the many people who have been participating by reading and enjoying the fabulous entertainment and educational programs offered at the library. Refreshments will follow the program. For more information, please call the library at 760-765-0370.

Those in attendance enjoying the Fried Chicken provided by Jeremy’s on the Hill.

David Lewis, Marion Moore, Susan Fowler, Jean Resetco from the Pioneer Museum, recognized for the Museums contributions to the character of the community. the Menghini Winery concluded An evening of celebration and as most Chamber/Merchants acknowledgement for those in affairs do with a raffle of donated attendance and great break in the prizes from the various business middle of the toughest season on through out town. A fun evening the local retail community. Time to start looking for the next with friends and fellow shop keepers, Inn Keepers, employees Merchant of the Year, we know one thing... They live among us. and the like.

Anyone who is interested in high quality, hand raise cattle, sheep and hogs raised by local students will be offered for sale at the Ramona Jr. Fair livestock sale. Please be the guest of the Julian Future Farmers of American chapter on August 2nd at 1 pm, Ramona Community Park.