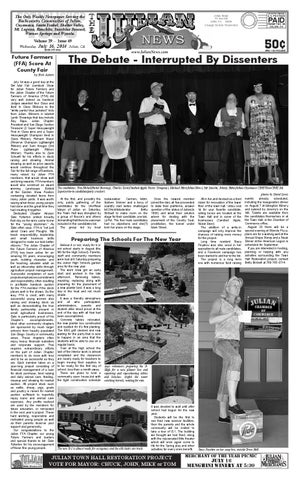 The Debate - Interrupted By Dissenters

July 1st was a good day at the Del Mar Fair Livestock Show for Julian Future Farmers and the Julian Chapter of the Future Farmers of America (FFA) did vary well indeed as livestock Judges awarded four Class and Best In Class Ribbons to the "white pants/ blue jacketed" kids from Julian. Winners in Market Lamb Showings that day include Ray Rapu, Julian Chapter President and San Diego Section Treasurer (2 Super Heavyweight First In Class wins and a Super Heavyweight Champion Best In Class Ribbon), Richard Braun (Reserve Champion Lightweight Ribbon) and Sam Krieger (3rd Place Lightweight Ribbon Winner). Thanks also to Zack Schuett for his efforts in stock raising and showing. Animal showing as well as prize awards would continue throughout the Fair for the full range of livestock, many raised by Julian FFA members, that would show well and bring rewards. FFA members would also construct an award winning Landscape Exhibit at the Garden Show Pavilion containing donated items from many Julian yards. It was worth seeing what these young people had done and the great time they had creating it together. Dedicated Chapter Advisor Dale Fullerton smiled broadly that day as the wins came home for the "young stockmen." As Dale often says, FFA is "not just about Cows and Ploughs. We teach responsibility, leadership and small business skills designed to make our kids better citizens." The Julian Chapter of the Future Farmers of America (FFA) has been active for an amazing 56 years, encouraging youth, building character and the teaching valuable adult as well as citizenship skills through agriculture project management. Successful completion of such projects emphasizes commitment and responsibility, often resulting in profitable livestock auction for the FFA member if the stock places well in the shows. By the way, FFA is coed, with many successful young women also raising and showing stock as well as demonstrating the true family partnership present in small agricultural businesses, Dale is particularly proud of his Chapter's accomplishments. Most other community chapters are sponsored by much larger schools from heavily populated San Diego County or community areas. These chapters often enjoy heavy financial subsidies and corporate support. This requires extraordinary efforts on the part of Julian Chapter members to do more with less and to be as successful as they are. Each member takes on a year-long project consisting of fmancial management of a loan for stock purchase, fund raising and daily animal care, feeding, cleanup and showing for market auction. All project stock such as cattle, sheep, pigs, goats and poultry is raised for market auction sufficient to hopefully repay loans and animal care expenses. Any profits realized are used by the members for future education, or reinvested in the next year's project. These hard working, responsible and motivated young people as well as their parents deserve your support and generosity. Our congratulations to the Julian FFA Chapter, our young Future Farmers and leaders and special thanks to Mr. Dale Fullerton for his encouragement of these fine young people.

The candidates: Tom Nickel(Nickel Brewing), Charles Scott(Candied Apple Pastry Company), Michael Hart(Julian News), Mr Lincoln, Johnny Hake(Julian-Cuyamaca CERT/TeenCERT, Ms. Lepet(write-in candidate/party crasher) photos by David Lewis already scheduled, All in fun and devised as a fund events Carmen, Mdm. Once the newest member At the first, and possibly the restaurateur only, public gathering of the Barbee Skinner and a bevy of joined the dais, all five proceeded raiser for renovation of the lower including the inauguration dinner candidates for the Unofficial scantily clad ladies challenged to state their platforms, answer floor of the town hall. Votes cost on August 7 at Menghini Winery Betty question of the status of Julian(in 1¢ for your favorite candidate, and catered by Jeremy’s on the Mayor of Julian on Saturday, MC/Host/Moderator the Town Hall was disrupted by Birdsell to make room on the 1890) and what their solution voting boxes are located at the Hill, Tickets are available from a group of floozie’s and others stage for their candidate, one Ms. where for dealing with the Town Hall and in some of the the candidates themselves or at demanding that there be a woman LéPet. The four male candidates placement of the County Seat, businesses (Candied Apple, the Town Hall, in the Chamber of Commerce office. had no objections and she(?) prostitution, the tunnel under Nickel Beer). included in the candidates list. August 20 there will be a The addition of a write-in Main Street. The group led by local took her place on the stage. campaign will only improve the special evening at Wynola Pizza, chances of raising more money plans are for a wishing well at the Annual Grape Stomp and a Steak for the project. Long time resident Stacy Dinner at the American Legion is Peyakov was also vocal in her scheduled for September. Believe it or not, ready for it or If you are interested in hosting, opposition to all male candidates, not school starts in August (the and a Facebook campaign has planning or helping with any 6th for the High School). Parents, been started to add her to the list. activities surrounding the Town staff and community members The project is a long term Hall Restoration project, contact were had at it Saturday preparing one with numerous fund raising Betty Birdsell at 760-765-0714. the Junior High Schools garden area for the new year. The work crew got an early start and worked in the late afternoon. Removing tables, repairing, replacing along with preparing for the placement of a new planter bed. It was a long day in the heat and not much shade. It was a friendly atmosphere and all who participated, administrators, parents and student alike stood proud at the end of the day with all that had been accomplished. Concrete tables relocated, the new planter box constructed and readied for it’s first planting. The BBQ grill cleaned and now waiting for the party that is sure to happen in an area that the students will be able to use on a regular basis. Over at the high school the last of the interior work is almost completed and the classroom are nearly ready for teachers to begin moving their supplies in to be ready for the first day of (top) volunteers preparing the Jr. school, less than a month away. High for a new planter box and There are plans to hold a repairing and repositioning tables community open house,but with and benches. (right) the water the tight construction schedule catching barrels, waiting for rain.

Preparing The Schools For The New Year

The new E-1 is almost ready for occupancy and the old chairs are trash.

it was decided to wait until after school had begun for the new year. Students will be the first to see their new science facilities, then the parents and the whole community will be invited to take a tour of E-1. The building we thought we had fixed, along with the rejuvenated little theater which will once again come to life for the Spring play and other activities for every ones benefit.

Stacy Peyakov on her soap box, outside Town Hall