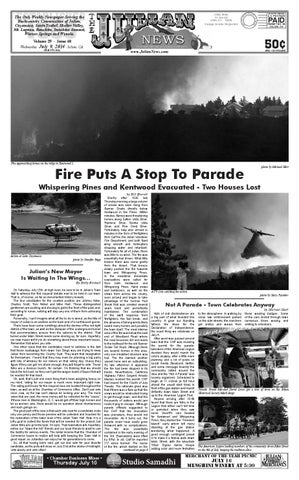 Fire approaching homes on the ridge in Kentwood 1,

Julian’s New Mayor Is Waiting In The Wings…

On Saturday, July 12th, at high noon, be sure to be in Julian’s Town Hall to witness the first mayoral debate ever to be held in our town. That is, of course, as far as documented history reveals. The four candidates for the coveted position are Johnny Hake, Charles Scott, Tom Nickel and Mike Hart. These distinguished gentlemen are pushing and shoving to get to the front of the pack and, according to rumor, nothing will stop any one of them from achieving their goal. Personally, I can’t imagine what all the to-do is about, as the title of mayor of Julian is as useless as the back end of a northbound goose. There have been some rumblings about the demise of the red-light district of the town, as well as the disrepair of the underground tunnel that accommodates access from the saloons to the district. That tunnel under Main Street needs some shoring up, for sure. Hopefully, our new mayor will try to do something about these important issues. Remember that when you vote. One other issue that the candidates need to address is the fact that those scallywags from down San Diego way are trying to keep Julian from becoming the County Seat. They want that designation for themselves. I heard that they may even be planning a big party with lots of whiskey for our miners on that voting day. Guess they figure if they can get ‘em drunk enough, they will forget to vote. Those folks are a devious bunch, for certain. I’m thinking that we should block the toll road, so they can’t get the wagon loads of liquor that will be needed for that deed. Oh, well, that’s just one more thing that’s been weighing heavy on my mind. Voting for our mayor is much more important right now. The voting poll boxes for the mayoral race are located throughout the town, as well as at the Chamber of Commerce office. Don’t just vote once, now, as the law can’t always be looking your way. The more votes that are cast, the more money will be collected for the “cause”. If those men in Washington, D. C. would get off their high horses and let us women vote, there would be no question about drunkenness and such goings-on. The good part of the race is that each vote cast for a candidate costs only one penny and those pennies will be collected and hoarded for the restoration of the lower level of the Julian Town Hall. Now, it is a lofty goal to collect the funds that will be needed for the project, but Julian folks are up to the task, I’m sure. That restoration will, hopefully, entice our “down-the-hill” friends and our local friends to want to use the facility for various events. The rental income that the Chamber of Commerce hopes to realize will help with keeping the Town Hall in good repair, so Julianites can enjoy her for generations to come. So, all that having been said, get out and vote for your favorite candidate, as the polls will close on July 31st at the stroke of midnight. Vote wisely and vote often!

Shortly after 1030 last Thursday morning a large column of smoke was seen rising from Banner Grade directly below Kentwood in the Pines. Within minutes, flames were threatening homes along Salton Vista Drive, Ramona Drive, Bonita Vista Drive, and Pine Crest Drive. Fortunately, help also arrived in minutes in the form of firefighters from CalFire, the Julian Volunteer Fire Department, and both fixed wing aircraft and helicopters dropping water and retardant. Fortunately for all of Julian, there was little to no wind. The fire was essentially fuel driven. What little breeze there was came gently from the desert. That breeze slowly pushed the fire towards town and Whispering Pines. In the meantime immediate evacuations were called for from both Kentwood and Whispering Pines. Hand crews and bulldozers, as well as fire crews from across the county, soon arrived and began to take advantage of the Sunrise Fuel Break that was created several years back and periodically maintained. The combination of the swift response from firefighters, the fuel break, and the absence of strong winds likely saved many homes and possibly the town itself. The most intense area of the fire was below the east end of Woodland Road where the road becomes dirt and leads to the trailhead for the old Banner Grade Toll Road. Although there are several homes in this area, only one inhabited structure was lost. The fire claimed another vacant hone and an outbuilding. By late afternoon it appeared the fire had been stopped in its tracks. Nevertheless, California Highway Patrol Sargent Amado Macias revoked the permit CHP had issued for the Fourth of July Parade. The rationale given was that if there was a flare up that fire crews would be obstructed trying to get through town, and that the thousands of visitors would jam roads trying to escape. Although parade officials suggested to the CHP that the revocation was premature, they would not reconsider. As it turns out, the parade could have easily gone foreword with no complications. The fire was essentially contained in the early evening of the 3rd. Evacuations were lifted by 8PM. In all, CalFire reported 217 acres burned. The cause of the fire, which started on the continued on page 3

A TV crew catching the action

Not A Parade - Town Celebrates Anyway Acts of civil disobedience are a big part of what founded this country. A gave our founding fathers the ideas for the Declaration of Independence, the exact thing we celebrate on July 4. After word was passed around town that the CHP was revoking the permit for the parade. Members of the American Legion decided they would march the colors anyway, after a little more planning and a lot of posts on social media (facebook, twitter, and some message boards) the community rallied around the idea and the “Not A Parade” was loosely organized. Scheduled to begin at 11 o’clock (a full hour ahead the usuall start time) in front of the gas station and march defiantly down Main Street and up to the American Legion Post. Anyone arriving after 10:40 found that there are folks in the Legion that either can’t tell time or panicked when they saw some Sheriff’s cars headed for Kentwood and Whispering Pines, they started the “Freedom March” early which left many standing at the gas station wondering what happened. A good enough contingent joined in to make it a festive walk down Main Street, with the Mountain Tribal Gypsy dance troupe adding color and more festivities

to the atmosphere. In walking by some law enforcement parked on the side streets, the marchers got smiles and waves from

those wearing badges. Some of the cars circled through town numerous times waving and smiling to onlookers.

The American Legion leading members of the community down Main Street on the 4th of July, keeping the tradition alive.