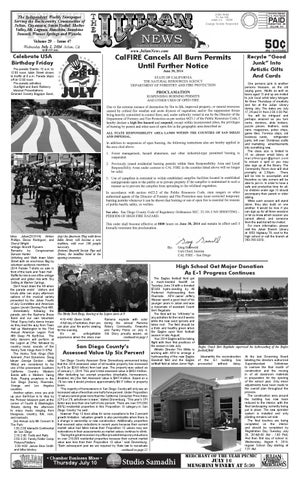 Miss Julian(2013/14) Amber Phillips, Eloisa Rodriguez, and Cheryl Wright Vintage Aircraft Flyovers Remarks by Congressman Duncan Hunter Unfurling and Walk down Main Street with an enormous flag by volunteer audience members 2014 Parade T-shirts on sale in front of the bank and Town Hall Raffle for ride in one of the vintage aircraft and glider ride with Sky Sailing at Warner Springs. Don’t head down the hill when the parade ends! Visitors and locals alike can enjoy afternoon options of the musical variety presented by the Julian Fourth of July Committee and American Legion Lincoln Deming Post 468. Immediately following the parade, join the Euphoria Brass Band and our own Mountain Tribal Gypsy belly dance troupe as they lead the way from Town Hall up Washington to the 73rd Annual American Legion Post 468 Deep Pit BarBQue. The belly dancers will perform at the Legion at 2PM, followed by country music sounds of the Honky Tonk Kings from 3~8PM. The Honky Tonk Kings (Rob Kennard ,Fred Dunsmore. Doug Meyer ,George Gordon , Mike Wiley) are considered to be one of the preeminent Southern California Country Western Bands with a Western Swing Style. Playing anywhere in the San Diego (home), Riverside, Orange and Los Angeles counties. Another option, once you pick up your BarBQue is to stop by the Pioneer Museum park at the corner of Fourth & Washington Streets during the afternoon to enjoy music ranging from bluegrass, country, folk, rock, and mariachi. 2nd Annual July 4th Concert In The Park: 1:30-2:00 Mariachi Continental de San Diego 2:10-2:40 Trails and Rails 2:50-3:20 Family Fiddle Camp Pickers/Fiddlers 3:30-4:00 Janice Bina-Smith and Mike Mosley

Recycle “Good Junk” Into Artistic Gifts And Cards One persons junk is another persons treasure, as the old saying goes. Adults as well as teens aged 13 and up are invited to join local artist Mary Morgan for three Thursdays of creativity and fun at the Julian Library during July. The dates are July 17, 24 and 31 from 2:30-3:30 PM. You will be intrigued and perhaps amazed as you turn corks, dominos, slide holders, puzzle pieces. feathers, soda cans, magazines, poker chips, game tiles, Formica chips, old business cards, refrigerator parts, left over Christmas crafts and marketing advertisements into something new. The class size is limited to 15 so please email Mary at mar y fmorgan@gmail.com to ensure a spot or you may also sign up at the library. The Community Room door will shut promptly at 2:30pm. There will be lots to accomplish and therefore no late comers will be able to join in. In order to have a safe and productive time for all, no children under age 13 should accompany their parent or older sibling. While each session will stand alone, they also build on one another. It would be nice if you can sign up for all three sessions or let us know which session you cannot attend, and someone from the wait-list will be invited. For more information, please visit the Julian Branch Library at 1850 Highway 78, next to the high school or call the branch at 760-765-0370.

(top) the American Flag walk down Main Street, will become a new tradition, with over 100 people necessary. (bottom) Emerald Society Pipe and Drums, the headline band at the opening ceremonies.

The Honky Tonk Kings, dancing at the Legion starts at 3 4:10-4:40 Glenn Smith A full day of activities, then you can plan your fire works viewing for the evening. It’s an unforgettable experience when the skies over

San Diego County’s Assessed Value Up Six Percent San Diego County Assessor Ernie Dronenburg announced today that the 2014 assessed value of all taxable property has increased by 6% (or $24.6 billion) from last year. The property was valued as of January 1, 2014. This year’s total assessed value is $433.4 billion. After deducting tax exempt properties (charitable, homeowners, disabled, etc.) the Net Assessed Value is $417.4 billion. Based on a 1% tax rate it would produce approximately $4.17 billion in property taxes. “The majority of homeowners in San Diego County will only see an increased value of less than one half of one percent. Under Proposition 13 values cannot grow more than the California Consumer Price Index (CPI) or 2%, whichever is lower,” stated Dronenburg. “This year’s CPI factor was less than one half of one percent. There are over 575,000 (68%) residential properties in this Proposition 13 category in San Diego County,” he said. However Prop 13 does allow for some exceptions to the 2 percent growth limitation. Valuation growth is also permissible when there is a change in ownership or new construction. Additionally, properties that received value reductions in recent years because their current market value had fallen below their Proposition 13 values may see restorations in their assessments as market values continue to climb. “During the great recession my office provided temporary reductions on over 210,000 residential properties because their current market value was less than their Proposition 13 value.” said Dronenburg. “Each subsequent year we are required by State law to reevaluate continued on page 12

The Eagles football field got a much-needed facelift on Tuesday, June 24 with a donated $7,000 hydro-seeding by All Preferred Hydroseeding from Riverside. APH owner Jeffery Weaver spent a good deal of his younger years in Julian and was a classmate of assistant Coach Bert Regalado. The field will be “off-limits” to any activities for the next 6 weeks while the new seed sprouts and takes root. The field should be a thick and healthy green when the Eagles open their football season in late August. Your 2014 Eagles will be taking flight with their first practices of the season in late July. Athletic Director Tim White is working with APH to arrange a hydroseeding of the new Eagles Baseball field and the Eagles softball field at Julian Junior High.

Eagles Coach Bert Regalado supervised the hydroseeding of the Eagles football field Meanwhile the reconstruction of the E-1 building has proceeded without delay.

At the last Governing Board Meeting the directors authorized Superintendant Schlotman to oversee the final month of construction and the moving in of all classroom materials in preparation for the opening of the school year. Only minor adjustments have been made to the overall plan throughout the process. The construction area around the building has now been reduced to the interior, with the final landscaping currently being put in place. The new sprinkler system is installed and only planting remains out side. The final touches are being completed on the interior and should be completed by Registration Day -Tuesday, July 29, 2014(9:00 AM - 1:00 PM). And then first day of school is: Wednesday, August 6, 2014, regular School Day starting at 7:37 AM.