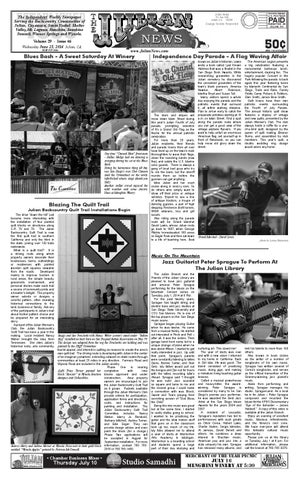 One time “Canned Heat” front-man - Dallas Hodge had em dancing a swinging during his set at the Blues Bash. Doing his harmonica thing all day was San Diego’s own Chet Cannon (and the Committee) on the newly refurbished winery stage (thank you SAL) Another stellar crowd enjoyed the mild weather and some electric blues at Menghini Winery

The stars and stripes will move down Main Street during this year’s Julian Fourth of July parade, prompting selection of It’s a Grand Old Flag as the theme for the annual patriotic celebration. For more than 20 years, Julian residents, their friends and parade lovers from all over have lined up on the town’s main thoroughfare to wave their flags, cheer the marching bands (now five), and salute the U.S. Marine color guards. There is always a gang of local bad guys who try to rob the bank, but the sheriff rounds them up before the gunmen can get anything. Miss Julian and her court cruise along in snazzy cars. So do others who simply want to show off their prize or antique vehicles. Expect to see a line of antique tractors, a troupe of dancing gypsies, a pair of high stepping Percheron draft horses, WWII veterans, boy and girl scouts. Also riding along the parade route will be Grand Marshal David Lewis, whose Julian roots go back to 1887, when George Ritchie homesteaded 160 acres on Eagle Peak and then sat down to a life of teaching here. Best

known as Julian’s historian, Lewis wrote a book called Last Known Address that was a finalist in the San Diego Book Awards. While researching gravesites in the Julian cemetery he discovered the unmarked gravesites of the town’s black pioneers: America Newton, Albert Robinson, Martha Boyd and Susan Tull. Many visitors spend a whole day enjoying the parade and the patriotic events that surround it…all within walking distance. Plan to arrive early to catch the preparade activities starting at 10 a.m. on Main Street. Find a spot along the parade route where you can get a good view of the vintage airplane flyovers. If you want to help unfurl an enormous American flag, set yourself up in front of Rabobank, so you can help move old glory down the street.

The American Legion presents a big celebration featuring a monumental barbecue lunch, entertainment, daylong fun. The hugely popular Concert in the Park following the parade is back again this year featuring tunes by Mariachi Continental de San Diego, Trails and Rails, Family Fiddle Camp Pickers & Fiddlers, Glen Smith, Janice Bina-Smith. Quilt lovers have their own patriotic events surrounding the Fourth of July Parade. The annual historic quilt show features a display of vintage and new quilts, presented by the Julian Woman’s Club. The club always holds a raffle for a oneof-a-kind quilt, designed by the queen of quilt making Eleanor Burns, and assembled by club members. This year’s quilt, a double wedding ring design would adorn any home.

Jazz Guitarist Peter Sprague To Perform At The Julian Library

Buggs and Sue Ponchetti with Nancy Weber (center) stand under “Indian Rug” installed on their barn on San Pasqual Indian Reservation on Hwy 79. The design was adapted from the rug the Ponchettis are holding and was painted by the JBQT Committee. tourist appeal, and interest in quilting as reasons to create the area’s own quilt trail. The driving route is developing with Julian in the center of an imaginary pinwheel, extending outward on state routes through communities at least 25 miles in any direction. Farmers Road and Wynola Road are included in the Julian vicinity. Phase One is nearing (Left) Tracy Turner painted her completion with nine block “Rooster” at Wynola Junction blocks approved and under Antiques and Collectibles. construction. Area property owners are encouraged to join the Julian Backcountry Quilt Trail as it grows. Packets available through the Julian Woman’s Club provide criteria for participation, application forms and directions, costs, and instructions for painting and installation. The Julian Backcountry Quilt Trail Committee includes Nancy Weber, Merry Jo Rembold, Barbara Mitchell, Audrey Turner, and Edie Seger. They can provide design advice and even paint the block (for a charge.) Phase Two applications will be accepted in August for September installation. For more Below) Harry and Sabine Horner at Wynola Pizza next to their quilt block information, contact 760 7652818 or 760 765-1450. entitled “Wynola Apples” painted by Patricia McConnell.

The drive “down the hill” just became more interesting with the installation of four painted quilt blocks on structures along S.R. 78 and 79. The Julian Backcountry Quilt Trail is now the first quilt trail in southern California and only the third in the state, joining over 130 trails nationwide. What is a quilt trail? It is a driving route along which property owners decorate their businesses, barns, outbuildings or residences with painted wooden quilt squares viewable from the roads. Developed mainly to improve tourism in rural areas, the simple beauty, grassroots involvement, and personal stories make each trail a source of community pride and a traveler’s delight. The property owner selects or designs a colorful pattern, often revealing historical connections to the land, business or family. Ask any of the participants in Julian’s trail about his/her pattern choice and be prepared for an interesting story. A project of the Julian Woman’s Club, the Julian Backcountry Quilt Trail has been a year in the making. Local resident Nancy Weber brought the idea from Tennessee. She cites Julian’s historical roots, arts community,

The Julian Branch and the Friends of the Julian Library are pleased to have jazz guitarist and virtuoso Peter Sprague performing for the Music on the Mountain Concert series on Tuesday, July 1, 2014 at 6 PM. For the past twenty years, Sprague has taught string and electric bass and jazz studies at San Diego State University and CSU San Marcos. He is one of the top players on the San Diego music scene. Sprague began playing Guitar when he was twelve. He came from a musical family. He started out interested in Rock and Roll – after all, it was the sixties. Then garage band boot camp led to a unique change of plans when he was about fifteen. I started to get really interested in jazz. Up until that point, Sprague’s parents were constantly listening to Miles Davis, Bennie Carter, and Stan Getz. My father would pull out the bongos and Zen out for hours with the Miles recording Mile’s Ahead. Sprague said “I thought he was nuts! Jazz sounded so square and tame to me and the closest group I could make a connection with was Blood, Sweat and Tears playing their scorching version of “God Bless the Child”. Being this into music was great but at the same time, I started to really dislike going to school. I wanted to be practicing the guitar and the slow motion stuff that goes on in the classroom took up too much of my life. My folks allowed me to attend a year of study at Interlochen Arts Academy in Michigan. Interlochen is a boarding school and students spend a large part of their day studying and

nurturing art. This saved me! The year of study was over and with a new vision I returned to my home in California. Back in Del Mar, life was good. The blend consisted of practicing music, doing gigs, and making a miniature living teaching guitar lessons. Called a musical powerhouse and heavy-hitter, the awardwinning Peter Sprague is considered by many to be San Diego’s premier jazz performer, he was awarded the Best Jazz Artist at the San Diego Music Awards for the years 2004 and 2007. A resident of Leucadia, Sprague’s reputation has led to performances with such greats as Chick Corea, Hubert Laws, Charlie Haden, Sergio Mendes, Al Jarreau, David Benoit and others. He combines a deep interest in Brazilian music, American pop and jazz into a style uniquely his own. Sprague has released many albums, and

lent his talents to more than 100 others. Also known in book circles as the writer of a number of songbooks of his own music, Sprague has written several of Corea’s songbooks, and serves as the official transcriber of the Grammy-winning jazz pianist’s music. Aside from performing and writing, Sprague manages his studio, SpragueLand. As a local tie in for Julian – Peter Sprague composed and recorded the Music for the KPBS Documentary “Eye of the Beholder – James Hubbell.” A copy of this video is available at the Julian Branch. Enjoy an evening of excellent music, fabulous refreshments, and the library’s cool zone. We hope everyone will attend this fantastic cultural music opportunity. Please join us at the library on Tuesday, July 1 at 6 pm. For additional information, please call the branch at 760-765-0370.