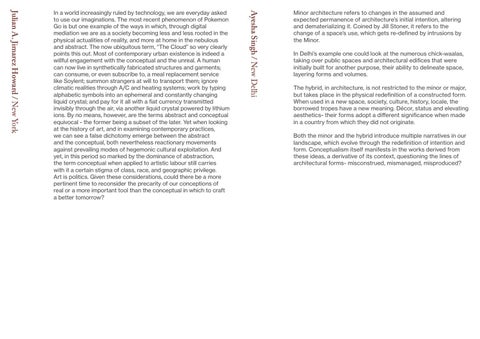 In a world increasingly ruled by technology, we are everyday asked to use our imaginations. The most recent phenomenon of Pokemon Go is but one example of the ways in which, through digital mediation we are as a society becoming less and less rooted in the physical actualities of reality, and more at home in the nebulous and abstract. The now ubiquitous term, “The Cloud” so very clearly points this out. Most of contemporary urban existence is indeed a willful engagement with the conceptual and the unreal. A human can now live in synthetically fabricated structures and garments; can consume, or even subscribe to, a meal replacement service like Soylent; summon strangers at will to transport them; ignore climatic realities through A/C and heating systems; work by typing alphabetic symbols into an ephemeral and constantly changing liquid crystal; and pay for it all with a fiat currency transmitted invisibly through the air, via another liquid crystal powered by lithium ions. By no means, however, are the terms abstract and conceptual equivocal - the former being a subset of the later. Yet when looking at the history of art, and in examining contemporary practices, we can see a false dichotomy emerge between the abstract and the conceptual, both nevertheless reactionary movements against prevailing modes of hegemonic cultural exploitation. And yet, in this period so marked by the dominance of abstraction, the term conceptual when applied to artistic labour still carries with it a certain stigma of class, race, and geographic privilege. Art is politics. Given these considerations, could there be a more pertinent time to reconsider the precarity of our conceptions of real or a more important tool than the conceptual in which to craft a better tomorrow?

Minor architecture refers to changes in the assumed and expected permanence of architecture’s initial intention, altering and dematerializing it. Coined by Jill Stoner, it refers to the change of a space’s use, which gets re-defined by intrusions by the Minor. In Delhi’s example one could look at the numerous chick-waalas, taking over public spaces and architectural edifices that were initially built for another purpose, their ability to delineate space, layering forms and volumes. The hybrid, in architecture, is not restricted to the minor or major, but takes place in the physical redefinition of a constructed form. When used in a new space, society, culture, history, locale, the borrowed tropes have a new meaning. Décor, status and elevating aesthetics- their forms adopt a different significance when made in a country from which they did not originate. Both the minor and the hybrid introduce multiple narratives in our landscape, which evolve through the redefinition of intention and form. Conceptualism itself manifests in the works derived from these ideas, a derivative of its context, questioning the lines of architectural forms- misconstrued, mismanaged, misproduced? An Accompaniment to "As You Can See" at Exhibit320 New Delhi

An Accompaniment to "As You Can See" at Exhibit320 New Delhi