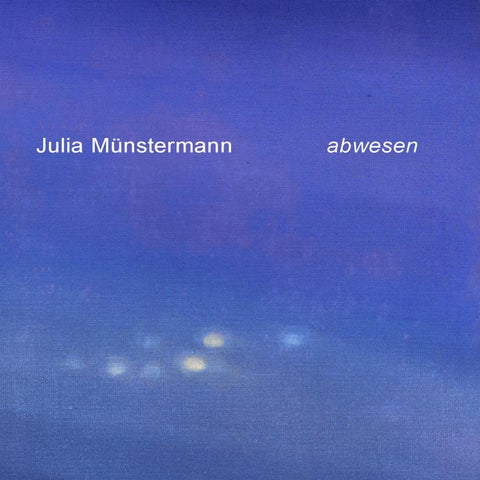 Abwesen Julia Münstermann has given the title Abwesen to a series of paintings she has worked on for the last two years. Multiple meanings could be given to this invented German word. First, it indicates that figurative elements are barely recognizable and virtually absent in the paintings. The word Abwesen can also literally refer to being absent or out of this world. These meanings have a direct link to her new paintings in which the eye of the spectator is guided into a vast space. Finally Abwesen refers to the absence of the human figure, a feature that is characteristic of most of her paintings. In her earlier paintings artificial light, architecture and urban scenes were recurring motifs. The work could be a facade, an interior or a crossing of two roads. In these paintings there is still a certain compositional structure with elements like crossing lines that function as coordinates within the plane of the picture. In the recent paintings these coordinates are relegated to the background. Here nearly completely abstract spaces are created and the focus is on the effect of artificial light, color, atmosphere and space. For example in Luft there is a gradual change from dark blue at the bottom of the picture to a soft violet-pink at the top of the small panel. The painting points to a diffuse evening light. As with other paintings, the image evolves from photos that Münstermann has taken herself. The painting is of course never a copy of such a photo. It is always an interpretation. In other recent paintings a horizon occasionally crosses the painting’s surface horizontally or, in other cases, is at an angle as if it is seen from a higher point of view hovering like in an airplane. The aerospace sometimes seems to be lit from an unclear source. It might be a light that comes from a city or its reverberation. In Abflug it is clear that a runway is being depicted because the strip has signaling lights on both sides. Other paintings like Transit, Babel and Siberia seem to evolve from photos taken from an airplane. In the end, however, the photo is not important as a form of representation but as a first step of abstraction of reality. For the spectator however the photographic source is not important. What is important is the way the spec-

tator is seduced and challenged to look more closely at the twilit scene: how does one relate an object with another, are there points of contact in this endless space, how are the graduations of color developed and what kind of structure does the surface of the painting have? Her earlier paintings feature artificial light that originates from fluorescent or neon lights or from lamp posts. These light sources, combined with the reflections on windows and pavements, create a dynamic image with unusual and bold color contrasts. She would use, for example, a sensual violet against a dark green or turquoise against dark brown. The artificial character of these late night scenes is furthermore accentuated by the mixture of interior and exterior and fore- and background. It is as if certain architectural forms are losing their bearings and become abstract elements crossing the image plane. In her recent paintings light and space are still important, but these aspects have been elaborated in another way. Münstermann is still using night light, but this time there is no traceable source. Sometimes there is a blue or violet space featuring a gradual shift in brightness. The points of light visible here and there seem to hover in an immeasurable space of primarily blue light. One of these phenomena which is called flare is well known within the photographic world and occurs if a light is reflected on the lens of a camera, creating a beam of light in the image whose source is not traceable. Münstermann gratefully uses these accidental phenomena. The lighter areas in her paintings are created by using a white paint or a lighter layer over the blue or violet background. These layers are thinly painted. As a result the relatively rough structure of the linen becomes visible. The effect is an even more diffuse light that is spread all over the canvas. The horizontal and vertical lines of the linen might also remind us of the lines that can be seen on a TV screen. The stratification, the subtle variegation in color and the elusive spatiality, create a liveliness that constantly attracts the eye of the spectator and forces us to look more closely and intensively. In the recent paintings the vanishing points of per-

spective or other coordinates that may give a certain structure to the composition are gone. The measurable distances between objects that might give a tangible relationship are almost oblivious. The only support that is given in some paintings is a vague indication of a horizon that might run at a certain angle through the image plane. These points of contact to reality are fragile and this spatiality is only indicated by color, particularly by the gradient of color. This play with the perception of reality is a recurrent element in Münstermann’s work. Her work is always within the realm of figuration and abstraction, and the recent paintings seem to tend more towards abstraction. The result is a triggering of the viewer’s own imagination without too many indications of reality. The photographic and filmed images from space ships or aircraft have provided us with a certain impression of the dimensions and color in space. Most of the striking images have reached us through the media. The argument has been made that people take photography or film as even more realistic than reality itself. The mediated image can sometimes suggest a closer or nearer presence by using telephoto lenses or framing and reworking reality with all kind of digitalized tools. Münstermann also constantly manipulates reality by distorting, reordering or adding, and this is exactly how she tries to keep us alert and challenge us to check our perception of reality. Intentionally or unintentionally Münstermann’s recent paintings evoke the tradition of romantic painting with their open spaces. When we look for example at the paintings of Caspar David Friedrich, the viewer is guided over the shoulders of a lonely spectator within the landscape, into an immense vastness, and is invited to experience the mythical forces that are inherent in nature. Although it is certainly not Münstermann’s intention to try to impose a mythical or religious experience, she does emphasize the atmospheric and evocative effect of color. A number of authors have already observed that some modern abstract painters like Barnett New-

man and Mark Rothko have tried to evoke the unfathomable power of nature in the tradition of the romantics (Note). In the case of Newman, this is associated with a commitment to religious themes in an abstract form, but Rothko is far more occupied with the serene and vast emptiness and the expressive power that is embodied within the color planes. Münstermann has adopted some of the formal strategies from abstract art, but she owes no particular obligation to any of the moral convictions of Modernism. The reduction of referents to reality, in particular, emphasizes aspects of light, color, texture or an imaginary space. In that way the paintings go beyond the formal aspects into an internal poetic that is derived from the effects and the combination of these aspects and culminates in a highly authentic language.