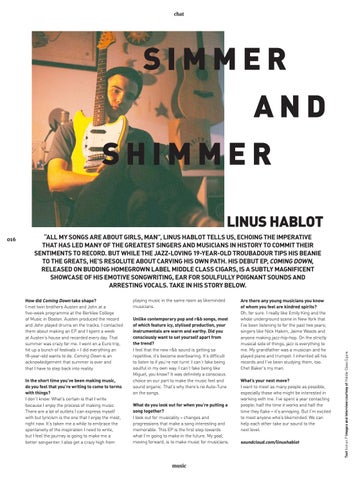 SIMMER AND SHIMMER LINUS HABLOT “ALL MY SONGS ARE ABOUT GIRLS, MAN”, LINUS HABLOT TELLS US, ECHOING THE IMPERATIVE THAT HAS LED MANY OF THE GREATEST SINGERS AND MUSICIANS IN HISTORY TO COMMIT THEIR SENTIMENTS TO RECORD. BUT WHILE THE JAZZ-LOVING 19-YEAR-OLD TROUBADOUR TIPS HIS BEANIE TO THE GREATS, HE’S RESOLUTE ABOUT CARVING HIS OWN PATH. HIS DEBUT EP, COMING DOWN, RELEASED ON BUDDING HOMEGROWN LABEL MIDDLE CLASS CIGARS, IS A SUBTLY MAGNIFICENT SHOWCASE OF HIS EMOTIVE SONGWRITING, EAR FOR SOULFULLY POIGNANT SOUNDS AND ARRESTING VOCALS. TAKE IN HIS STORY BELOW. How did Coming Down take shape? I met twin brothers Austen and John at a five-week programme at the Berklee College of Music in Boston. Austen produced the record and John played drums on the tracks. I contacted them about making an EP and I spent a week at Austen’s house and recorded every day. That summer was crazy for me. I went on a Euro trip, hit up a bunch of festivals – I did everything an 18-year-old wants to do. Coming Down is an acknowledgement that summer is over and that I have to step back into reality. In the short time you’ve been making music, do you feel that you’re writing to come to terms with things? I don’t know. What’s certain is that I write because I enjoy the process of making music. There are a lot of outlets I can express myself with but lyricism is the one that I enjoy the most, right now. It’s taken me a while to embrace the spontaneity of the inspiration I need to write, but I feel the journey is going to make me a better songwriter. I also get a crazy high from

playing music in the same room as likeminded musicians. Unlike contemporary pop and r&b songs, most of which feature icy, stylised production, your instrumentals are warm and earthy. Did you consciously want to set yourself apart from the trend? I feel that the new r&b sound is getting so repetitive, it’s become overbearing. It’s difficult to listen to if you’re not turnt. I can’t fake being soulful in my own way. I can’t fake being like Miguel, you know? It was definitely a conscious choice on our part to make the music feel and sound organic. That’s why there’s no Auto-Tune on the songs. What do you look out for when you’re putting a song together? I look out for musicality – changes and progressions that make a song interesting and memorable. This EP is the first step towards what I’m going to make in the future. My goal, moving forward, is to make music for musicians.

Are there any young musicians you know of whom you feel are kindred spirits? Oh, for sure. I really like Emily King and the whole underground scene in New York that I’ve been listening to for the past two years; singers like Nick Hakim, Jaime Woods and anyone making jazz-hip-hop. On the strictly musical side of things, jazz is everything to me. My grandfather was a musician and he played piano and trumpet. I inherited all his records and I’ve been studying them, too. Chet Baker’s my man. What’s your next move? I want to meet as many people as possible, especially those who might be interested in working with me. I’ve spent a year contacting people; half the time it works and half the time they flake – it’s annoying. But I’m excited to meet anyone who’s likeminded. We can help each other take our sound to the next level. 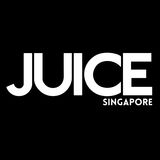 Jagwar Ma, You Me At Six, Luca Brasi and more.

Jagwar Ma, You Me At Six, Luca Brasi and more.