Jubilee Ace - What Is Bitcoin & Why Is Cryptocurrency So Popular? 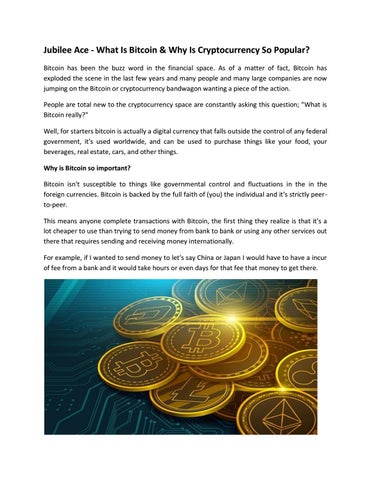 Jubilee Ace - What Is Bitcoin &amp; Why Is Cryptocurrency So Popular? Bitcoin has been the buzz word in the financial space. As of a matter of fact, Bitcoin has exploded the scene in the last few years and many people and many large companies are now jumping on the Bitcoin or cryptocurrency bandwagon wanting a piece of the action. People are total new to the cryptocurrency space are constantly asking this question; &quot;What is Bitcoin really?&quot; Well, for starters bitcoin is actually a digital currency that falls outside the control of any federal government, it&#39;s used worldwide, and can be used to purchase things like your food, your beverages, real estate, cars, and other things. Why is Bitcoin so important? Bitcoin isn&#39;t susceptible to things like governmental control and fluctuations in the in the foreign currencies. Bitcoin is backed by the full faith of (you) the individual and it&#39;s strictly peerto-peer. This means anyone complete transactions with Bitcoin, the first thing they realize is that it&#39;s a lot cheaper to use than trying to send money from bank to bank or using any other services out there that requires sending and receiving money internationally. For example, if I wanted to send money to let&#39;s say China or Japan I would have to have a incur of fee from a bank and it would take hours or even days for that fee that money to get there.

If I use Bitcoin, I can do it easily from my wallet or my cell phone or a computer instantaneously without any of those fees. If I wanted to send for example gold and silver it would require many guards it would take a lot of time and a lot of money to move bullion from point to point. Bitcoin can do it again with a touch of a finger. Why do people want to use Bitcoin? The main reason is because Bitcoin is the answer to these destabilized governments and situations where money is no longer as valuable it used to be. The money that we have now; the paper fiat currency that&#39;s in our wallets is worthless and a year from now it&#39;ll be worth even less. We&#39;ve even seeing major companies showing interest in the blockchain technology. A few weeks ago, a survey went out to a handful of Amazon customers whether or not they would be interested in using a cryptocurrency if Amazon creates one. The results from that showed that many were very interested. Starbucks even hinted about the use of a blockchain mobile app. Walmart has even applied for a patent on a &quot;smart package&quot; that will utilize the blockchain technology to track and authenticate packages.

Throughout our lifetime we&#39;ve seen many changes take place from the way we shop, the way we watch movies, the way we listen to music, read books, buy cars, look for homes, now how we spend money and banking. Cryptocurrency is here to stay. If you haven&#39;t already, it&#39;s time for anyone to fully study cryptocurrency and learn how to take full advantage of this trend that&#39;s going to continue to thrive throughout time.

Jubilee Ace - What Is Bitcoin & Why Is Cryptocurrency So Popular?

Bitcoin has been the buzz word in the financial space. As of a matter of fact, Bitcoin has exploded the scene in the last few years and many people and many large companies are now jumping on the Bitcoin or cryptocurrency bandwagon wanting a piece of the action. 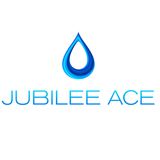