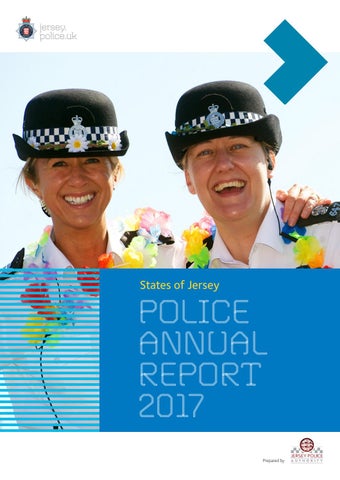 The Jersey Police Authority (JPA) has a statutory duty to provide a review of the manner in which the objectives of the Annual Policing Plan for 2017 have been addressed by the SOJP and the overall performance of the SOJP in general terms. 2017 was a year of significant transformation for all Officers and Staff, the most visual aspect of which was the successful phased move into the new Headquarters. I am delighted to report that despite the considerable logistical challenges, the transition went as planned and without affecting performance or public service. Throughout 2017, SOJP revised their core policies by adopting the principles of THRIVE, focusing on how they will respond and manage all demand for police services by assessing what the level of Threat, Harm or Risk is, and how they will Investigate, assess Vulnerability and Engage with the customer. This practice, as well as the continued focus on digital efficiencies reflect a more streamlined service focusing on the core priorities of protecting life whilst preventing and detecting crime, within the constraints of a decreasing budget. This yearâ&amp;#x20AC;&amp;#x2122;s Annual Report also reflects a change in presentation, whereby we have adopted a new style of reporting which we hope will be more engaging for the reader, whilst maintaining the formality of reporting important data. I hope you enjoy reading the annual report, and please note that further reporting information can be found on the States of Jersey Police Website.

2017 saw a change in the way resources were deployed by using the THRIVE principles. This assesses the Threat, Harm, Risk, Investigation opportunities, the Vulnerability of the victim and any opportunities for Engagement. This new approach involves a range of deployment options, including, issues being resolved over the telephone; via an appointment system with the most appropriate officer attending or a fast time immediate response. These principles are also now used to guide everything SOJP do including the allocation of investigations and daily tasking.

No. of hours in training

Image: Courtesy of the JEP

Under the revised States of Jersey Police Force Law 2012, an amendment was agreed by the States Assembly for the Jersey Police Authority (JPA) to provide an Independent Custody Visiting (ICV) service as a statutory requirement. The JPA is now responsible for making the necessary arrangements for the ICV service, including the appointment and training of independent custody visitors, planning arrangements for visiting detainees, and reporting on the conditions of detention. The JPA currently have 11 trained visitors who make unannounced visits to places of detention on a regular basis. There are two Jersey based trainers who can train the ICV team on Island. Various training occasions are conducted on a quarterly basis.

The new headquarters building has a purpose-built detention facility with up-to-date technology for recording and monitoring conditions of detainees, as well as having the facilities to provide them with on-site medical care, if required. There were no recorded areas of significant concern requiring intervention, however comments were regularly noted about the lack of food choice. Information about the ICV service can be found on the JPA website.

2017 is perhaps the first year that Jersey has truly seen the ever-increasing digital threat translate into significant crime and incident reporting for the States of Jersey Police. Increases in all areas, especially fraud reporting has been witnessed, the latter resulting in a fourfold rise with hundreds of thousands of pounds being lost to Islanders through a variety of means. The Force continues to develop its digital investigation capabilities throughout all aspects of its work and in particular to focus on the all-important PROTECT messaging to our community, both the general public and the Islands business community. The Force continues to promote the advice and guidance provided by GetSafeOnline.org and to work with as many partners as possible across this particular area of policing, for example the Jersey Fraud Prevention Forum and the States of Jersey Cyber Security Task Force.

The Community Officers worked across the Island engaging with Parishioners and many groups who represent our diverse communities. The Licensing Unit liaised with the Licensing Trade and other interested parties. The Road Safety and the Crime Reduction Officersâ&amp;#x20AC;&amp;#x2122; efforts were focussed on making our roads safer and reducing crime. The SoJP dog handlers who as well as being community officers, were regularly used for searches, also assisting the Customs and Immigration Service.

Vulnerable People No. of detentions under Place of Safety Legislation

No. of Missing Person reports

No. of unauthorised absence cases from residential care facilities

No. of child protection notifications

No. of adult protection notifications

In preparation for the publication of the Independent Jersey Care Inquiry in 2017 the Force received additional funding to strengthen its existing partnership working to protect and safeguard children through the Multiagency Safeguarding Hub. There was also funding to establish a new partnership with Health &amp; Social Services to deliver Jerseyâ&amp;#x20AC;&amp;#x2122;s Sexual Assault Referral Centre. The SARC provides a comprehensive and coordinated forensic, counselling and aftercare service to men, women and children living in Jersey who have experienced rape or sexual assault, whether this has happened recently or in the past. Anyone can use the services without making a report to the police or the SARC can support the individual if and when they want to speak to the police.

2017 saw the injection of additional funding into the Jersey Financial Crime Unit and the creation of an Economic Crime and Confiscation Unit within the Law Officers’ Department. Engagement and training with the City of London Police as the leading force nationally on economic crime has contributed to further refinement and improvement of investigative processes. The Financial Intelligence Unit saw an increase of 4% on 2016 in terms of overall submissions in the form of suspicious activity reports, requests for assistance and other miscellaneous reports – the highest levels to date. Work has commenced on the JFCU’s vital contribution to the National Risk Assessment which will be a critical feature leading up to the next international evaluation of the Island’s work in the Anti Money Laundering and Combating the Financing of Terrorism arenas.

No. of suspicious activity reports (SARs)

2017 saw the successful conclusion to two JFCU investigations into serious breaches of trust (one including the Royal British Legion) leading to over 3 years imprisonment. Significant progress was also made throughout the year on three other major investigations all of which are now scheduled for trials during 2018, with a number of charges having being brought against individuals covering fraudulent conversion, false pretence and false accounting offences as well as breaches of the Proceeds of Crime, Investors (Prevention of Fraud) and Financial Services Laws. Approximately twenty other investigations were also running at the year-end alongside the caseload of the newly formed Economic Crime and Confiscation Unit within the Law Officers’ Department, and partnership working with the Law Officers and the Jersey Financial Services Commission continues to move from strength to strength.

No. of licensing checks conducted on licensed premises No. of recorded cyber crime

No. of requests for assistance No. of actions against liscensed premises (inc. words of advice)

No. of misc information reports (MIR) 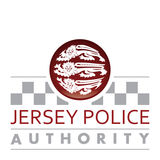