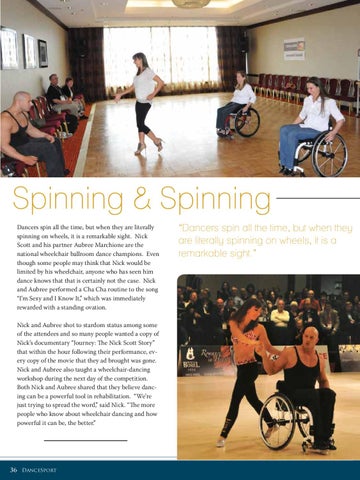 Spinning &amp; Spinning Dancers spin all the time, but when they are literally spinning on wheels, it is a remarkable sight. Nick Scott and his partner Aubree Marchione are the national wheelchair ballroom dance champions. Even though some people may think that Nick would be limited by his wheelchair, anyone who has seen him dance knows that that is certainly not the case. Nick and Aubree performed a Cha Cha routine to the song “I’m Sexy and I Know It,” which was immediately rewarded with a standing ovation. Nick and Aubree shot to stardom status among some of the attendees and so many people wanted a copy of Nick’s documentary “Journey: The Nick Scott Story” that within the hour following their performance, every copy of the movie that they ad brought was gone. Nick and Aubree also taught a wheelchair-dancing workshop during the next day of the competition. Both Nick and Aubree shared that they believe dancing can be a powerful tool in rehabilitation. “We’re just trying to spread the word,” said Nick. “The more people who know about wheelchair dancing and how powerful it can be, the better.”

“Dancers spin all the time, but when they are literally spinning on wheels, it is a remarkable sight.” 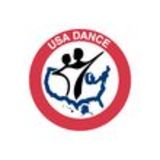