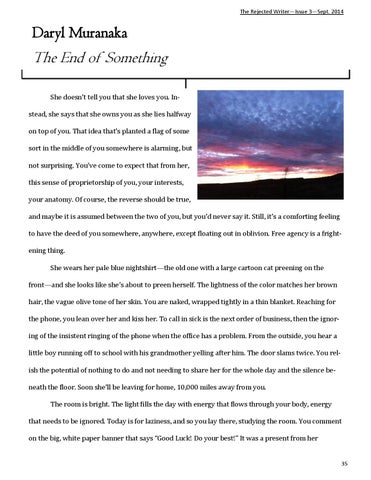 The End of Something She doesn’t tell you that she loves you. Instead, she says that she owns you as she lies halfway on top of you. That idea that’s planted a flag of some sort in the middle of you somewhere is alarming, but not surprising. You’ve come to expect that from her, this sense of proprietorship of you, your interests, your anatomy. Of course, the reverse should be true, and maybe it is assumed between the two of you, but you’d never say it. Still, it’s a comforting feeling to have the deed of you somewhere, anywhere, except floating out in oblivion. Free agency is a frightening thing. She wears her pale blue nightshirt—the old one with a large cartoon cat preening on the front—and she looks like she’s about to preen herself. The lightness of the color matches her brown hair, the vague olive tone of her skin. You are naked, wrapped tightly in a thin blanket. Reaching for the phone, you lean over her and kiss her. To call in sick is the next order of business, then the ignoring of the insistent ringing of the phone when the office has a problem. From the outside, you hear a little boy running off to school with his grandmother yelling after him. The door slams twice. You relish the potential of nothing to do and not needing to share her for the whole day and the silence beneath the floor. Soon she’ll be leaving for home, 10,000 miles away from you. The room is bright. The light fills the day with energy that flows through your body, energy that needs to be ignored. Today is for laziness, and so you lay there, studying the room. You comment on the big, white paper banner that says “Good Luck! Do your best!” It was a present from her