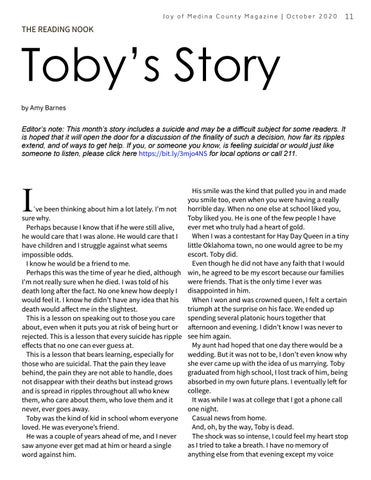 Editor’s note: This month’s story includes a suicide and may be a difficult subject for some readers. It is hoped that it will open the door for a discussion of the finality of such a decision, how far its ripples extend, and of ways to get help. If you, or someone you know, is feeling suicidal or would just like someone to listen, please click here https://bit.ly/3mjo4NS for local options or call 211.

His smile was the kind that pulled you in and made you smile too, even when you were having a really horrible day. When no one else at school liked you, ’ve been thinking about him a lot lately. I’m not Toby liked you. He is one of the few people I have sure why. ever met who truly had a heart of gold. Perhaps because I know that if he were still alive, When I was a contestant for Hay Day Queen in a tiny he would care that I was alone. He would care that I little Oklahoma town, no one would agree to be my have children and I struggle against what seems escort. Toby did. impossible odds. Even though he did not have any faith that I would I know he would be a friend to me. Perhaps this was the time of year he died, although win, he agreed to be my escort because our families were friends. That is the only time I ever was I’m not really sure when he died. I was told of his death long after the fact. No one knew how deeply I disappointed in him. When I won and was crowned queen, I felt a certain would feel it. I know he didn’t have any idea that his triumph at the surprise on his face. We ended up death would affect me in the slightest. spending several platonic hours together that This is a lesson on speaking out to those you care about, even when it puts you at risk of being hurt or afternoon and evening. I didn’t know I was never to rejected. This is a lesson that every suicide has ripple see him again. My aunt had hoped that one day there would be a effects that no one can ever guess at. wedding. But it was not to be, I don’t even know why This is a lesson that bears learning, especially for she ever came up with the idea of us marrying. Toby those who are suicidal. That the pain they leave graduated from high school, I lost track of him, being behind, the pain they are not able to handle, does absorbed in my own future plans. I eventually left for not disappear with their deaths but instead grows college. and is spread in ripples throughout all who knew It was while I was at college that I got a phone call them, who care about them, who love them and it one night. never, ever goes away. Casual news from home. Toby was the kind of kid in school whom everyone And, oh, by the way, Toby is dead. loved. He was everyone’s friend. The shock was so intense, I could feel my heart stop He was a couple of years ahead of me, and I never as I tried to take a breath. I have no memory of saw anyone ever get mad at him or heard a single anything else from that evening except my voice word against him.