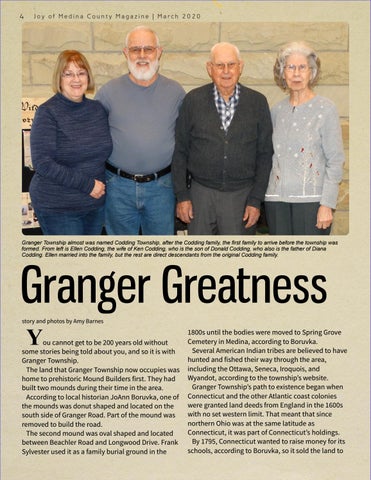 Granger Township almost was named Codding Township, after the Codding family, the first family to arrive before the township was formed. From left is Ellen Codding, the wife of Ken Codding, who is the son of Donald Codding, who also is the father of Diana Codding. Ellen married into the family, but the rest are direct descendants from the original Codding family.

ou cannot get to be 200 years old without some stories being told about you, and so it is with Granger Township. The land that Granger Township now occupies was home to prehistoric Mound Builders first. They had built two mounds during their time in the area. According to local historian JoAnn Boruvka, one of the mounds was donut shaped and located on the south side of Granger Road. Part of the mound was removed to build the road. The second mound was oval shaped and located between Beachler Road and Longwood Drive. Frank Sylvester used it as a family burial ground in the

1800s until the bodies were moved to Spring Grove Cemetery in Medina, according to Boruvka. Several American Indian tribes are believed to have hunted and fished their way through the area, including the Ottawa, Seneca, Iroquois, and Wyandot, according to the township’s website. Granger Township’s path to existence began when Connecticut and the other Atlantic coast colonies were granted land deeds from England in the 1600s with no set western limit. That meant that since northern Ohio was at the same latitude as Connecticut, it was part of Connecticut’s holdings. By 1795, Connecticut wanted to raise money for its schools, according to Boruvka, so it sold the land to