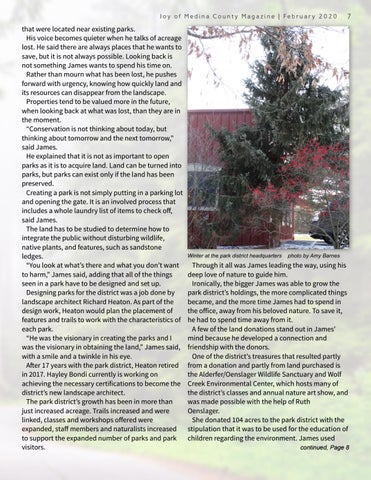 that were located near existing parks. His voice becomes quieter when he talks of acreage lost. He said there are always places that he wants to save, but it is not always possible. Looking back is not something James wants to spend his time on. Rather than mourn what has been lost, he pushes forward with urgency, knowing how quickly land and its resources can disappear from the landscape. Properties tend to be valued more in the future, when looking back at what was lost, than they are in the moment. “Conservation is not thinking about today, but thinking about tomorrow and the next tomorrow,” said James. He explained that it is not as important to open parks as it is to acquire land. Land can be turned into parks, but parks can exist only if the land has been preserved. Creating a park is not simply putting in a parking lot and opening the gate. It is an involved process that includes a whole laundry list of items to check off, said James. The land has to be studied to determine how to integrate the public without disturbing wildlife, native plants, and features, such as sandstone ledges. “You look at what’s there and what you don’t want to harm,” James said, adding that all of the things seen in a park have to be designed and set up. Designing parks for the district was a job done by landscape architect Richard Heaton. As part of the design work, Heaton would plan the placement of features and trails to work with the characteristics of each park. “He was the visionary in creating the parks and I was the visionary in obtaining the land,” James said, with a smile and a twinkle in his eye. After 17 years with the park district, Heaton retired in 2017. Hayley Bondi currently is working on achieving the necessary certifications to become the district’s new landscape architect. The park district’s growth has been in more than just increased acreage. Trails increased and were linked, classes and workshops offered were expanded, staff members and naturalists increased to support the expanded number of parks and park visitors.

Through it all was James leading the way, using his deep love of nature to guide him. Ironically, the bigger James was able to grow the park district’s holdings, the more complicated things became, and the more time James had to spend in the office, away from his beloved nature. To save it, he had to spend time away from it. A few of the land donations stand out in James’ mind because he developed a connection and friendship with the donors. One of the district’s treasures that resulted partly from a donation and partly from land purchased is the Alderfer/Oenslager Wildlife Sanctuary and Wolf Creek Environmental Center, which hosts many of the district’s classes and annual nature art show, and was made possible with the help of Ruth Oenslager. She donated 104 acres to the park district with the stipulation that it was to be used for the education of children regarding the environment. James used continued, Page 8