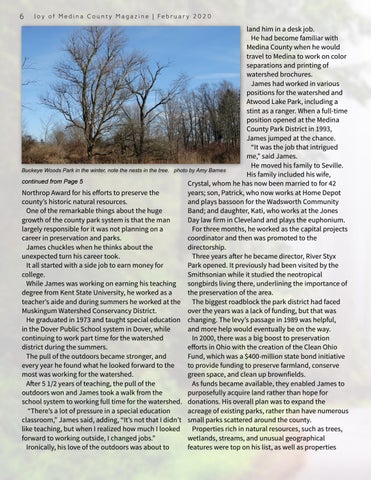 Northrop Award for his efforts to preserve the county’s historic natural resources. One of the remarkable things about the huge growth of the county park system is that the man largely responsible for it was not planning on a career in preservation and parks. James chuckles when he thinks about the unexpected turn his career took. It all started with a side job to earn money for college. While James was working on earning his teaching degree from Kent State University, he worked as a teacher’s aide and during summers he worked at the Muskingum Watershed Conservancy District. He graduated in 1973 and taught special education in the Dover Public School system in Dover, while continuing to work part time for the watershed district during the summers. The pull of the outdoors became stronger, and every year he found what he looked forward to the most was working for the watershed. After 5 1/2 years of teaching, the pull of the outdoors won and James took a walk from the school system to working full time for the watershed. “There’s a lot of pressure in a special education classroom,” James said, adding, “It’s not that I didn’t like teaching, but when I realized how much I looked forward to working outside, I changed jobs.” Ironically, his love of the outdoors was about to

land him in a desk job. He had become familiar with Medina County when he would travel to Medina to work on color separations and printing of watershed brochures. James had worked in various positions for the watershed and Atwood Lake Park, including a stint as a ranger. When a full-time position opened at the Medina County Park District in 1993, James jumped at the chance. “It was the job that intrigued me,” said James. He moved his family to Seville. His family included his wife, Crystal, whom he has now been married to for 42 years; son, Patrick, who now works at Home Depot and plays bassoon for the Wadsworth Community Band; and daughter, Kati, who works at the Jones Day law firm in Cleveland and plays the euphonium. For three months, he worked as the capital projects coordinator and then was promoted to the directorship. Three years after he became director, River Styx Park opened. It previously had been visited by the Smithsonian while it studied the neotropical songbirds living there, underlining the importance of the preservation of the area. The biggest roadblock the park district had faced over the years was a lack of funding, but that was changing. The levy’s passage in 1989 was helpful, and more help would eventually be on the way. In 2000, there was a big boost to preservation efforts in Ohio with the creation of the Clean Ohio Fund, which was a $400-million state bond initiative to provide funding to preserve farmland, conserve green space, and clean up brownfields. As funds became available, they enabled James to purposefully acquire land rather than hope for donations. His overall plan was to expand the acreage of existing parks, rather than have numerous small parks scattered around the county. Properties rich in natural resources, such as trees, wetlands, streams, and unusual geographical features were top on his list, as well as properties