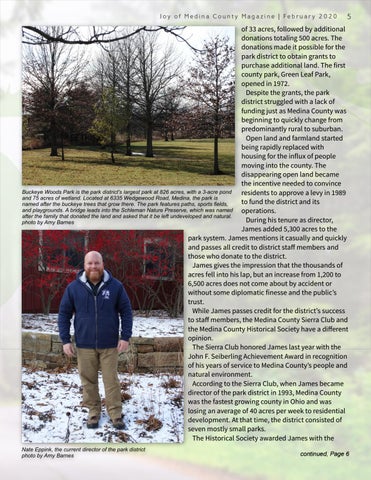 of 33 acres, followed by additional donations totaling 500 acres. The donations made it possible for the park district to obtain grants to purchase additional land. The first county park, Green Leaf Park, opened in 1972. Despite the grants, the park district struggled with a lack of funding just as Medina County was beginning to quickly change from predominantly rural to suburban. Open land and farmland started being rapidly replaced with housing for the influx of people moving into the county. The disappearing open land became the incentive needed to convince residents to approve a levy in 1989 to fund the district and its operations. During his tenure as director, James added 5,300 acres to the park system. James mentions it casually and quickly and passes all credit to district staff members and those who donate to the district. James gives the impression that the thousands of acres fell into his lap, but an increase from 1,200 to 6,500 acres does not come about by accident or without some diplomatic finesse and the publicâ&#x20AC;&#x2122;s trust. While James passes credit for the districtâ&#x20AC;&#x2122;s success to staff members, the Medina County Sierra Club and the Medina County Historical Society have a different opinion. The Sierra Club honored James last year with the John F. Seiberling Achievement Award in recognition of his years of service to Medina Countyâ&#x20AC;&#x2122;s people and natural environment. According to the Sierra Club, when James became director of the park district in 1993, Medina County was the fastest growing county in Ohio and was losing an average of 40 acres per week to residential development. At that time, the district consisted of seven mostly small parks. The Historical Society awarded James with the continued, Page 6