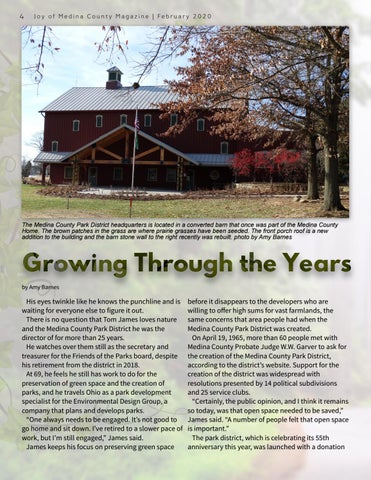 The Medina County Park District headquarters is located in a converted barn that once was part of the Medina County Home. The brown patches in the grass are where prairie grasses have been seeded. The front porch roof is a new addition to the building and the barn stone wall to the right recently was rebuilt. photo by Amy Barnes

Growing Through the Years by Amy Barnes

His eyes twinkle like he knows the punchline and is waiting for everyone else to figure it out. There is no question that Tom James loves nature and the Medina County Park District he was the director of for more than 25 years. He watches over them still as the secretary and treasurer for the Friends of the Parks board, despite his retirement from the district in 2018. At 69, he feels he still has work to do for the preservation of green space and the creation of parks, and he travels Ohio as a park development specialist for the Environmental Design Group, a company that plans and develops parks. “One always needs to be engaged. It’s not good to go home and sit down. I’ve retired to a slower pace of work, but I’m still engaged,” James said. James keeps his focus on preserving green space

before it disappears to the developers who are willing to offer high sums for vast farmlands, the same concerns that area people had when the Medina County Park District was created. On April 19, 1965, more than 60 people met with Medina County Probate Judge W.W. Garver to ask for the creation of the Medina County Park District, according to the district’s website. Support for the creation of the district was widespread with resolutions presented by 14 political subdivisions and 25 service clubs. “Certainly, the public opinion, and I think it remains so today, was that open space needed to be saved,” James said. “A number of people felt that open space is important.” The park district, which is celebrating its 55th anniversary this year, was launched with a donation