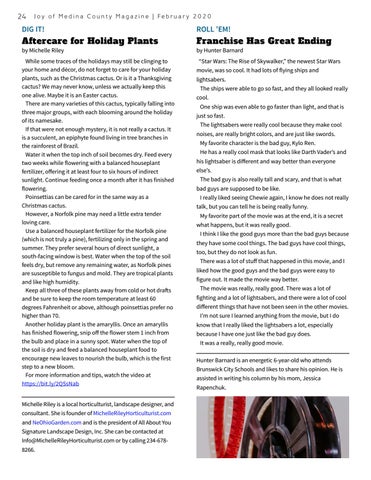 While some traces of the holidays may still be clinging to your home and décor, do not forget to care for your holiday plants, such as the Christmas cactus. Or is it a Thanksgiving cactus? We may never know, unless we actually keep this one alive. Maybe it is an Easter cactus. There are many varieties of this cactus, typically falling into three major groups, with each blooming around the holiday of its namesake. If that were not enough mystery, it is not really a cactus. It is a succulent, an epiphyte found living in tree branches in the rainforest of Brazil. Water it when the top inch of soil becomes dry. Feed every two weeks while flowering with a balanced houseplant fertilizer, offering it at least four to six hours of indirect sunlight. Continue feeding once a month after it has finished flowering. Poinsettias can be cared for in the same way as a Christmas cactus. However, a Norfolk pine may need a little extra tender loving care. Use a balanced houseplant fertilizer for the Norfolk pine (which is not truly a pine), fertilizing only in the spring and summer. They prefer several hours of direct sunlight, a south-facing window is best. Water when the top of the soil feels dry, but remove any remaining water, as Norfolk pines are susceptible to fungus and mold. They are tropical plants and like high humidity. Keep all three of these plants away from cold or hot drafts and be sure to keep the room temperature at least 60 degrees Fahrenheit or above, although poinsettias prefer no higher than 70. Another holiday plant is the amaryllis. Once an amaryllis has finished flowering, snip off the flower stem 1 inch from the bulb and place in a sunny spot. Water when the top of the soil is dry and feed a balanced houseplant food to encourage new leaves to nourish the bulb, which is the first step to a new bloom. For more information and tips, watch the video at https://bit.ly/2QSsNab

“Star Wars: The Rise of Skywalker,” the newest Star Wars movie, was so cool. It had lots of flying ships and lightsabers. The ships were able to go so fast, and they all looked really cool. One ship was even able to go faster than light, and that is just so fast. The lightsabers were really cool because they make cool noises, are really bright colors, and are just like swords. My favorite character is the bad guy, Kylo Ren. He has a really cool mask that looks like Darth Vader’s and his lightsaber is different and way better than everyone

else’s. The bad guy is also really tall and scary, and that is what bad guys are supposed to be like. I really liked seeing Chewie again, I know he does not really talk, but you can tell he is being really funny. My favorite part of the movie was at the end, it is a secret what happens, but it was really good. I think I like the good guys more than the bad guys because they have some cool things. The bad guys have cool things, too, but they do not look as fun. There was a lot of stuff that happened in this movie, and I liked how the good guys and the bad guys were easy to figure out. It made the movie way better. The movie was really, really good. There was a lot of fighting and a lot of lightsabers, and there were a lot of cool different things that have not been seen in the other movies. I’m not sure I learned anything from the movie, but I do know that I really liked the lightsabers a lot, especially because I have one just like the bad guy does. It was a really, really good movie. Hunter Barnard is an energetic 6-year-old who attends Brunswick City Schools and likes to share his opinion. He is assisted in writing his column by his mom, Jessica Rapenchuk.