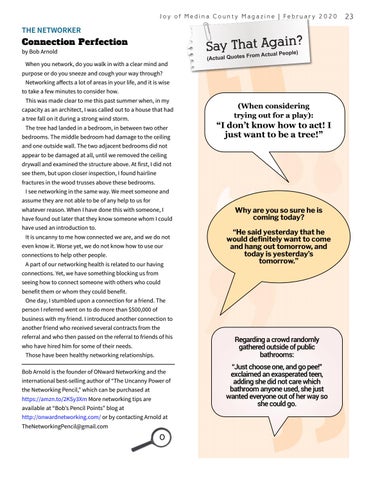 Connection Perfection by Bob Arnold When you network, do you walk in with a clear mind and purpose or do you sneeze and cough your way through? Networking affects a lot of areas in your life, and it is wise to take a few minutes to consider how. This was made clear to me this past summer when, in my capacity as an architect, I was called out to a house that had a tree fall on it during a strong wind storm. The tree had landed in a bedroom, in between two other bedrooms. The middle bedroom had damage to the ceiling and one outside wall. The two adjacent bedrooms did not appear to be damaged at all, until we removed the ceiling drywall and examined the structure above. At first, I did not see them, but upon closer inspection, I found hairline fractures in the wood trusses above these bedrooms. I see networking in the same way. We meet someone and assume they are not able to be of any help to us for whatever reason. When I have done this with someone, I have found out later that they know someone whom I could have used an introduction to. It is uncanny to me how connected we are, and we do not even know it. Worse yet, we do not know how to use our connections to help other people. A part of our networking health is related to our having connections. Yet, we have something blocking us from seeing how to connect someone with others who could benefit them or whom they could benefit. One day, I stumbled upon a connection for a friend. The person I referred went on to do more than $500,000 of business with my friend. I introduced another connection to another friend who received several contracts from the referral and who then passed on the referral to friends of his who have hired him for some of their needs. Those have been healthy networking relationships. Bob Arnold is the founder of ONward Networking and the international best-selling author of “The Uncanny Power of the Networking Pencil,” which can be purchased at https://amzn.to/2KSy3Xm More networking tips are available at “Bob’s Pencil Points” blog at http://onwardnetworking.com/ or by contacting Arnold at TheNetworkingPencil@gmail.com

(When considering trying out for a play):

Why are you so sure he is coming today? “He said yesterday that he would definitely want to come and hang out tomorrow, and today is yesterday’s tomorrow.”

Regarding a crowd randomly gathered outside of public bathrooms: “Just choose one, and go pee!” exclaimed an exasperated teen, adding she did not care which bathroom anyone used, she just wanted everyone out of her way so she could go.