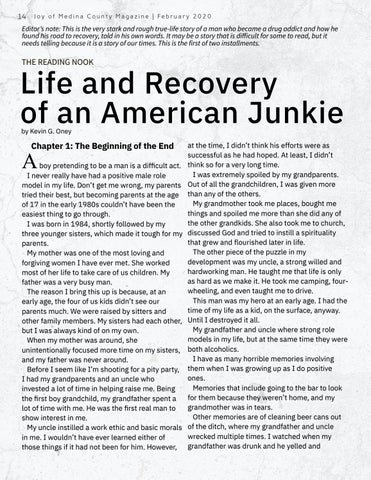 Editor’s note: This is the very stark and rough true-life story of a man who became a drug addict and how he found his road to recovery, told in his own words. It may be a story that is difficult for some to read, but it needs telling because it is a story of our times. This is the first of two installments.

Life and Recovery of an American Junkie by Kevin G. Oney

Chapter 1: The Beginning of the End

boy pretending to be a man is a difficult act. I never really have had a positive male role model in my life. Don’t get me wrong, my parents tried their best, but becoming parents at the age of 17 in the early 1980s couldn’t have been the easiest thing to go through. I was born in 1984, shortly followed by my three younger sisters, which made it tough for my parents. My mother was one of the most loving and forgiving women I have ever met. She worked most of her life to take care of us children. My father was a very busy man. The reason I bring this up is because, at an early age, the four of us kids didn’t see our parents much. We were raised by sitters and other family members. My sisters had each other, but I was always kind of on my own. When my mother was around, she unintentionally focused more time on my sisters, and my father was never around. Before I seem like I’m shooting for a pity party, I had my grandparents and an uncle who invested a lot of time in helping raise me. Being the first boy grandchild, my grandfather spent a lot of time with me. He was the first real man to show interest in me. My uncle instilled a work ethic and basic morals in me. I wouldn’t have ever learned either of those things if it had not been for him. However,

at the time, I didn’t think his efforts were as successful as he had hoped. At least, I didn’t think so for a very long time. I was extremely spoiled by my grandparents. Out of all the grandchildren, I was given more than any of the others. My grandmother took me places, bought me things and spoiled me more than she did any of the other grandkids. She also took me to church, discussed God and tried to instill a spirituality that grew and flourished later in life. The other piece of the puzzle in my development was my uncle, a strong willed and hardworking man. He taught me that life is only as hard as we make it. He took me camping, fourwheeling, and even taught me to drive. This man was my hero at an early age. I had the time of my life as a kid, on the surface, anyway. Until I destroyed it all. My grandfather and uncle where strong role models in my life, but at the same time they were both alcoholics. I have as many horrible memories involving them when I was growing up as I do positive ones. Memories that include going to the bar to look for them because they weren’t home, and my grandmother was in tears. Other memories are of cleaning beer cans out of the ditch, where my grandfather and uncle wrecked multiple times. I watched when my grandfather was drunk and he yelled and