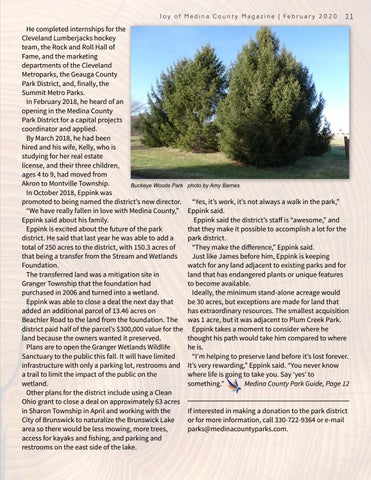 He completed internships for the Cleveland Lumberjacks hockey team, the Rock and Roll Hall of Fame, and the marketing departments of the Cleveland Metroparks, the Geauga County Park District, and, finally, the Summit Metro Parks. In February 2018, he heard of an opening in the Medina County Park District for a capital projects coordinator and applied. By March 2018, he had been hired and his wife, Kelly, who is studying for her real estate license, and their three children, ages 4 to 9, had moved from Akron to Montville Township. In October 2018, Eppink was promoted to being named the district’s new director. “We have really fallen in love with Medina County,” Eppink said about his family. Eppink is excited about the future of the park district. He said that last year he was able to add a total of 250 acres to the district, with 150.3 acres of that being a transfer from the Stream and Wetlands Foundation. The transferred land was a mitigation site in Granger Township that the foundation had purchased in 2006 and turned into a wetland. Eppink was able to close a deal the next day that added an additional parcel of 13.46 acres on Beachler Road to the land from the foundation. The district paid half of the parcel’s $300,000 value for the land because the owners wanted it preserved. Plans are to open the Granger Wetlands Wildlife Sanctuary to the public this fall. It will have limited infrastructure with only a parking lot, restrooms and a trail to limit the impact of the public on the wetland. Other plans for the district include using a Clean Ohio grant to close a deal on approximately 63 acres in Sharon Township in April and working with the City of Brunswick to naturalize the Brunswick Lake area so there would be less mowing, more trees, access for kayaks and fishing, and parking and restrooms on the east side of the lake.

“Yes, it’s work, it’s not always a walk in the park,” Eppink said. Eppink said the district’s staff is “awesome,” and that they make it possible to accomplish a lot for the park district. “They make the difference,” Eppink said. Just like James before him, Eppink is keeping watch for any land adjacent to existing parks and for land that has endangered plants or unique features to become available. Ideally, the minimum stand-alone acreage would be 30 acres, but exceptions are made for land that has extraordinary resources. The smallest acquisition was 1 acre, but it was adjacent to Plum Creek Park. Eppink takes a moment to consider where he thought his path would take him compared to where he is. “I’m helping to preserve land before it’s lost forever. It’s very rewarding,” Eppink said. “You never know where life is going to take you. Say ‘yes’ to something.” Medina County Park Guide, Page 12

If interested in making a donation to the park district or for more information, call 330-722-9364 or e-mail parks@medinacountyparks.com.