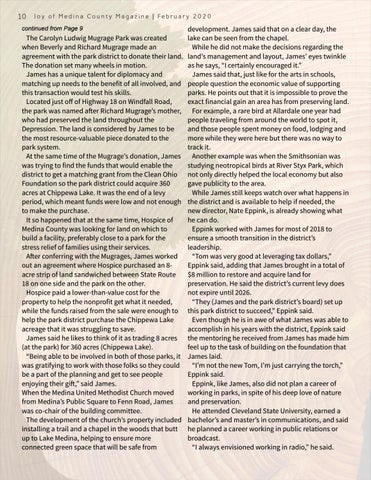 The Carolyn Ludwig Mugrage Park was created when Beverly and Richard Mugrage made an agreement with the park district to donate their land. The donation set many wheels in motion. James has a unique talent for diplomacy and matching up needs to the benefit of all involved, and this transaction would test his skills. Located just off of Highway 18 on Windfall Road, the park was named after Richard Mugrage’s mother, who had preserved the land throughout the Depression. The land is considered by James to be the most resource-valuable piece donated to the park system. At the same time of the Mugrage’s donation, James was trying to find the funds that would enable the district to get a matching grant from the Clean Ohio Foundation so the park district could acquire 360 acres at Chippewa Lake. It was the end of a levy period, which meant funds were low and not enough to make the purchase. It so happened that at the same time, Hospice of Medina County was looking for land on which to build a facility, preferably close to a park for the stress relief of families using their services. After conferring with the Mugrages, James worked out an agreement where Hospice purchased an 8acre strip of land sandwiched between State Route 18 on one side and the park on the other. Hospice paid a lower-than-value cost for the property to help the nonprofit get what it needed, while the funds raised from the sale were enough to help the park district purchase the Chippewa Lake acreage that it was struggling to save. James said he likes to think of it as trading 8 acres (at the park) for 360 acres (Chippewa Lake). “Being able to be involved in both of those parks, it was gratifying to work with those folks so they could be a part of the planning and get to see people enjoying their gift,” said James. When the Medina United Methodist Church moved from Medina’s Public Square to Fenn Road, James was co-chair of the building committee. The development of the church’s property included installing a trail and a chapel in the woods that butt up to Lake Medina, helping to ensure more connected green space that will be safe from

development. James said that on a clear day, the lake can be seen from the chapel. While he did not make the decisions regarding the land’s management and layout, James’ eyes twinkle as he says, “I certainly encouraged it.” James said that, just like for the arts in schools, people question the economic value of supporting parks. He points out that it is impossible to prove the exact financial gain an area has from preserving land. For example, a rare bird at Allardale one year had people traveling from around the world to spot it, and those people spent money on food, lodging and more while they were here but there was no way to track it. Another example was when the Smithsonian was studying neotropical birds at River Styx Park, which not only directly helped the local economy but also gave publicity to the area. While James still keeps watch over what happens in the district and is available to help if needed, the new director, Nate Eppink, is already showing what he can do. Eppink worked with James for most of 2018 to ensure a smooth transition in the district’s leadership. “Tom was very good at leveraging tax dollars,” Eppink said, adding that James brought in a total of $8 million to restore and acquire land for preservation. He said the district’s current levy does not expire until 2026. “They (James and the park district’s board) set up this park district to succeed,” Eppink said. Even though he is in awe of what James was able to accomplish in his years with the district, Eppink said the mentoring he received from James has made him feel up to the task of building on the foundation that James laid. “I’m not the new Tom, I’m just carrying the torch,” Eppink said. Eppink, like James, also did not plan a career of working in parks, in spite of his deep love of nature and preservation. He attended Cleveland State University, earned a bachelor’s and master’s in communications, and said he planned a career working in public relations or broadcast. “I always envisioned working in radio,” he said.