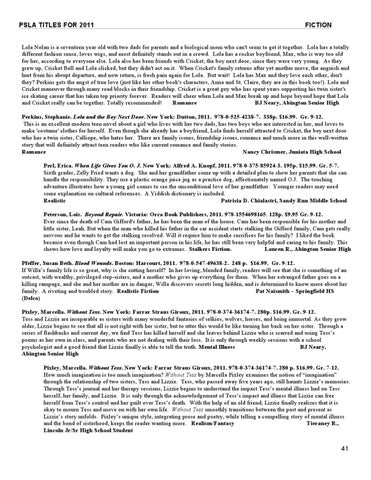 Lola Nolan is a seventeen year old with two dads for parents and a biological mom who can&#39;t seem to get it together. Lola has a totally different fashion sense, loves wigs, and most definitely stands out in a crowd. Lola has a rocker boyfriend, Max, who is way too old for her, according to everyone else. Lola also has been friends with Cricket, the boy next door, since they were very young. As they grew up, Cricket Bell and Lola clicked, but they didn&#39;t act on it. When Cricket&#39;s family returns after yet another move, the anguish and hurt from his abrupt departure, and now return, is fresh pain again for Lola. But wait! Lola has Max and they love each other, don&#39;t they? Perkins gets the angst of true love (just like her other book&#39;s characters, Anna and St. Claire, they are in this book too!). Lola and Cricket maneuver through many road blocks in their friendship. Cricket is a great guy who has spent years supporting his twin sister&#39;s ice skating career that has taken top priority forever. Readers will cheer when Lola and Max break up and hope beyond hope that Lola and Cricket really can be together. Totally recommended! Romance BJ Neary, Abington Senior High Perkins, Stephanie. Lola and the Boy Next Door. New York: Dutton, 2011. 978-0-525-4238-7. 338p. $16.99. Gr. 9-12. This is an excellent modern teen novel about a girl who lives with her two dads, has two boys who are interested in her, and loves to make &#39;costume&#39; clothes for herself. Even though she already has a boyfriend, Lola finds herself attracted to Cricket, the boy next door who has a twin sister, Calliope, who hates her. There are family issues, friendship issues, romance and much more in this well-written story that will definitely attract teen readers who like current romance and family stories. Romance Nancy Chrismer, Juniata High School Perl, Erica. When Life Gives You O. J. New York: Alfred A. Knopf, 2011. 978-0-375-85924-3. 195p. $15.99. Gr. 5-7. Sixth grader, Zelly Fried wants a dog. She and her grandfather come up with a detailed plan to show her parents that she can handle the responsibility. They use a plastic orange juice jug as a practice dog, affectionately named O.J. The touching adventure illustrates how a young girl comes to see the unconditional love of her grandfather. Younger readers may need some explanation on cultural references. A Yiddish dictionary is included. Realistic Patricia D. Chialastri, Sandy Run Middle School Peterson, Lois. Beyond Repair. Victoria: Orca Book Publishers, 2011. 978-1554698165. 128p. $9.95 Gr. 9-12. Ever since the death of Cam Gifford&#39;s father, he has been the man of the house. Cam has been responsible for his mother and little sister, Leah. But when the man who killed his father in the car accident starts stalking the Gifford family, Cam gets really nervous and he wants to get the stalking resolved. Will it require him to make sacrifices for his family? I liked the book because even though Cam had lost an important person in his life, he has still been very helpful and caring to his family. This shows how love and loyalty will make you go to extremes. Stalkers Fiction. Lauren R., Abington Senior High Pfeffer, Susan Beth. Blood Wounds. Boston: Harcourt, 2011. 978-0-547-49638-2. 248 p. $16.99. Gr. 9-12. If Willa’s family life is so great, why is she cutting herself? In her loving, blended family, readers will see that she is something of an outcast, with wealthy, privileged step-sisters, and a mother who gives up everything for them. When her estranged father goes on a killing rampage, and she and her mother are in danger, Willa discovers secrets long hidden, and is determined to know more about her family. A riveting and troubled story. Realistic Fiction Pat Naismith – Springfield HS (Delco) Pixley, Marcella. Without Tess. New York: Farrar Straus Giroux, 2011. 978-0-374-36174-7. 280p. $16.99. Gr. 9-12. Tess and Lizzie are inseparable as sisters with many wonderful fantasies of selkies, wolves, horses, and being immortal. As they grow older, Lizzie begins to see that all is not right with her sister, but to utter this would be like turning her back on her sister. Through a series of flashbacks and current day, we find Tess has killed herself and she leaves behind Lizzie who is scarred and using Tess’s poems as her own in class, and parents who are not dealing with their loss. It is only through weekly sessions with a school psychologist and a good friend that Lizzie finally is able to tell the truth. Mental Illness BJ Neary, Abington Senior High Pixley, Marcella. Without Tess. New York: Farrar Straus Giroux, 2011. 978-0-374-36174-7. 280 p. $16.99. Gr. 7-12. How much imagination is too much imagination? Without Tess by Marcella Pixley examines the notion of “imagination” through the relationship of two sisters, Tess and Lizzie. Tess, who passed away five years ago, still haunts Lizzie’s memories. Through Tess’s journal and her therapy sessions, Lizzie begins to understand the impact Tess’s mental illness had on Tess herself, her family, and Lizzie. It is only through the acknowledgement of Tess’s impact and illness that Lizzie can free herself from Tess’s control and her guilt over Tess’s death. With the help of an old friend, Lizzie finally realizes that it is okay to mourn Tess and move on with her own life. Without Tess smoothly transitions between the past and present as Lizzie’s story unfolds. Pixley’s unique style, integrating prose and poetry, while telling a compelling story of mental illness and the bond of sisterhood, keeps the reader wanting more. Realism/Fantasy Tieraney R., Lincoln Jr/Sr High School Student 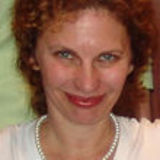