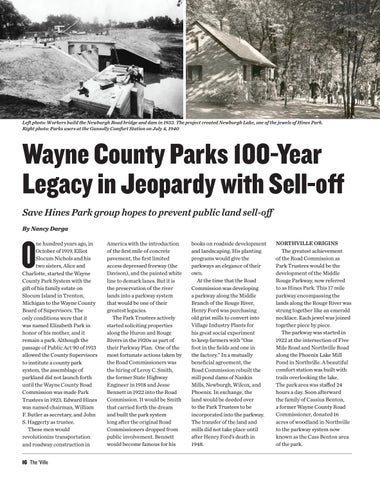 Left photo: Workers build the Newburgh Road bridge and dam in 1933. The project created Newburgh Lake, one of the jewels of Hines Park. Right photo: Parks users at the Gunsolly Comfort Station on July 4, 1940

ne hundred years ago, in October of 1919, Elliot Slocum Nichols and his two sisters, Alice and Charlotte, started the Wayne County Park System with the gift of his family estate on Slocum Island in Trenton, Michigan to the Wayne County Board of Supervisors. The only conditions were that it was named Elizabeth Park in honor of his mother, and it remain a park. Although the passage of Public Act 90 of 1913 allowed the County Supervisors to institute a county park system, the assemblage of parkland did not launch forth until the Wayne County Road Commission was made Park Trustees in 1923. Edward Hines was named chairman, William F. Butler as secretary, and John S. Haggerty as trustee. These men would revolutionize transportation and roadway construction in

America with the introduction of the first mile of concrete pavement, the first limited access depressed freeway (the Davison), and the painted white line to demark lanes. But it is the preservation of the river lands into a parkway system that would be one of their greatest legacies. The Park Trustees actively started soliciting properties along the Huron and Rouge Rivers in the 1920s as part of their Parkway Plan. One of the most fortunate actions taken by the Road Commissioners was the hiring of Leroy C. Smith, the former State Highway Engineer in 1918 and Jesse Bennett in 1922 into the Road Commission. It would be Smith that carried forth the dream and built the park system long after the original Road Commissioners dropped from public involvement. Bennett would become famous for his

books on roadside development and landscaping. His planting programs would give the parkways an elegance of their own. At the time that the Road Commission was developing a parkway along the Middle Branch of the Rouge River, Henry Ford was purchasing old grist mills to convert into Village Industry Plants for his great social experiment to keep farmers with “One foot in the fields and one in the factory.” In a mutually beneficial agreement, the Road Commission rebuilt the mill pond dams of Nankin Mills, Newburgh, Wilcox, and Phoenix. In exchange, the land would be deeded over to the Park Trustees to be incorporated into the parkway. The transfer of the land and mills did not take place until after Henry Ford’s death in 1948.

NORTHVILLE ORIGINS The greatest achievement of the Road Commission as Park Trustees would be the development of the Middle Rouge Parkway, now referred to as Hines Park. This 17 mile parkway encompassing the lands along the Rouge River was strung together like an emerald necklace. Each jewel was joined together piece by piece. The parkway was started in 1922 at the intersection of Five Mile Road and Northville Road along the Phoenix Lake Mill Pond in Northville. A beautiful comfort station was built with trails overlooking the lake. The park area was staffed 24 hours a day. Soon afterward the family of Cassius Benton, a former Wayne County Road Commissioner, donated 16 acres of woodland in Northville to the parkway system now known as the Cass Benton area of the park. 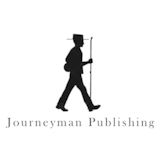