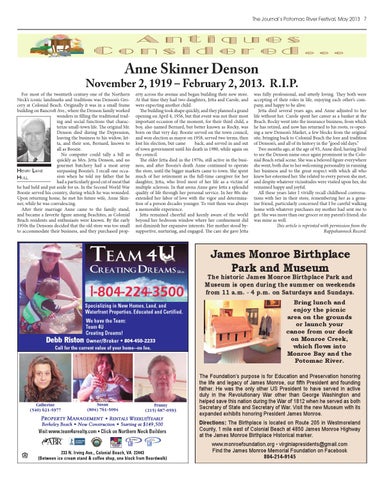 The Journal’s Potomac River Festival, May 2013 7

For most of the twentieth century one of the Northern Neck’s iconic landmarks and traditions was Denson’s Grocery at Colonial Beach. Originally it was in a small frame building on Bancroft Ave., where the Denson family worked wonders in filling the traditional trading and social functions that characterize small-town life. The original Mr. Denson died during the Depression, leaving the business to his widow, Jetta, and their son, Bernard, known to all as Boozie. No computer could tally a bill as quickly as Mrs. Jetta Denson, and no gourmet butchery had a meat array Henry Lane surpassing Boozie’s. I recall one occasion when he told my father that he Hull had a particularly good cut of meat that he had held and put aside for us. In the Second World War Boozie served his country, during which he was wounded. Upon returning home, he met his future wife, Anne Skinner, while he was convalescing. After their marriage Anne came to the family stand, and became a favorite figure among Beachites, as Colonial Beach residents and enthusiasts were known. By the early 1950s the Densons decided that the old store was too small to accommodate their business, and they purchased prop-

erty across the avenue and began building their new store. At that time they had two daughters, Jetta and Carole, and were expecting another child. The building took shape quickly, and they planned a grand opening on April 4, 1956, but that event was not their most important occasion of the moment, for their third child, a boy, also named Bernard, but better known as Rocky, was born on that very day. Boozie served on the town council, and won election as mayor on 1958, served two terms, then lost his election, but came back, and served in and out of town government until his death in 1980, while again on the council. The elder Jetta died in the 1970s, still active in the business, and after Boozie’s death Anne continued to operate the store, until the bigger markets came to town. She spent much of her retirement as the full-time caregiver for her daughter, Jetta, who lived most of her life as a victim of multiple sclerosis. In that arena Anne gave Jetta a splendid quality of life through her personal service. In her 80s she extended her labor of love with the vigor and determination of a person decades younger. To visit them was always a memorable experience. Jetta remained cheerful and keenly aware of the world beyond her bedroom window where her confinement did not diminish her expansive interests. Her mother stood bysupportive, nurturing, and engaged. The care she gave Jetta

was fully professional, and utterly loving. They both were accepting of their roles in life, enjoying each other’s company, and happy to be alive. Jetta died several years ago, and Anne adjusted to her life without her. Carole spent her career as a banker at the Beach. Rocky went into the insurance business, from which he has retired, and now has returned to his roots, re-opening a new Denson’s Market, a few blocks from the original site, bringing back to Colonial Beach the lore and tradition of Denson’s, and all of its history in the “good old days.” Two months ago, at the age of 93, Anne died, having lived to see the Denson name once again prominent in the Colonial Beach retail scene. She was a beloved figure everywhere she went, both due to her welcoming personality in running her business and to the great respect with which all who knew her esteemed her. She related to every person she met, and despite whatever vicissitudes were visited upon her, she remained happy and joyful. All these years later I vividly recall childhood conversations with her in their store, remembering her as a genuine friend, particularly concerned that I be careful walking home with whatever purchases my mother had sent me to get. She was more than our grocer or my parent’s friend; she was mine as well. This article is reprinted with permission from the Rappahannock Record.

The historic James Monroe Birthplace Park and Museum is open during the summer on weekends from 11 a.m. - 4 p.m. on Saturdays and Sundays. Specializing in New Homes, Land, and Waterfront Properties. Educated and Certified.

We have the Team: Team 4U Creating Dreams!

Bring lunch and enjoy the picnic area on the grounds or launch your canoe from our dock on Monroe Creek, which flows into Monroe Bay and the Potomac River. The Foundation’s purpose is for Education and Preservation honoring the life and legacy of James Monroe, our ﬁfth President and founding father. He was the only other US President to have served in active duty in the Revolutionary War other than George Washington and helped save this nation during the War of 1812 when he served as both Secretary of State and Secretary of War. Visit the new Museum with its expanded exhibits honoring President James Monroe. Directions: The Birthplace is located on Route 205 in Westmoreland County, 1 mile east of Colonial Beach at 4850 James Monroe Highway at the James Monroe Birthplace Historical marker. www.monroefoundation.org • virginiapresidents@gmail.com Find the James Monroe Memorial Foundation on Facebook 804-214-9145