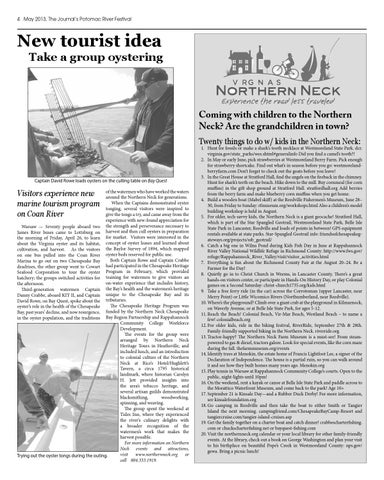 4 May 2013, The Journal’s Potomac River Festival

Coming with children to the Northern Neck? Are the grandchildren in town?

Twenty things to do w/ kids in the Northern Neck:

of the watermen who have worked the waters around the Northern Neck for generations. When the Captains demonstrated oyster tonging, several visitors were inspired to give the tongs a try, and came away from the experience with new-found appreciation for Warsaw — Seventy people aboard two the strength and perseverance necessary to James River buses came to Lottsburg on harvest and then cull oysters in preparation the morning of Friday, April 26, to learn for market. Visitors were interested in the about the Virginia oyster and its habitat, concept of oyster leases and learned about cultivation, and harvest. As the visitors the Baylor Survey of 1894, which mapped on one bus pulled into the Coan River oyster beds reserved for public use. Both Captain Rowe and Captain Crabbe Marina to go out on two Chesapeake Bay deadrises, the other group went to Cowart had participated in the Chesapeake Heritage Seafood Corporation to tour the oyster Program in February, which provided hatchery; the groups switched activities for training for watermen to give visitors an on-water experience that includes history, the afternoon. Third-generation watermen Captain the Bay’s health and the watermen’s heritage Danny Crabbe, aboard KIT II, and Captain unique to the Chesapeake Bay and its David Rowe, on Bay Quest, spoke about the tributaries. The Chesapeake Heritage Program was oyster’s role in the health of the Chesapeake Bay, past years’ decline, and now resurgence, funded by the Northern Neck Chesapeake in the oyster population, and the traditions Bay Region Partnership and Rappahannock Community College Workforce Development. The events for the group were arranged by Northern Neck Heritage Tours in Heathsville, and included lunch, and an introduction to colonial culture of the Northern Neck at Rice’s Hotel/Hughlett’s Tavern, a circa 1795 historical landmark, where historian Carolyn H. Jett provided insights into the area’s tobacco heritage, and several artisan guilds demonstrated blacksmithing, woodworking, spinning, and weaving. The group spent the weekend at Tides Inn, where they experienced the river’s culinary delights with a broader recognition of the watermen’s work that makes the harvest possible. For more information on Northern Neck events and attractions, visit www.northernneck.org or Trying out the oyster tongs during the outing. call 804.333.1919.

1. Hunt for fossils or make a shark’s tooth necklace at Westmoreland State Park. dcr. virginia.gov/state_parks/wes.shtml#generalinfo Did you find a camel’s tooth?! 2. In May or early June, pick strawberries at Westmoreland Berry Farm. Pick enough for strawberry shortcake. Find out what’s in season before you go: westmorelandberryfarm.com Don’t forget to check out the goats before you leave! 3. In the Great House at Stratford Hall, find the angels on the fireback in the chimney. Hunt for shark’s teeth on the beach. Hike down to the mill. Buy cornmeal (for corn muffins) in the gift shop ground at Stratford Hall. stratfordhall.org Add berries from the berry farm and make blueberry corn muffins when you get home. 4. Build a wooden boat (Mabel skiff) at the Reedville Fishermen’s Museum, June 28– 30, from Friday to Sunday: rfmuseum.org/workshops.html Also a children’s model building workshop is held in August. 5. For older, tech-savvy kids, the Northern Neck is a giant geocache! Stratford Hall, which is part of the Star Spangled Geotrail, Westmoreland State Park, Belle Isle State Park in Lancaster, Reedville and loads of points in between! GPS equipment rentals available at state parks. Star-Spangled Geotrail info: friendsofchesapeakegateways.org/projects/ssb_geotrail/ 6. Catch a big one in Wilna Pond during Kids Fish Day in June at Rappahannock River Valley National Wildlife Refuge in Richmond County: http://www.fws.gov/ refuge/Rappahannock_River_Valley/visit/visitor_activities.html 7. Everything is fun about the Richmond County Fair at the August 20–24. Be a Farmer for the Day! 8. Quietly go in to Christ Church in Weems, in Lancaster County. There’s a great hands-on visitors center, or participate in Hands-On History Day, or play Colonial games on a Second Saturday: christ-church1735.org/kids.html 9. Take a free ferry ride (in the car) across the Corrotoman (upper Lancaster, near Merry Point) or Little Wicomico Rivers (Northumberland, near Reedville). 10. Where’s the playground? Climb over a giant crab at the playground in Kilmarnock, on Waverly Avenue, or at Belle Isle State Park, for ages 5-12. 11. Reach the Beach! Colonial Beach, Vir-Mar Beach, Westland Beach – to name a few! colonialbeach.org 12. For older kids, ride in the biking festival, RiverRide, September 27th &amp; 28th. Family-friendly supported biking in the Northern Neck. riverride.org 13. Tractor-happy? The Northern Neck Farm Museum is a must-see! From steampowered to gas &amp; diesel, tractors galore. Look for special events, like the corn maze during the fall. thefarmmuseum.org/events 14. Identify trees at Menokin, the estate home of Francis Lightfoot Lee, a signer of the Declaration of Independence. The house is a partial ruin, so you can walk around it and see how they built homes many years ago. Menokin.org 15. Play tennis in Warsaw at Rappahannock Community College’s courts. Open to the public, night-lights until 10pm! 16. On the weekend, rent a kayak or canoe at Belle Isle State Park and paddle across to the Morattico Waterfront Museum, and come back to the park! Age 10+ 17. September 21 is Kinsale Day—and a Rubber Duck Derby! For more information, see kinsalefoundation.org 18. Go camping in Reedville and then take the boat to either Smith or Tangier Island the next morning. campingfriend.com/ChesapeakeBayCamp-Resort and tangiercruise.com/tangier-island-cruises.asp 19. Get the family together on a charter boat and catch dinner! crabbescharterfishing. com or chuckscharterfishing.net or bayquest-fishing.com 20. Visit the northernneck.org calendar or your local library for other family-friendly events. At the library, check out a book on George Washington and plan your visit to his birthplace on beautiful Pope’s Creek in Westmoreland County: nps.gov/ gewa. Bring a picnic lunch!