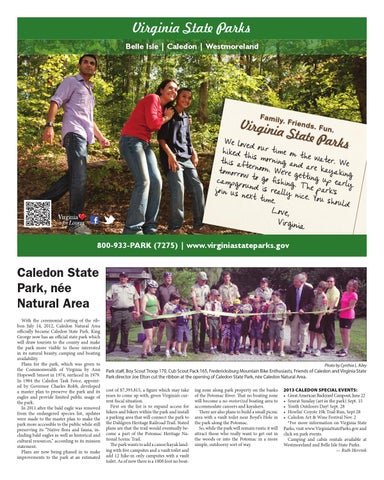 We love d hiked t our time on t hi h this af s morning and e water. We te tomorro rnoon. We’re g are kayaking w et campgr to go ﬁshing. ting up early ou The pa join us nd is really r nice. Yo k’s next ti u shoul me. d

Caledon State Park, née Natural Area With the ceremonial cutting of the ribbon July 14, 2012, Caledon Natural Area officially became Caledon State Park. King George now has an official state park which will draw tourists to the county and make the park more visible to those interested in its natural beauty, camping and boating availability. Plans for the park, which was given to the Commonwealth of Virginia by Ann Hopewell Smoot in 1974, surfaced in 1979. In 1984 the Caledon Task Force, appointed by Governor Charles Robb, developed a master plan to preserve the park and its eagles and provide limited public usage of the park. In 2011 after the bald eagle was removed from the endangered species list, updates were made to the master plan to make the park more accessible to the public while still preserving its “Native flora and fauna, including bald eagles as well as historical and cultural resources,” according to its mission statement. Plans are now being phased in to make improvements to the park at an estimated

Park staff, Boy Scout Troop 170, Cub Scout Pack 165, Fredericksburg Mountain Bike Enthusiasts, Friends of Caledon and Virginia State Park director Joe Elton cut the ribbon at the opening of Caledon State Park, née Caledon Natural Area. cost of $7,393,815, a figure which may take years to come up with, given Virginia’s current fiscal situation. First on the list is to expand access for hikers and bikers within the park and install a parking area that will connect the park to the Dahlgren Heritage Railroad Trail. Stated plans are that the trail would eventually become a part of the Potomac Heritage National Scenic Trail. The park wants to add a canoe/kayak landing with five campsites and a vault toilet and add 12 hike-in only campsites with a vault toilet. As of now there is a 1000 foot no boat-

ing zone along park property on the banks of the Potomac River. That no boating zone will become a no motorized boating area to accommodate canoers and kayakers. There are also plans to build a small picnic area with a vault toilet near Boyd’s Hole in the park along the Potomac. So, while the park will remain rustic it will attract those who really want to get out in the woods or into the Potomac in a more simple, outdoorsy sort of way.