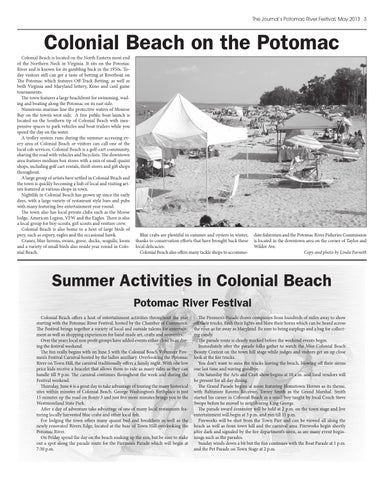 The Journal’s Potomac River Festival, May 2013 3

Colonial Beach on the Potomac Colonial Beach is located on the North Eastern most end of the Northern Neck in Virginia. It sits on the Potomac River and is known for its gambling back in the 1950s. Today visitors still can get a taste of betting at Riverboat on The Potomac which features Off-Track Betting, as well as both Virginia and Maryland lottery, Keno and card game tournaments. The town features a large beachfront for swimming, wading and boating along the Potomac on its east side. Numerous marinas line the protective waters of Monroe Bay on the town’s west side. A free public boat launch is located on the Southern tip of Colonial Beach with inexpensive spaces to park vehicles and boat trailers while you spend the day on the water. A trolley system runs during the summer accessing every area of Colonial Beach or visitors can call one of the local cab services. Colonial Beach is a golf-cart community, sharing the road with vehicles and bicyclists. The downtown area features medium box stores with a mix of small quaint shops, including golf cart rentals, thrift stores and gift shops throughout. A large group of artists have settled in Colonial Beach and the town is quickly becoming a hub of local and visiting artists featured at various shops in town. Nightlife in Colonial Beach has grown up since the early days, with a large variety of restaurant style bars and pubs with many featuring live entertainment year round. The town also has local private clubs such as the Moose lodge, American Legion, VFW and the Eagles. There is also a local group for boy-scouts, girl scouts and venture crew. Colonial Beach is also home to a host of large birds of prey, such as osprey, eagles and the occasional hawk. Cranes, blue herons, swans, geese, ducks, seagulls, loons and a variety of small birds also reside year round in Colonial Beach.

Blue crabs are plentiful in summer and oysters in winter, thanks to conservation efforts that have brought back these local delicacies. Colonial Beach also offers many tackle shops to accommo-

date fishermen and the Potomac River Fisheries Commission is located in the downtown area on the corner of Taylor and Wilder Ave. Copy and photo by Linda Farneth

Summer Activities in Colonial Beach Potomac River Festival Colonial Beach offers a host of entertainment activities throughout the year starting with the Potomac River Festival, hosted by the Chamber of Commerce. The Festival brings together a variety of local and outside talents for entertainment as well as shopping experiences for hand made art, crafts and souvenirs. Over the years local non profit groups have added events either close to or during the festival weekend. The fun really begins with on June 5 with the Colonial Beach Volunteer Firemen’s Festival Carnival hosted by the ladies auxiliary. Overlooking the Potomac River on Town Hill, the carnival traditionally offers a family night. With one low price kids receive a bracelet that allows them to ride as many rides as they can handle till 9 p.m. The carnival continues throughout the week and during the Festival weekend. Thursday, June 6 is a great day to take advantage of touring the many historical sites within minutes of Colonial Beach. George Washington’s Birthplace is just 15 minutes up the road on Route 3 and just five more minutes brings you to the Westmoreland State Park. After a day of adventure take advantage of one of many local restaurants featuring locally harvested blue crabs and other local fish. For lodging the town offers many quaint bed and breakfasts as well as the newly renovated Rivers Edge, located at the base of Town Hill overlooking the Potomac River. On Friday spend the day on the beach soaking up the sun, but be sure to stake out a spot along the parade route for the Firemen’s Parade which will begin at 7:30 p.m.

The Firemen’s Parade draws companies from hundreds of miles away to show off their trucks, flash their lights and blare their horns which can be heard across the river as far away as Maryland. Be sure to bring earplugs and a bag for collecting candy. The parade route is clearly marked before the weekend events begin. Immediately after the parade folks gather to watch the Miss Colonial Beach Beauty Contest on the town hill stage while judges and visitors get an up close look at the fire trucks. You don’t want to miss the trucks leaving the beach, blowing off their sirens one last time and waving goodbye. On Saturday the Arts and Craft show begins at 10 a.m. and food vendors will be present for all day dining. The Grand Parade begins at noon featuring Hometown Heroes as its theme, with Baltimore Ravens Receiver, Torrey Smith as the Grand Marshal. Smith started his career in Colonial Beach as a small boy taught by local Coach Steve Swope before he moved to neighboring King George. The parade award ceremony will be held at 2 p.m. on the town stage and live entertainment will begin at 3 p.m. and run till 11 p.m. Fireworks will be shot from the Town Pier and can be viewed all along the beach as well as from town hill and the carnival area. Fireworks begin shortly after dark and signaled by the fire department’s siren, as are many event beginnings such as the parades. Sunday winds down a bit but the fun continues with the Boat Parade at 1 p.m. and the Pet Parade on Town Stage at 2 p.m.