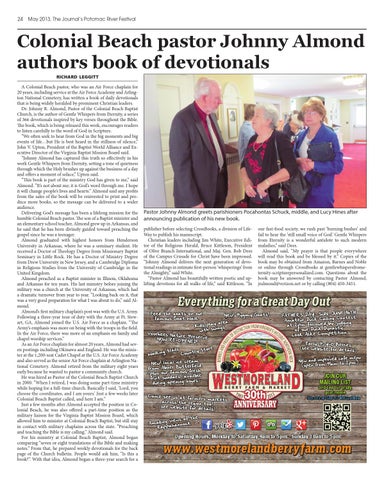 May 2013, The Journal’s Potomac River Festival

Colonial Beach pastor Johnny Almond authors book of devotionals Richard Leggitt A Colonial Beach pastor, who was an Air Force chaplain for 20 years, including service at the Air Force Academy and Arlington National Cemetery, has written a book of daily devotionals that is being widely heralded by prominent Christian leaders. Dr. Johnny R. Almond, Pastor of the Colonial Beach Baptist Church, is the author of Gentle Whispers from Eternity, a series of 366 devotionals inspired by key verses throughout the Bible. The book, which is being released this week, encourages readers to listen carefully to the word of God in Scripture. “We often seek to hear from God in the big moments and big events of life…but He is best heard in the stillness of silence,” John V. Upton, President of the Baptist World Alliance and Executive Director of the Virginia Baptist Mission Board said. “Johnny Almond has captured this truth so effectively in his work Gentle Whispers from Eternity, setting a tone of quietness through which the Holy brushes up against the business of a day and offers a moment of solace,” Upton said. “This book is part of the ministry God has given to me,” said Almond. “It’s not about me; it is God’s word through me. I hope it will change people’s lives and hearts.” Almond said any profits from the sales of the book will be reinvested to print and produce more books, so the message can be delivered to a wider audience. Delivering God’s message has been a lifelong mission for the humble Colonial Beach pastor. The son of a Baptist minister and an elementary school teacher, Almond grew up in Arkansas, and he said that he has been divinely guided toward preaching the gospel since he was a teenager. Almond graduated with highest honors from Henderson University in Arkansas, where he was a seminary student. He received a Doctor of Theology Degree from Missionary Baptist Seminary in Little Rock. He has a Doctor of Ministry Degree from Drew University in New Jersey, and a Cambridge Diploma in Religious Studies from the University of Cambridge in the United Kingdom. Almond preached as a Baptist minister in Illinois, Oklahoma and Arkansas for ten years. His last ministry before joining the military was a church at the University of Arkansas, which had a dramatic turnover from year to year. “Looking back on it, that was a very good preparation for what I was about to do,” said Almond. Almond’s first military chaplain’s post was with the U.S. Army. Following a three-year tour of duty with the Army at Ft. Stewart, GA, Almond joined the U.S. Air Force as a chaplain. “The Army’s emphasis was more on being with the troops in the field. In the Air Force, there was more of an emphasis on family and chapel worship services.” As an Air Force chaplain for almost 20 years, Almond had seven postings including Okinawa and England. He was the minister at the 1,200-seat Cadet Chapel at the U.S. Air Force Academy and also served as the senior Air Force chaplain at Arlington National Cemetery. Almond retired from the military eight years early because he wanted to pastor a community church. He was hired as Pastor of the Colonial Beach Baptist Church in 2000. “When I retired, I was doing some part-time ministry while hoping for a full-time church. Basically I said, ‘Lord, you choose the coordinates, and I am yours.’ Just a few weeks later Colonial Beach Baptist called, and here I am.” Just a few months after Almond accepted the position in Colonial Beach, he was also offered a part-time position as the military liaison for the Virginia Baptist Mission Board, which allowed him to minister at Colonial Beach Baptist, but still stay in contact with military chaplains across the state. “Preaching and teaching the Bible is my calling,” Almond said. For his ministry at Colonial Beach Baptist, Almond began comparing “seven or eight translations of the Bible and making notes.” From that, he prepared weekly devotionals for the back page of the Church bulletin. People would ask him, “Is this a book?”. With that idea, Almond began a three-year search for a

Pastor Johnny Almond greets parishioners Pocahontas Schuck, middle, and Lucy Hines after announcing publication of his new book. publisher before selecting CrossBooks, a division of LifeWay to publish his manuscript. Christian leaders including Jim White, Executive Editor of the Religious Herald, Bruce Kittleson, President of Olive Branch International, and Maj. Gen. Bob Dees of the Campus Crusade for Christ have been impressed. “Johnny Almond delivers the next generation of devotional readings in intimate first-person ‘whisperings’ from the Almighty,” said White. “Pastor Almond has beautifully written poetic and uplifting devotions for all walks of life,” said Kittleson. “In

our fast-food society, we rush past ‘burning bushes’ and fail to hear the ‘still small voice of God.’ Gentle Whispers from Eternity is a wonderful antidote to such modern maladies,” said Dees. Almond said, “My prayer is that people everywhere will read this book and be blessed by it.” Copies of the book may be obtained from Amazon, Barnes and Noble or online through CrossBooks at gentlewhispersfrometernity-scripturepersonalized.com. Questions about the book may be answered by contacting Pastor Almond, jralmond@verizon.net or by calling (804) 450-3451.

Everything for a Great Day Out

and see our crazy goat movie

Opening Hours; Monday to Saturday 9am to 5pm. Sunday 10am to 5pm.